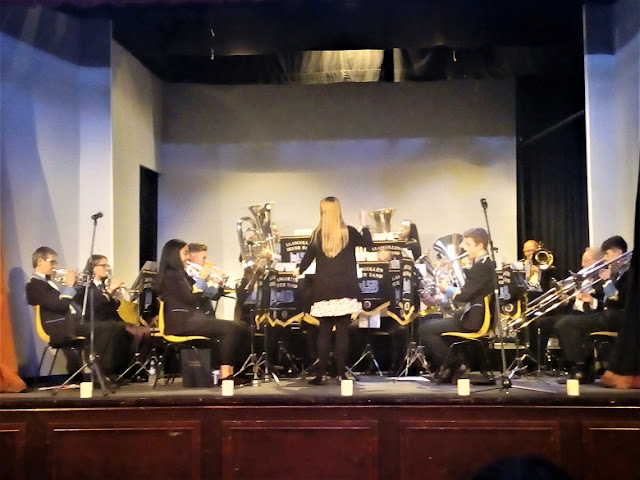 A moving Festival of Remembrance was held at the Town Hall last night (Saturday).

Llangollen Remembers, hosted by the Town Council and featuring performances by professional actors and the Silver Band, was even more poignant than usual as it marked 100 years since the end of World War One.

First on the programme was a sing-along session, accompanied on the keyboard by Chris Simms, which saw the audience joining in with popular songs from the First and Second World Wars, such as It's a Long Way to Tipperary and Pack Up Your Troubles in Your Old Kit Bag.

Eleri Jones along with her colleague Sam Jones from Theatr Equapoise then presented a tribute to the Welsh poet known as Hedd Wyn who was killed in 1917 while fighting on the Western Front only weeks before winning a bardic chair.

A reading was presented by Deputy Mayor, Cllr Murray Richards, from the stage before the Silver Band, conducted by Mia Thomas, ended the first half of the programme with rousing World War One numbers such as Hello, Hello Whose Your Lady Friend and Blighty.

The second half revolved around a drumhead service, conducted by the Venerable Chris Potter, of the type often attended by troops before they went into battle.

Prayers were interspersed with hymns, including Abide With Me and Calon Lan.

The Act of Remembrance, including bugle calls and the parading of standards by members from the local branches of the Royal British Legion and Royal Naval Association, was brought to  a moving close by the symbolic release of scores blood-red poppy petals from the balcony.

Later this morning, from 10.30am, the annual Service of Remembrance will be held - against a backdrop of over 3,000 locally hand-made poppies, at the town's new Centenary Square.
Posted by llanblogger at 7:53 AM