Berwyn railway station stands prominently alongside the A5 road just over a mile east of Llangollen in North East Wales.


It was built to primarily serve the needs of the landed gentry who had established large estates in the vicinity.
The station opened in 1865 as an intermediate stop on the Llangollen & Corwen Railway, which ultimately became part of the Great Western Railway’s cross-country route linking Ruabon and Barmouth.
As space was at such a premium in the area, the station was built on a rock ledge cut into the southern side of a narrow gorge, overlooking the tumbling waters of the River Dee.
Whilst the station itself has a fascinating history in its own right and has since been preserved as part of the Llangollen Railway, it is not the main focus of this article.


For just metres away from the station’s platform can be found a series of poignant messages written by soldiers from the First World War. This is the story behind just some of these men, the structure they are on and the efforts being made now to conserve them.
From its opening until at least the mid-1890s, the station was connected by an access path to the Chain Bridge over the River Dee. This path crossed over the railway line at the eastern end of the platform and this became the scene for a fatal accident just a few days before Christmas in 1896.


On Tuesday 22nd December Charles Roberts, a blacksmith, and his wife Jane had been visiting friends near the station. Shortly after 9pm they were on their way home and as they approached the ungated crossing heard a train approaching them.
Assuming this was the mail train that was due to stop at Berwyn they continued across the track.  Unfortunately it was a ‘special’ put on to cope with the increased amounts of mail being carried in the run up to the festive period.
The crank of the steam locomotive caught the side of Jane Robert’s head and her body was found about fifteen yards from the crossing. Charles Roberts sued the Great Western Railway and received substantial damages.
The fatality and the increasing popularity of the walking route led to the Great Western Railway deciding to remove the crossing completely and replace it with a pedestrian underpass.


A steep pathway was excavated adjacent to the railway, almost as a continuation of the platform ramp, leading to a short 6-foot wide tunnel under the one railway track. The structure in itself may have been fairly unremarkable, but for the fact that it was finished in white glazed bricks.
The bricks seemed to have taken pencil markings readily, especially from the indelible type issued to soldiers during the First World War.

Teenage conscripts used their pencils to write notes on the subway's walls and many of these still survive today, albeit becoming increasingly at risk from water ingress and deterioration.
One entry on the walls shows that E. M. Morris and R. Roberts shared a cigarette together there on 6th July 1913.

By the time they returned on Christmas Day the following year, they had both enlisted in the Army and had quickly been promoted. Indeed R. Roberts signed his festive message with the ranking of a Lance Corporal. Some of the other scribblings indicated soldiers in light-hearted mood, including 'Balls from Belgium', 'Berlin Last Stop' and 'Hoof Hearted'.
Over subsequent years, the walls of the subway continued to attract more notes and messages in pencil up until at least the 1960s when the railway closed.

In our modern society, graffiti is often seen as defacement and vandalism in most situations. Yet after the passage of a century, the written WW1 messages on the subway walls have become poignant and important historical artefacts in their own right.
Despite the closure of the railway through Berwyn in 1965 and the subsequent removal of the railway track by 1968, the structure of the subway was retained.

However, this resulted in neglect and structural failures led to water ingress and deterioration of the pencil messages commencing.
The rebuilding of the line as part of the preserved Llangollen Railway and the subsequent piecemeal maintenance being afforded to the subway has reduced this deterioration somewhat.
However, in the 1990s the increasingly dilapidated condition of the nearby Chain Bridge resulted in its closure to the public. The connecting footpath from the station and associated subway were no longer part of a thoroughfare and began to deteriorate further.


During the mid-2000s the pencil messages were first spotted by David Gepp, a lecturer in photography at the Herefordshire College of Art. He recalled that ‘a friend said that there was a tunnel where soldiers used to hang around and have a fag. My wife and I went there and came across the name Alfred James Candy written on the wall of the tunnel. As we were going home I noticed a war memorial and pulled over to have a look. On the second line, there he was, Alfred James Candy’.
David Gepp’s discovery led to him arranging a temporary exhibition on the signatures in Llangollen’s Museum in 2007. This attracted considerable interest from the local media and the public, but unfortunately did not lead to any conservation work on the subway itself.


It was in their deteriorating and forlorn condition that I first came across the signatures whilst undertaking geology fieldwork in the area in 2011.
The following year I became a volunteer at Berwyn station and commenced a programme of regular vegetation clearance around the subway.
The nearby Chain Bridge reopened to the public amid much celebration in 2015 due to the sterling efforts of the local councils and the Heritage Lottery Fund. The restoration work on what is thought to be the oldest chain bridge in the world, also included resurfacing and restoration of the connecting path up to Berwyn station.
The increased footfall from visitors once again put the subway and pencil messages back into the public limelight. Efforts were made to increase public awareness through free information packs and temporary displays at the station, including the display of commemorative wreaths and even a GWR WW1 stretcher.


A major boost came over this past summer, when BBC Wales ran an article online about their significance and fears that they were being lost to the damp. Indeed water ingress has continued to deteriorate and engulf the pencil messages; with the central parts of the walls now almost entirely covered by algae.
Given the wider commemorations taking place and the increasing numbers of visitors passing through the subway, the media coverage has this time led to a concerted effort to ensure it is conserved and restored as sympathetically as possible.

With the blessing of the Llangollen Railway, I have been leading the conservation project and have been working closely with the Llangollen Museum, Denbighshire County Council and many other local stakeholders. Yet it is not as simple as just cleaning off the brick faces with soapy water – far from it!


One of the first stages is to tackle the problem of the water ingress in and around the structure. Groundwater confined within the natural mudstone bedrock in the area naturally seeps out of the retaining walls on the approach to the subway, whilst further east it passes at depth under the railway trackbed.
Rainwater also passes down through the stone ballast that supports the railway track over the subway. Over time, small-scale deterioration of the brickwork and metalwork has led to this water working its way through the structure and running down the white glazed bricks, leading to the build-up of algae over the pencil messages.
Drainage improvements will be required to capture the water from around the subway and deflect it away; either along the sides of the track or through pipe under the railway itself.

A new waterproof membrane is likely to be required over the subway to stop rainwater passing through the ballast and getting into the structure. This will require the lifting of the railway track and ballast from above the structure, which can only be carried out at a time when the Llangollen Railway’s heritage steam and diesel trains are not running, i.e. in either November, January and/or early February.
Once improvements to the drainage and structure are carried out, the then work can start in earnest in recording and conserving the signatures on the subway walls.

Methods of cleaning off the algae are currently being explored with specialist conservators and a number of Welsh universities. This will hopefully uncover many more signatures and poignant messages hidden on currently obscured parts of the glazed walls.
Volunteers at the Llangollen Museum have already begun researching some of the messages that are still visible on the subway’s walls. One of these is the message by AJ Candy spotted by David Gepp over a decade ago, which reads "I really want --is baby".

Research into Candy’s life and military career has revealed that he is incorrectly listed on the Llangollen war memorial and was actually named Albert rather than Alfred.
It transpires that Albert James Candy was born in Cardiff in July 1887. His father died when Albert was only three and tragically his mother died in May 1895. Albert and his older brother Frederick were soon admitted into an orphanage in Somerset, where the trail temporarily goes cold. However by 1911, he had found work at a bakers and confectioners’ shop in Llangollen.


There is currently no record of when he joined up, but from the Commonwealth War Graves we have found that on 17th April 1917 James Candy 675653, Royal Field Artillery, “D” Battery, 285 Brigade was killed. He was buried at plot 4, Row D, Grave 14 in Le Grand Hasard Military Cemetery, in Morbecque, Northern France.
Further research is ongoing into the other names presently uncovered on the subway walls including E M Morris and R Roberts.

It is hoped that as the project progresses we can discover more about the soldiers and locals who used the walls of the structure to record their messages and stories.
Any further information or assistance in researching the messages would be gratefully appreciated by myself and the other volunteers actively involved this project. 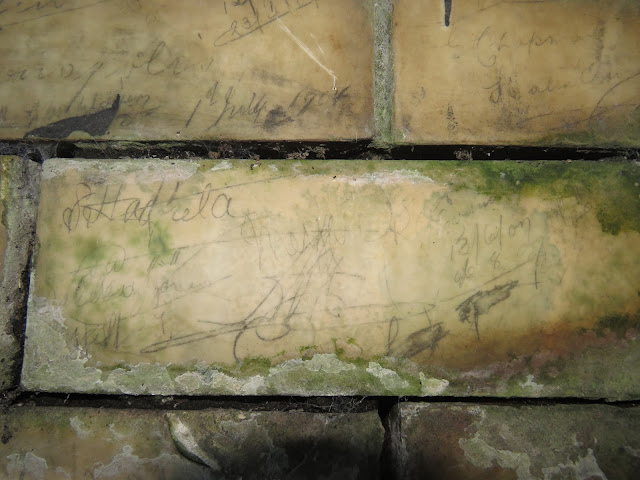 
Peter Dickinson is an active volunteer on the Llangollen Railway and his first book on the line, ‘Steam in the Dee Valley – From Ruabon to Corwen via Llangollen’ was published in 2015 to coincide with the 150th anniversary of the railway opening. His latest book ‘The Ruabon to Barmouth Line’ is due for release by Fonthill Media before the end of the year (ISBN: 978-1-78155-214-8) .


* Peter will be giving a talk at the Llangollen Museum entitled ‘Rails to the British Tyrol’ on Wednesday 27th February 2019, focussing on the history of the Llangollen & Corwen Railway and featuring the graffiti.
Posted by llanblogger at 6:46 AM