Llan's new vicar gets to know his parish 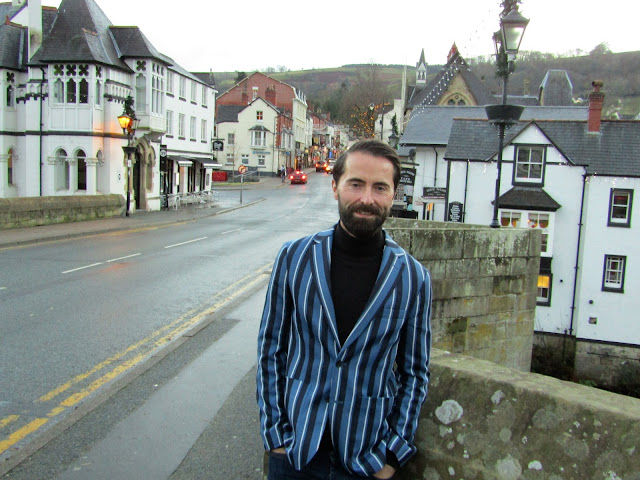 * Father Lee Taylor is getting to know his new parish.

The town’s new vicar is ready to officially start work in just over a week's time.
Since moving from his previous church in Croydon two weeks ago Father Lee Taylor has been busy getting to know his new parish of Llangollen, Llantysilio and Trevor before his licensing by the Bishop of St Asaph takes place at St Collen’s on Sunday December 9.
Since his arrival most of his time has been taken up with moving into the newly-refurbished vicarage on Abbey Road but he says he’s had a very warm welcome and enjoyed meeting a wide range of local people – both parishioners and otherwise.
Keen on keeping fit he’s already joined the leisure centre and the running club and had a rapid installation as a member of one of the Eisteddfod committees.
And he’s now looking forward to getting to know as many other groups and organisations as possible.
Born and brought up in Bolton, Lancashire, he studied theology at the University of Wales, Lampeter where he was also organ scholar and choirmaster.

After leaving university he worked at a busy call centre for the gas and electricity supplier Norweb Energi. At weekends he worked evenings at a local Working Men’s Club playing the organ before the main bingo session.

Father Lee moved to London in 2002 to take up the post of Deputy-Head Verger at Southwark Cathedral. During his time in London he also worked as a volunteer chaplaincy assistant at Guy’s & St Thomas’ hospitals.

In 2010 he left London to train for ordained ministry at Ripon College, Cuddesdon, serving his curacy in Leigh-on-Sea.

His last position was as Associate Vicar of Croydon Minster.

During his time there he worked hard at establishing partnerships with various organisations, business and charities around the town.

And he now aims to do the same sort of thing in Llangollen.

He said: “Since I arrived here a couple of weeks ago I’ve met a large number of people and had lots of invitations for coffee.

“I want to maintain the relationships the church already has with the community and also start up some new ones. It’s just a question of getting to know as many local groups as possible and working out who's who.

“I’ve had already accepted an invitation to join the music and staging committee at the Eisteddfod, which was very nice and I’m looking forward to playing a part in that.”

In his spare time Father Lee is passionate about and is a regular performer in old time music hall. He will retain his role as publicity officer for the Music Hall Society, which is based in London.

Apart from performing he also enjoys playing and composing music, ballroom dancing and the arts.
In fact, he says Llangollen’s very active arts scene was one of things that drew him to his new appointment.

“Music and performance is an intrinsic part of my priesthood,” he explained.

Father Lee also likes to keep himself fit and along with his two dogs, a Labrador and a Border Collie, he has sampled some of the country walks his new parish has to offer including those around Llantysilio and up to Dinas Bran Castle. Next, he reckons, is possibly a walking trip down the canal to the Aqueduct.

No stranger to the world of pubs since his mother ran two of them in Wigan, where he served behind the bar and played piano, he used this background to create what he reckons was one of his most exciting community ventures down in Croydon.

That’s when he organised and officiated at a beer blessing ceremony at the local Dog & Bull pub which hit the national headlines.

He recalled: “The event not only brought together a wide section of the community but it also signalled the open and welcoming face of the church in the heart of the community.”

And he promised: “Something similar is certainly on the cards for Llangollen – it’s just a question of which pub or hotel we do it in and at what time of the year. Eisteddfod week might be a good time because that’s when the town is full of people from around the world.

“I think we can look forward to lots of quirky things, ideas and initiatives, so watch this space.”

Before he starts on the beer blessing trail Father Lee has his own licensing by Bishop Gregory of St Asaph as part of the morning worship at St Collen’s on December 9.

“It will be a time when all the church family and those from the other churches in the area can gather together. Everyone is welcome and I’m told there will be a bit of a do in the parish rooms afterwards,” he said.
Posted by llanblogger at 6:52 AM