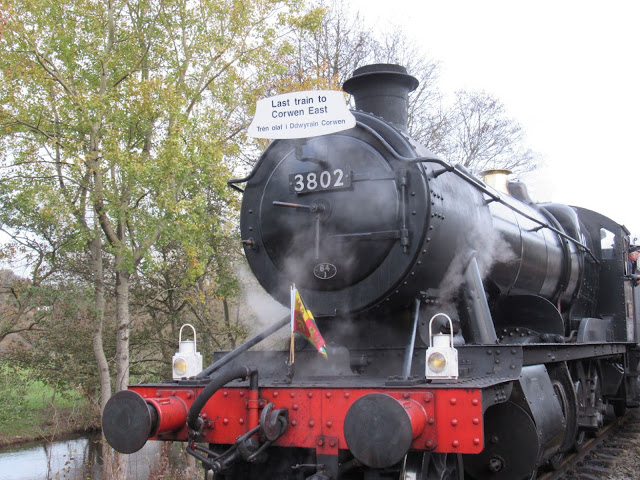 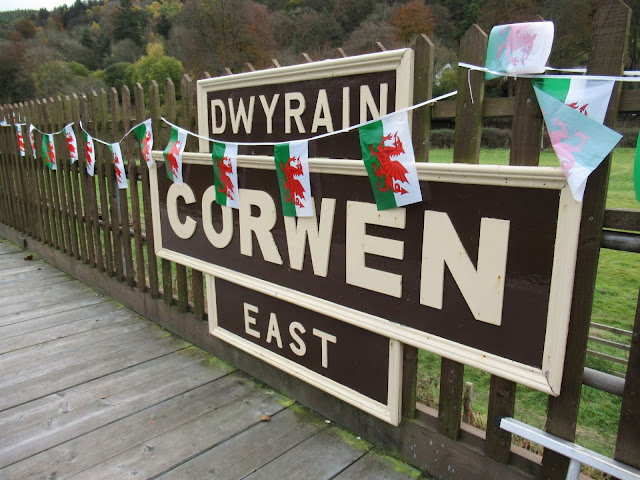 * The bilingual station name, the locomotive 3802 with commemorative decoration.

The final train of the 2018 season from Llangollen to Corwen departed last Sunday at 1510 with the locomotive No.3802 bedecked with a special train headboard.


As the last public service train to serve the temporary platform at Dwyrain Corwen East, a commemorative bilingual head board was provided with Welsh flags to mark the end of four years of successful operations to what has been the Phase 1 station of the Corwen extension project.

Fittingly, Number 3802 performed the honours, as it did with the first train on 22 October 2014 - even the same three Welsh flags were re-used and Harry Barber was the same driver.

This time the train was not topped and tailed with a second locomotive as in 2014 and 3802 alone performed the final propelling move back to Carrog with a select passenger complement of members and others on board to mark the end of an era.

A fortunate spell of blue sky for the 1540 arrival brightened the occasion when station staff were on hand with others to mark the occasion.

Their next task will be to start to dismantle the station facilities and prepare for a move to the new terminal station building which is in course of refurbishment alongside the town carpark.


The next train to Corwen will terminate at the Phase 2 station which is now under construction alongside the town's car park and will provide direct access from and to the town centre from a date to be announced in 2019.


Stationmaster Wayne Ronneback said: "Although provided as a temporary measure in 2014, the platform has been successful in introducing passengers to the western end of the line and has attracted a growing number of passengers to start their journey through the Dee Valley from Corwen.


"This was necessary whilst the project team tackled the immense task of building the Phase 2 station with a loop line to allow the train to terminate and for the locomotive to run round at the island platform in preparation for the return journey.


"As of a date to be announced in 2019,  visitors will be able to travel from and to the centre of Corwen where the train will stop over for a 20 minute interval. We expect the new arrangements to attract more visitors from a wider segment of the North Wales tourism market to come for the journey on the only standard gauge heritage railway in North Wales.


"For the winter season of Santa Trains and Mince Pie Specials trains will terminate at Carrog."
Posted by llanblogger at 6:52 AM