Play is a great way to start Christmas with a laugh 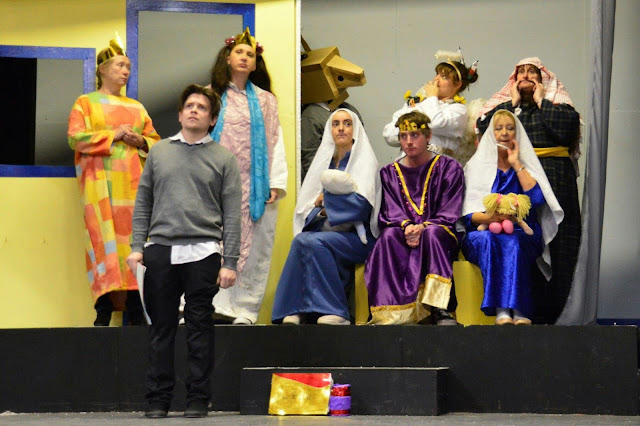 * The cast of The Flint Street Nativity.


And a lot of the things they come out with accurately reflect what their parents say and do.


That's the main premise of the play The Flint Street Nativity currently being staged by the Twenty Club at Llangollen Town Hall.


And an unholy piece of hilarity it turns into.


The plot is that grown-ups play a bunch of kids at Flint Street primary school - located somewhere near Llan in this instance but actually in Liverpool as originally imaged by author Tim Firth - as they perform their annual nativity.


We see them first at rehearsal where we hear them inserting into their own childish conversations the phrases they’ve picked up at home from listening to their sometimes dysfunctional parents.


Quite a bit of this stuff  is malicious but is used innocently by the children as weapons in their own little feuds with other members of the group.


This produces some delicious comedy such as when the Angel Gabriel, marvellously played by Twenty Club favourite Sue Griffiths, wills Hannah Edwards’s superb Virgin Mary to fall sick so that at the last minute she can take over that role herself.


There’s much more of this stuff and the laugh factor steps up significantly when the actual nativity performance gets underway.


Another memorable scenario stems from Mary and Joseph’s weary arrival at the inn to be greeted by Si Kneale deftly portraying a far-from-genial mine host. I won’t divulge what happens but don’t forget to look out for it.


Another stand-out performance comes from Nicola Holmwood as the Shepherd. She’s extremely believable as a little girl, right down to the perfectly-timed twitches, and delivers some real comedic gems.


James Broderick is sheer magic to watch and listen to as the Ass, so called because he spends most of the action wearing a big cardboard donkey head. However, that doesn’t prevent him perfectly delivering some of the play’s funniest moments.


Other neat performances come from Lizzie Clifford as Wise Gold – one of the Three Kings – Kevin Williams who gives a new twist to the Star of Bethlehem, Eiri Jones as The Angel, Joe Clifford as the Narrator, Gareth Edwards as Herod and Joseph and Rowena Owen as Wise Frankincense – just listen to how she delivers her character’s name with the lisp she puts on.


Why the various kids say the things they do become clearer when the actors appear as their respective parents in the final scene.


The play, which you can still catch this and tomorrow evening (Friday and Saturday, when it helps round off the town’s Christmas Festival) at 7.30pm, is a credit to John Clifford in his first directorial role and is a cracker of a way to start Christmas.