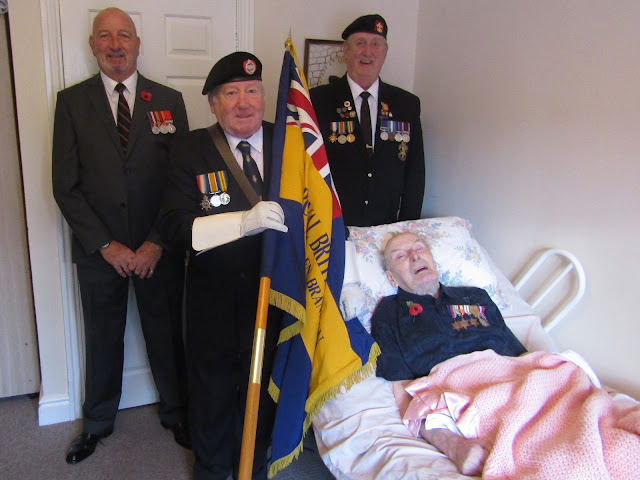 * The Royal British Legion group visit George Humphreys at the Old Vicarage.
Royal British Legion members in Llangollen had a special Remembrance Day meeting with a veteran of the Second World War this morning (Sunday).
As the country marked the 100th anniversary of the World War One Armistice Bethan Masceranhas, who runs the Old Vicarage nursing home, thought it would be nice to have someone from the Legion come in to meet 97-year-old resident George Humphreys who served in the army during World War Two.


And her invitation was quickly accepted by Llangollen branch chairman Phil Stroud who arranged to go along to the home before taking part in the annual Remembrance Parade in the town centre later in the morning.
He and colleagues Phil Silverton and David Thomas, who visited the First World War cemeteries back in the summer, brought along their branch standard and spent some time chatting to George before performing the Act of Remembrance for him at his bedside.


His son Phil, who lives in Llangollen, recalled that George, who is originally from Bangor of Dee, was called up for duty in 1941, joining the Royal Army Service Corps with which he served as driver/mechanic.
He took part in the Allied invasion of North Africa and Italy and fought through with the British Army’s 5 Corps all the way to Austria.


Leaving the army in 1946 he ran a coal merchants business in Bangor on Dee for over 60 years.
George was married to his wife Helen, whom he met while stationed during the war in Glasgow, in 1947 and the couple had two children, Phil and Alison, four grandchildren and eight great-grandchildren. Helen died four years ago.


For a number of years George, who moved into the Old Vicarage three years ago, was an active member of the Legion’s Bangor on Dee branch, of which he was a co-founder, and took a keen interest in the annual Poppy Appeal.
He also represented the branch on a number of occasions at the national Remembrance Service at the Cenotaph in London.


“When contacted by Bethan at the Old Vicarage to see if someone from the branch could go along to meet George on Remembrance Day I was delighted to help and it was a pleasure to meet an old soldier such as him particularly on this very special day,” said Llangollen RBL chairman Phil Stroud.
Posted by llanblogger at 12:35 PM