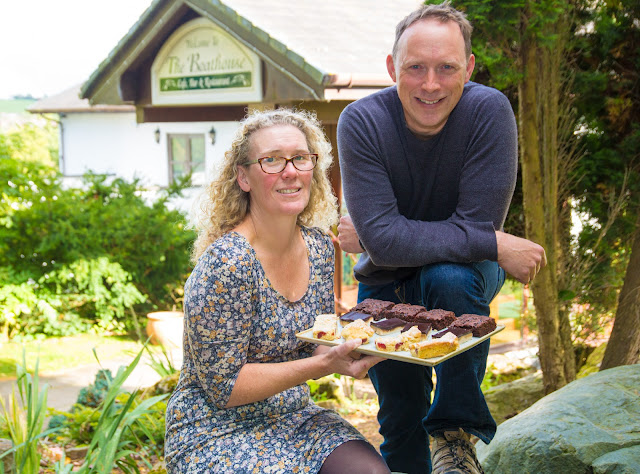 * Rachel Burns and Chris Spray, proprietor of The Boathouse at Chirk pub and restaurant.

A mum-of-three has launched a new business making vegan cakes - just a year after she turned her back on animal products.

Rachel Burns, 51, from Bwlchgwyn, near Wrexham, was inspired to become a vegan herself by one of her sons who has strong views on the subject.

She set up Rachel's Vegan Cakes in January and supplies her delicious homemade products to a network of local restaurants and bars across the region.

Now she's been given a boost by the Llangollen Food Festival who have agreed to provide her with a showcase in their new products section at this year's 20th anniversary event on Saturday and Sunday, October 14 and 15.

It's a big deal for Rachel because the event is now one of the highlights in the UK's culinary calendar and has been hailed as one of the top 10 food festivals in the UK by the Daily Telegraph and the Independent newspapers.

She said: “The organisers were offering a few free places for new producers to celebrate the festival’s 20th anniversary. To be honest I never thought I’d have a chance and was amazed when I heard I’d been granted a space.

“As a new business it’s exciting and I’m really looking forward to it. I’m nervous but in an excited way. I’m absolutely convinced my business can work.

“There is a real need for vegan friendly food. And not only vegans but people who have an intolerance to dairy products too.”

“When I go out for a meal I can usually find a vegan starter and main but rarely, if ever, find a vegan sweet. I know other vegans feel the same way and the vegan and vegetarian market is growing larger every year.

“I’ve always enjoyed visiting the Llangollen Food Festival and can’t believe I will be exhibiting there myself. It really is exciting.”

Rachel became a vegan herself so she could be sure to cook suitable food her 29 year old vegan son Matt when he called.

She said:  “I wanted to ensure I always had something to offer Matt that he could eat when he called and looked at how I could make cakes and sweets. For me it was more of a scientific experiment.

“I looked at things like chocolate brownies, cherry almond slices, carrot cake and Victoria sponges and wondered how I could make them so they tasted really good using only non-animal or dairy products.

“I use ingredients such as flax seeds, apple sauce and egg replacement powders and I also make some gluten free products too.

“I’ve always worked in catering but baking products for vegans made me realise just what you can do with different ingredients. We don’t need to use dairy or animal products to make good food and that led me down the path towards becoming a vegan myself.”

Rachel works as a school catering manager but has always harboured a desire to run her own business.

She said: “It’s something I have always wanted to do. I worked for many years in school catering with a man called Clive Smith and we’d talked of running a business together. We looked at various pubs, restaurants and cafes around North Wales.

“Sadly, before we could set up a business, Clive was diagnosed with terminal cancer and quite quickly passed away.

“I promised him before he died I would carry on with the plan to start a catering business of my own.

“Then Matt, asked me to make some cakes suitable for vegans that he could take to his office in Chester where he works. People tried them without knowing they were for vegans and loved them so I thought this is what I’ll try and do as a business.

“My middle son, Jonny, 27, who lives in Staines with his wife Sophie, designed my website and customers are placing orders quite regularly online and I also have customers who have simply heard about me by word of mouth.”

One of her customers is Chris Spray, the proprietor of The Boathouse at Chirk, who lives in Chester.

He said: “We sample locally produced food as often as we can and I’m delighted to say we have a growing reputation when it comes to the vegan and vegetarian friendly food on our menu.

“However, we won’t buy a product just because it’s for vegans, it has to taste good and we want the best products made from the best ingredients.

“We only want top quality homemade food and Rachel’s Vegan Cakes certainly tick all the boxes.

"Veganism is growing and Rachel has launched her business at just the right time.”

Llangollen Food Festival committee member Phil Davies said: "We will be celebrating our 20th anniversary this year and we wanted to celebrate by providing a shop window for new products as a way of giving something back.

"We're confident it's going to be one of the biggest and best events in our history. We'll have around 120 stallholders so there will be an abundance of fine food and drink to choose from."

* For more information about the festival go tot www.llangollenfoodfestival.com and to find out more about Rachel's Vegan Cakes please visit www.rachelsvegancakes.co.uk
Posted by llanblogger at 6:31 AM