First Welsh pumpkin carving contest to be staged in Llan 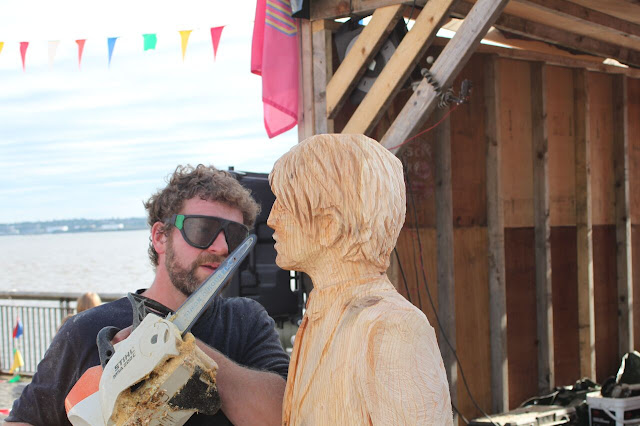 * Simon O’Rourke works on a replica of John Lennon at Liverpool’s Pier Head as part of his Beatles tableau in wood.

A man who tours the world using a chainsaw to create stunning sculptures is masterminding the first ever Welsh pumpkin championship.

Simon O’Rourke has carved out an international reputation for himself by turning out a series of wooden masterpieces depicting everything from a life-sized horse to an awe-inspiring tableau of The Beatles.

At Llangollen Food Festival, which is celebrating its 20th anniversary on Saturday and Sunday October 14 and 15, he’ll be presiding over the inaugural Wales-wide competition to fashion spooky Halloween faces from a pumpkin.

After gaining his honours degree, 39-year-old Simon became a tree surgeon simply because he needed a full-time job while establishing his career as an illustrator of children’s books.

He eventually switched to wood carving when he realised how creative he could be with a chainsaw.

He produces fine pieces of artwork using waste timber or standing stumps using a variety of power and hand tools. These range from classical sculpture of human and animal forms to abstract work and re-creating logos in wood.

Simon’s carving exploits have taken him across the globe to compete in competitions in the USA, Japan, Canada, Holland, Germany, Denmark and the UK.

His recent triumphs in timber have included a life-size replica of a horse which later galloped off on a countrywide tour and a full-sized tableau of The Beatles which he sculpted within 24 hours for a display at Liverpool’s Pier Head over the August bank holiday weekend.

One of his personal favourites of the past few years is the Alice in Wonderland scene he created for a restaurant in Bristol, featuring Alice herself, the Queen of Hearts, the Mad Hatter and the March Hare.

Simon, from Rossett, near Wrexham, said: “I’ll be appearing at Llangollen Food Festival in the run-up to Halloween so I thought it would be the perfect opportunity to stage the first ever Welsh Pumpkin Carving Championships.

“Wielding a chainsaw to fashion their traditional jack-o-lanterns or skulls might be asking a little too much of competitors so the tools they’ll be using tools are going to be a bit less demanding.

“Before the championships take place I’ll be giving competitors plenty of hints and tips at my pumpkin carving workshops and showing them how to work with the three or four types of tools I’ll be lending them.

“They’ll be ribbon loop tools which are normally used in clay sculpting. They’re very effective but also safe to handle.

“The competitors can work in whatever way they choose but I’ll be showing them how to sculpt the flesh of the pumpkin rather than simply plunging through the surface with a knife.

“They can do the very traditional jack-o-lantern design but I’ll demonstrate a couple more ways to do it.

“Pumpkins are nice and soft to cut and are readily available at this time of year. I’m hoping to see some really fantastic creations.

“We’re now on the lookout for suitable competitors to start gashing away at those gourds. It’s their big chance to carve out their own artistic reputation using a different type of medium.

“Entrants will pay £5 to take part and they get to take their carved creations home for Halloween. The star prize for the best piece of work will be a Halloween Hamper filled with all kinds of goodies to the value of £25.”

Simon added: “It’ll be great to be back at Llangollen Food Festival, especially as this is the festival’s 20th anniversary and the inaugural pumpkin carving competition will help make it a landmark occasion in more ways than one.

“Last year I brought along a big wooden dragon called Hemlock I’d carved which has a moving neck and he’ll be coming along with me again this year for people to have their pictures taken alongside.

“Llangollen Food Festival is now one of the UK’s most top food festivals and I’m very much looking forward to going back there.

“It’s a great opportunity for people to sample local produce they wouldn’t normally get to try.
“North Wales has such a rich variety of locally-sourced food and drink and the festival does a fantastic job showcasing it.”

Phil Davies, a member of the committee at Llangollen Food Festival, said: “Llangollen is now recognised as one of the country’s foremost food festivals and we can’t think of a better way to mark our 20th anniversary than hosting the very first Welsh Pumpkin Carving Championships.

“Simon, who we are delighted to welcome back to Llangollen, came up with the idea and we were delighted to help him make all the arrangements for what promises to be a challenging and very entertaining feature of the weekend.

"This year is going to be a very special as the festival is celebrating its 20the anniversary and with a record number of around 120 stall-holders promises to be the biggest and best yet. I can't wait."

* To find out more about Llangollen Food Festival and the Welsh Pumpkin Carving Championships go to www.llangollenfoodfestival.com

Posted by llanblogger at 7:56 AM