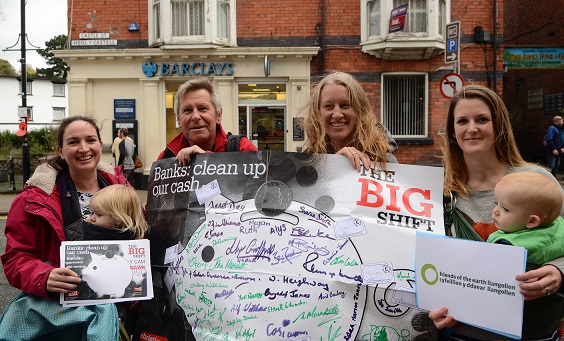 * Friends of the Earth campaigners outside Barclays bank in Castle Street.

Members of Friends of the Earth Llangollen visited Barclays Bank this week as part of their campaign against fossil fuels.


According to FoE, Christian Aid has revealed the high street banks are still using savers’ money to support fossil fuel companies, even though governments, scientists and even the banks themselves are in agreement that the country needs to move away from coal, oil and gas to protect our planet.

The Llangollen-based group presented messages from the community explaining why the bank needs to move from fossil fuels to renewable energy as part of the Christian Aid’s Big Shift Campaign.

Group spokeswoman Kay Polley said: "The banks have already agreed to take action on climate change, but they are still financing coal mining and oil companies, and the most frustrating thing is that they are using customers’ money to do this.

"Barclays is now the only bank in Llangollen, and it’s using our money to fund actions which are destroying the planet.  That must change."

The group presented a letter to the bank to be passed to the chief executive and showed off their piggy bank poster filled with messages of support for the bank to act.
Kay Polley added: "Climate change is the biggest issue humanity faces. We need everyone, including the people managing our money to make the right decisions to put us on a safer path towards a better future.

"Fossil fuels are increasingly a financial risk as well as fuelling climate change. As governments and markets around the world act to reduce carbon emissions, the value of fossil fuel companies could decrease rapidly.

"Christian Aid believes that with a shift in policies and investment decisions, the biggest high street banks could be providing the capital needed to invest in the energy systems we need for the future instead of damaging the planet."