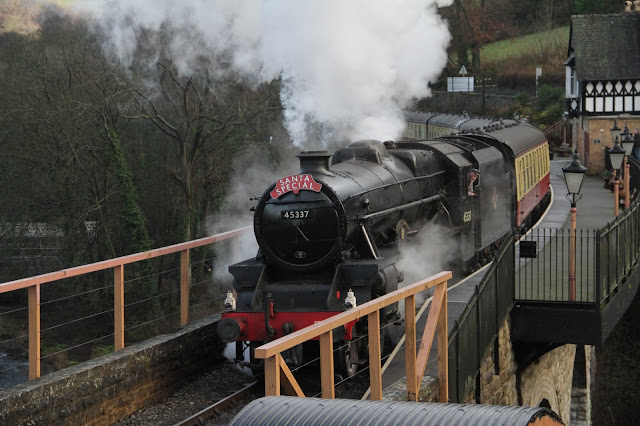 * A Santa Special train from Llangollen Station at Berwyn.

A new book by Simon Jenkins tells the history of Britain’s railways through its 100 best stations.

And an article about the book in the Guardian newspaper features 10 'gems' from grand old York to a Highland outpost.

Included in the list is Berwyn of which the article says: "The gorges of the upper Dee are among the most dramatic in Britain.

"Undaunted, the Llangollen & Corwen Railway, built by Great Western in 1865, wound its way from Llangollen into Snowdonia through a series of hair-raising bends, tunnels and bridges.

"The line closed in 1965, but was reopened by the dogged Llangollen Railway Society in 1981. It well illustrates the debt the Welsh tourist industry owes to Wales’s industrial past.

"Berwyn station, the first halt west from Llangollen, is perched precipitously on a platform between the Dee gorge and the A5.

"It was designed in the 1860s, probably by the doyen of Marches stations, Thomas Penson of Oswestry. The style is the same black-and-white Tudor he employed in rebuilding much of the city of Chester.

"The stationmaster’s house is of three lofty storeys, steeply gabled, with one gable looking out over the gorge.

"This is now available as a holiday let for those with a head for heights (sleeps six, from around £500 a week, one-week minimum, llangollen-railway.co.uk). To stand on the platform, with only the track between oneself and the cliff edge, is to see the upper Dee at its most Alpine."

* See the Guardian article at: https://amp.theguardian.com/travel/2017/oct/01/10-of-the-best-railway-stations-in-britain-uk-simon-jenkins