Autumn gala steams into the railway this weekend 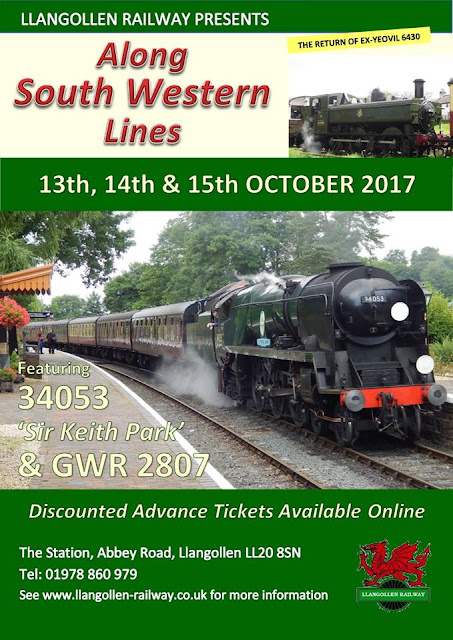 The Along South Western Lines Gala will be taking place over three days from Friday-Sunday October 13-15.

Featuring an intensive timetable, visiting locomotives and special attractions along the line, the railway says it has something for all railway enthusiasts and families alike.

With 2017 marking the 50th anniversary since the end of Steam on the Southern Region, this year’s event includes visiting historic steam locomotives from the old Southern Railway as well as the Great Western Railway.They are:

* No. 34053 “Sir Keith Park” – Southern Railways ‘Battle of Britain’, with thanks to Southern Locomotives Ltd and the Severn Valley Railway.

A selection of our home fleet will help deliver an intensive service for the gala.

Main highlights are due to include autotrains with GWR Pannier No.6430 and a demonstration of parcel loading at Berwyn.
Posted by llanblogger at 6:26 AM