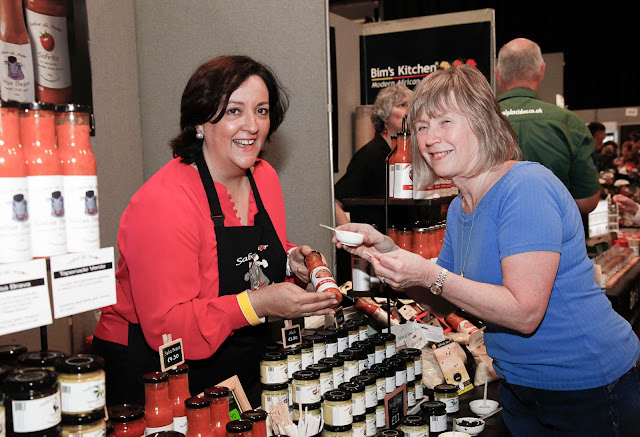 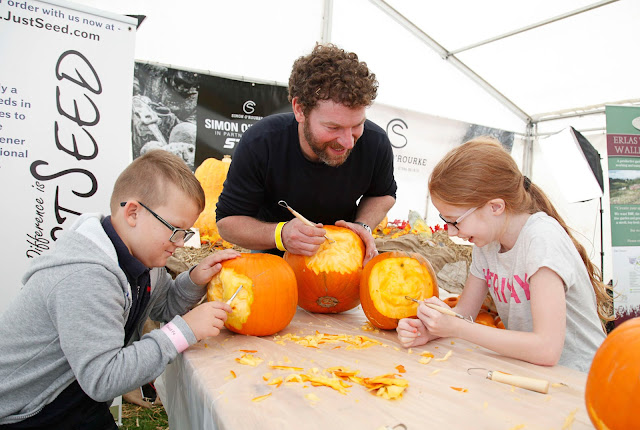 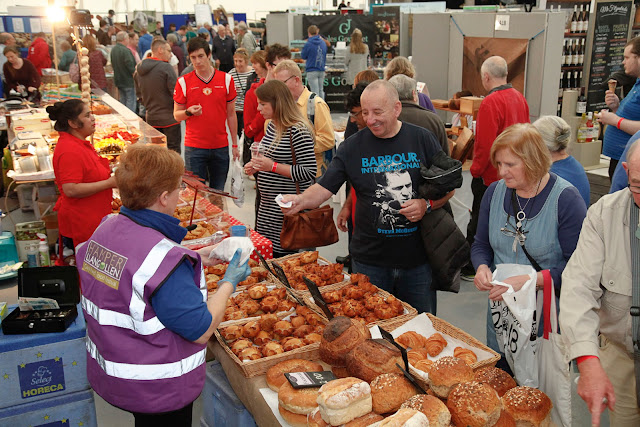 * Foodies crowd around the stalls at the festival. 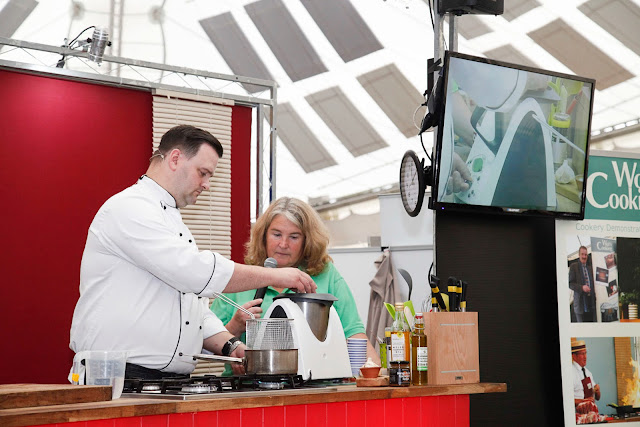 A cancer nurse was among the health service staff given free entry to one of the UK's top food festivals as a way of celebrating the event's 20th anniversary.

Ann Gostage was one of the thousands of foodies who flocked to the popular Llangollen Food Festival which provides an annual showcase for the region's best producers.

The 58 year old, who works as a specialist lung cancer nurse at Wrexham Maelor Hospital, was delighted by the generosity of the organisers towards the staff of Betsi Cadwaladr University Health Board.

Ann, who lives in Llangollen, said: “I was actually at the first food festival here 20 years ago and have seen it just grow in popularity ever since.

“I’ve enjoyed being here again today and it was good to see the extra stalls. I like to come early and get the pick of the produce and I’ve bought some nice chorizos, onion bargees and a bottle of gin.”

Another woman who remembered attending the very first festival in 1997 was the current Mayor of Llangollen, Cllr Sheenah Burrell, who was working in the local Tourist Information Centre at the time.

She recalled: “It was brilliant and showed of lots of quality local and Welsh produce.

“Right here on our own doorstep we were able to taste the kind of food we didn’t even know existed and over the past 20 years it’s just got better and better.”

She added: “It’s amazing how the festival has grown with more stands and more diverse kinds of food and drink.

“It attracts the best of the best producers and is an amazing showcase for what’s available not just from this area but the whole of North Wales.”

Organising committee member Pip Gale, who runs Gales Wine Bar in the town, said: “Visitors numbers are once again high and people are appreciating that the festival is bigger and better than ever.

“This year, by way of celebrating our 20th anniversary, we’ve added about 20 per cent more stands making a total of 130.

“They are both outside in front of the Pavilion and inside, with a performance area just off the main hall and, for the first time, upstairs too.

“We’ve also tried to present a much more varied mix of stands and activities, such as giving people the chance to try bread making and take part in wine tastings.

“As we mark our two decades we’re also celebrating being named as one of the Top 10 food festivals in the UK by the Independent and Daily Telegraph newspapers.”

It’s estimated that the two-day festival attracted around 8,000 food lovers from far and wide and pumped nearly £400,000 into the local economy, making a total of £8 million since it started.

Among the host of crowd-pullers this year were cooking displays from top chefs  Bryan Webb from the Michelin-starred Tyddyn Llan, former captain of the Wales Culinary team Graham Tinsley and the ever-popular Dai Chef who was there with his son, Daniel, the youngest head sommelier in the UK.

A special event to mark the festival’s closeness to Halloween was the staging of the inaugural Welsh Pumpkin Carving Championship masterminded by Simon O’Rourke who tours the world using a chainsaw to create stunning sculptures in wood.

Simon said: “It’s been going extremely well and we’ve attracted a large number of entrants all trying to come up with the most strikingly ghoulish face.

“The carvers, who have been bidding to win a £50 food hamper from the festival, have been enthusiastically cutting and scraping away and picking a winner is going to be so tough.”

Among those bidding for pumpkin perfection was six-year-old Gethin Jones from  Rhosllanerchrugog  near Wrexham who was there with his mum Gemma.

She said: “I’m a member of the forestry group at Ty Mawr so he’s used to doing things like whittling with wood but this is the first time he’s attempted carving a pumpkin. I think the championship is a fantastic idea.”

Taking a break from wielding his special cutting tool, Gethin said: “I’m having a great time and it’s good cutting into a pumpkin to make a face because it’s easier than working with wood.”

Rhian Owen from the Siwgr a Sbeis bakery – in English Sugar and Spice – in Llanrwst has taken a stall at the festival to show off her hand-made cakes and confectionery every year since 1997 and said she just had to be there to mark its 20th birthday.

She said: “The first one was quite a small affair and all the exhibitors were in just one area of the Pavilion but I’ve seen it go from strength to strength since then.

“It’s good for business and what I love about it is the lovely friendly atmosphere you always get.

“People come every year specially to buy my Christmas puddings and it’s been the same this time. I’m going to keep coming back because I just couldn’t miss it.”

Another Hamper regular is Roy Broadhurst who has been bringing his mobile coffee shop Caffeine Rush over from his base in Ysceifiog, Flintshire for the past 15 years.

He said: “I keep coming back because it’s good and local and I’ve got to know many of the other stallholders here. It’s never all that expensive to take space and my customers know I’ll be here and come looking for me.”

Also visiting from Flintshire where his company, Precious Chocolate Ltd, is based in Connahs Quay was Carl Gillard who said: “This is the first time I’m exhibited here but it’s fantastic and I’m really enjoying the atmosphere and the business I’m doing. I’ll definitely be coming back next year.”

One of the food experts appearing in the popular performance area at the festival was Jack Hatley, resident chef at Gales Wine Bar in the town. He was giving a deft demonstration of knife skills which went down well with audience member Jan Osborne from Wrexham.

She said: “This is the second time I’ve been to Hamper Llangollen and I’m enjoying it very much. I’m an enthusiastic cook at home and it was very interesting to see some of the latest equipment like the knives and how a real professional uses them.”

In the new hands-on performance area to the side of the main hall, a team from Coleg Cambria in Wrexham was attracting lots of attention with its bread-making display.

Giving it a try themselves were 12-year-old Morgan Owen from Acrefair and his sister Carys, four.

Watching closely as they fashioned their own versions of bread rolls was college catering tutor Mark Robertson.

Praising Morgan’s creativity, he told him: “I think you and your sister are so good that you’re definitely future contestants on the Great British Bake Off.”

Also turning in some tasty-looking bread rolls was Barbara Bennett from Broughton in Flintshire and her friend Pat Buck from Wrexham.

Pat said: “We’ve had a lot of fun doing this and it’s been a great day out at the festival. There’s always so much to see here and it’s so easy to get to.”
Posted by llanblogger at 10:17 AM