A police boss has pledged to work tirelessly to ensure the Welsh language is given equal status in the North Wales force.

North Wales Police and Crime Commissioner spoke out after a police sergeant said some colleagues felt that speaking Welsh was a "nuisance" and might damage their careers.

The issue first surfaced in an article written by Sgt Bevan in the Police Federation newsletter, Our Voice. 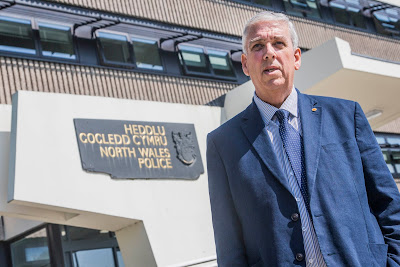 According to the commissioner (pictured), being able to speak Welsh in the workplace was a "fundamental and unequivocal right".

It was, he said, vitally important that speaking Welsh should not be seen as a barrier to getting promotion.

He revealed the force were planning a Welsh Language summit next Spring to address how it can, along with its partners, contribute towards meeting the Welsh Government’s target of increasing the number of Welsh speakers to one million.

"In addition to ensuring that my own office complies with the Welsh Language Standards my team and I work tirelessly to ensure that North Wales Police doesn’t treat the Welsh language any less favourably than the English.

"North Wales Police and I have a Joint Welsh Language Scheme and my team and I regularly scrutinise compliance with that Scheme.

"I am regularly discussing with the Chief Constable and the force, at one to one meetings and via North Wales Police’s Welsh Language Group, how we improve the service that North Wales Police can offer to Welsh language speakers and learners, both within our community and to the staff within the organisation.

"My colleague Dafydd Llywelyn. the Police and Crime Commissioner in Dyfed-Powys,  has written to the College of Policing to challenge them on the need not to treat the Welsh language less favourably in training and assessment and I fully support him in that challenge.

"As fluent first language Welsh speakers we are constantly aware and vigilant that the Welsh language is not treated less favourably.

"As well as being enshrined in law and the new Welsh Language Standards, the opportunity to speak your language of choice within your local community and workplace must surely be seen as a fundamental and unequivocal right.

"Welsh is not just a language – it is part of our local heritage and culture, and is engrained within our everyday lives.

"It is vitally important, not to mention morally correct and the right thing to do, that North Wales Police holds Welsh in equal status to English.

"I am confident, that this message is constantly reiterated by chief officers to all staff within North Wales Police.

"My team and I constantly scrutinise how North Wales Police works towards attracting more applications from Welsh speakers and learners from Welsh communities to join the police as officers or police staff. Part of this includes nurturing more contact with Welsh speakers and with representatives of Welsh language groups in our communities. A number of Welsh speaking police officers were appointed in South Gwynedd recently.

"I have also recently highlighted the importance of ensuring that North Wales Police’s internal HR proceedings and procedures fully acknowledge and consider ability in Welsh to be a skill, side by side with other necessary skills.

"I meet regularly with senior staff from North Wales Police to discuss how the Force complies with the Welsh Language Standards and my Deputy and I often ask staff when we’re out and about whether or not there are opportunities for them to use the Welsh Language in the workplace.

"I am assured that North Wales Police have done a whole range of things over the years to ensure that it continues to improve its provision of services in Welsh, and to make sure that Welsh is more visible and audible in the workplace.

"These include a significant training programme to ensure that all staff are able to provide linguistic courtesy to each other as well as to the public; advanced courses to support staff in moving towards fluency; initiatives including “Paned a Sgwrs” sessions and the Welsh Language Walking Club; as well as ensuring all signage and key messages are bilingual and that staff display their level of Welsh ability outside their stations, offices and on email signatures.

"A seminar was also held for North Wales Police’s Welsh Language Champions recently in order to re-establish that network.

"Of course, there may be occasions, when North Wales Police do not get everything right as an organisation, but I do believe that the Chief Officers always strive to do so, and to learn from any mistakes if they get things wrong.

"The Assistant Chief Constable recently emailed all staff to emphasise that any member of staff is welcome to use Welsh as part of promotion/selection processes held by North Wales Police.

"The Welsh language shouldn’t be a barrier to progress in the Force. The National Police Promotion Framework (NPPF) has been translated into Welsh, and I would encourage anybody to engage with this process through the medium of Welsh if they wish to do so.

"I would also encourage officers and staff to engage in any selection process within the organisation through the medium of Welsh if this is their preference. Clearly preferences amongst Welsh speakers vary between written and spoken Welsh and any combination is acceptable and encouraged.

"I am fully aware that the Chief Officers are keen to continue to expand on the good progress already achieved, and as such, I would urge fluent Welsh speakers within the organisation to encourage and support learners to ensure that everyone feels comfortable in the workplace and is free to express themselves in their language of choice.

"Also, it is important, that any member of staff lets the force’s Welsh Language Department or the Chief Officers know if they have encountered any problems in any dealings in Welsh in the Force, if they feel they are not being supported sufficiently.

"North Wales Police has made very significant strides over many years in respect of the Welsh language, they are seen to be a Force which takes this very seriously, and are passionate about ensuring a bilingual environment.  The organisation continues to offer excellent services in Welsh and English."
Posted by llanblogger at 6:31 AM