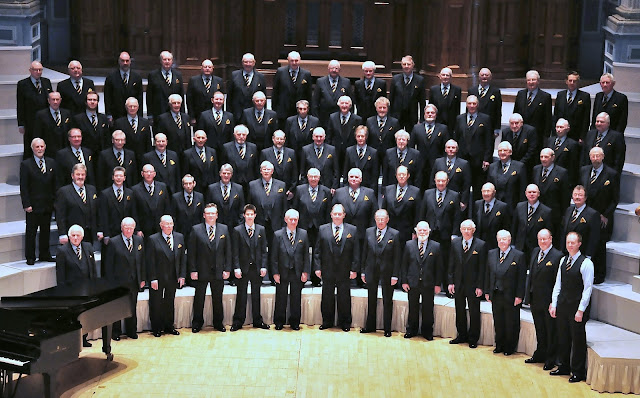 A male voice choir that performed at the first ever Llangollen International Eisteddfod in 1947 will sing alongside two of Wales’ most prolific male voice choirs at the event’s 70th anniversary opening concert on Monday July 3.

Including operatic choruses, classical favourites and some of Wales’ best known hymns, the show is jointly sponsored by Denbighshire County Council and Hamper Llangollen.

Fron Male Voice Choir, like the Eisteddfod, celebrates its 70th anniversary this year.

Formed in 1947, inspired by the inaugural International Eisteddfod, its history reflects that of the festival with many of its members coming together after returning from war.

Remarkably, two of its original members still sing with the choir.

Joining the Fron is Rhos Male Voice Choir, one of the most successful in Wales and 2015 winners of the male voice choir section at the International Eisteddfod.

The Rhos has also enjoyed a unique hat trick of wins when it took first place in the male voice choir competitions in The Llangollen Eisteddfod, the National Eisteddfod and S4C’s Côr Cymru in 2013.

Colne Valley was the first male voice choir to take the stage at the 1947 event and they remain one of the festival’s most prolific competitors.

Canoldir, a Birmingham-based male choir that was formed on St David’s Day in 1966 by a group of Welsh exiles and some English friends, completes the opening concert’s male voice line-up.

The impressive line up will perform under the baton of Owain Arwel Hughes who has conducted and recorded with many of the world’s leading orchestras.

Eilir Owen Griffiths, Music Director of the International Eisteddfod, said: “The line up for our Monday night opening concert is simply phenomenal and perfectly combines the Eisteddfod’s history and heritage with world class musical talent."

Bob Jaques, from the organising committee of concert co-sponsor Hamper Llangollen, said: “What a fitting start to the International Eisteddfod’s 70th Anniversary concert schedule. We are looking forward to an evening of rousing classical music and powerful Welsh hymns to get us in the mood for the rest of the week.”

* For more information or to purchase tickets for the 70th anniversary Llangollen International Musical Eisteddfod, including Llanfest, go to: www.Llangollen.net