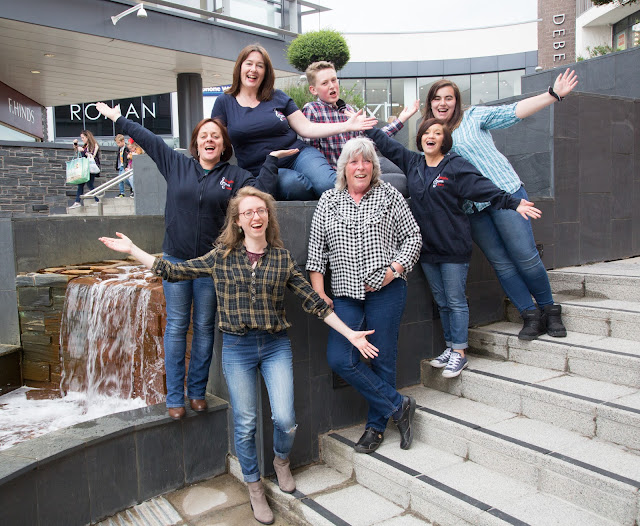 Shoppers were given a sneak preview of a blockbuster musical in Llangollen.

The music of country legend Dolly Parton had customers dancing and tapping their feet at the Eagles Meadow Shopping Centre in Wrexham.

They were entertained by member of the cast of the hit show, 9 to 5, which will be performed by Llangollen Operatic Society at the Town Hall between Tuesday, May 23, and Saturday, May 27.

The show, set in an office in early 1980s New York, charts the journey of three downtrodden women who are brought together in unlikely friendship by their mutual frustration with their "sexist, egotistical, lying, hypocritical bigot" of a boss.

The score is signature Dolly Parton and includes catchy songs with a country and western feel, a couple of big belters and some more poignant numbers.

This is perfectly complimented by Patricia Resnick's witty book, which will certainly have audiences chuckling all the way home.

All the cast members come from the Llangollen and Wrexham areas.

According to direct Robin Cowley, they've worked exceptionally hard learning the 20 iconic songs from the show.

He said: “It’s an amazing story and really good fun. It’s about stereo types, the CEO of the company is a misogynist, egotistical and hypocritical man. The story revolves around three women, Violet, Doralee and Judy and their desire to get even with their boss, overthrow him and lead the company they work for in a much better way.

“And of course they get their dream and introduce change including job share, flexi working and day care. It’s a fun story and a really lively show with a lot of laughs along the way.”

Robin, who trained as an actor at a London theatre school but now works as an insurance salesman, added: “We are delighted that the management of Eagles Meadow have yet again supported us as a society and allowed us time and space to give shoppers and visitors a little taster of the show.

“It’s a real help and we have had a great deal of interest from people keen to hear more about the show. It also gives the cast the chance to perform some of the dances and songs they will be performing on stage before big audiences.

“And during the show Dolly Parton does make an appearance, even if it is part of a projection. So we can rightly claim Dolly is coming to Llangollen!”

Helen Belton, who hails from Wrexham but now lives in Llangollen, plays Violet, one of the lead roles in 9 to 5.

She said: “There is a really good twist at the end of the story. It’s quite a complex story with so many songs and harmonies we have had to perfect. And my character is in all but two scenes so I’m on stage a great deal.

“I’m also enjoying working with Shea Ferron, who is just 14. He plays my son, Josh, in the show. This will be his first show although he is moving up form Llangollen Operatic Society’s Young ’Un’s where he gained lots of experience.”

Helen who works as a private music teacher and community council clerk, added: “I’d encourage anyone who enjoys good music and theatre to get a ticket and come along and see the show.

“The cast involves people aged 14 to almost 60. We have put a great deal of work and effort into the show. Robin is a fantastic director and the fact he trained professionally to be an actor really shows.

“This is my third show with the Llangollen Operatic Society. I’ve previously played Yum Yum in the Mikado and Nettie Fowler in Carousel. I’ve also performed in several other productions with other companies.”

Shea Ferron, 14, a pupil of St Joseph’s School Wrexham, was thrilled to get the call and to have been cast in 9 to 5.

He said: “I really enjoy it. I’ve been in a number of productions with the Young ’Un’s, the youth arm of the society but this will be my debut with the full society. I’ve really enjoyed rehearsals and I’m just looking forward to getting on stage now.”

Eagles Meadow manager Kevin Critchley said: “We are always keen to help community initiatives and Llangollen Operatic Society have been at Eagles Meadow several times to promote their shows.

“It’s always good to give out shoppers and visitors something a little bit different as part of their shopping experience and there is no doubt the 9 to 5 numbers proved very popular. We wish the 9 to 5 cast every success with their new show which I ‘m sure will be a big hit.”

* For tickets to 9 to 5 call Ticket Line on 07814 959680 or visit the Ticket Line website at www.ticketsource.co.uk/llangollenoperaticsociety
Posted by llanblogger at 7:51 AM