David looks back at a dangerous age in new book 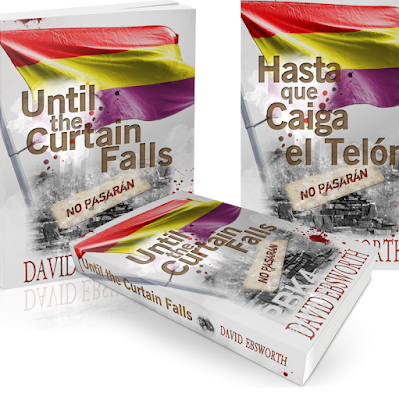 David Ebsworth has produced a new all-action novel which manages to deliver a fascinating history lesson into the bargain.
Despite the rising popularity of books with a military history theme, works about the Spanish Civil War of the late 1930s are still not all that common.


And consequently our knowledge of this episode of blood-letting which presaged the Second World War tends to be perhaps a little sparse.
But Until the Curtain Falls by Ebsworth, who already has a handful of historical fiction novels covering periods from the Dark Ages to the Zulu War to his credit, goes a long way to correct this imbalance.


While displaying all the nail-biting drama and plot twists of a classic spy or detective story, it also tells us much about the epic battle of fascism v socialism which is its backcloth.
The book is actually a sequel to the author’s earlier novel, The Assassin’s Mark, which placed left-wing journalist Jack Telford right in the heart of the conflict leading to the rise to power of the dictator Franco who went on to rule Spain with an iron hand until his death in 1975.
In the first novel Telford finds himself in plenty of trouble when a press facility trip to the war-torn country designed to show Franco’s Nationalists in the best possible light takes some seriously sinister turns.


Until the Curtain Falls, set in the closing stage of the war in the autumn of 1938,  takes the plot on from there and places Telford in some even more perilous predicaments.
But he’s no plastic James Bond figure and doesn’t always manage to escape unscathed. Although Telford must at times turn into a killer it’s a reluctant one and in one stomach-churning episode in which he is tortured by a fascist henchman he ends up with a life-changing injury.


The plot roars its way across a Spain where both the landscape and the people are  deeply scarred by civil war – always the most wounding of conflicts – and, thanks to some meticulous research, every step of the way the detail against which Ebsworth sets the action is little short of superb, right down to the correct-for-the-period price of the tickets when Telford spends a night at the theatre.
Every key character is magnificently drawn and the dialogue entirely believable.


The book pulls no punches either when it comes to its references to Britain’s less than glorious influence on the war which was a dress rehearsal for the much larger conflict destined to erupt in September 1939.
In every sense this book is a cracking read and also an absorbing backward glance at a very dangerous age.


* Until the Curtain Falls is published by Silverwood Books at £10.99. For more information, go to: http://www.davidebsworth.com/until-curtain-falls
Posted by llanblogger at 12:12 PM