Operatic gets its timing right with 9 to 5 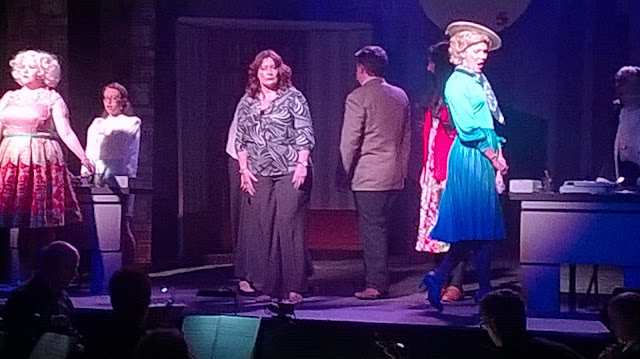 Llangollen Operatic Society has once again got their timing right with their latest production, the Dolly Parton-penned comedy musical 9 to 5.


Yesterday’s first night audience at the Town Hall lapped up every second of the show which tells the hilarious tale of how a bunch of office worms turn to eventually take over the running of their company – and would easily have come back for seconds.
It’s 1979 and the staff of US-based Consolidated Industries, especially the females amongst them, are being ground down by their chauvinistic boss, Franklin Hart Jnr - until inexperienced new employee Judy Burnley turns up.


Her arrival in the typing pool is the spark for revolution when she teams up with efficient manager Violet Newstead and the voluptuous Doralee Rhodes, the Dolly Parton character who everyone suspects of having an affair with Hart.
Their various strategies ultimately give the good guys control of the place – but only after a great number of laughs are generated.


A terrific trio has been cast to take on the three key roles of the piece which adds some very catchy tunes to dear Dolly’s original words that were filmed for the big screen back in the eighties.
The reserved but gutsy Judy is played to perfection by society stalwart Louisa Jones, while another Llangollen stage favourite Helen Belton shines as Violet. Rising star Louise Cielecki makes a bustling, brilliant Doralee.


Apart from fitting their characters like custom-made cowboy boots each of them can also belt out a mean tune of which there’s a fair spattering throughout the lively two-acter.
Relative newcomer Brett Jones is seedier than an explosion in a tomato canning factory as Hart and, as intended, has the audience hating him right from the start.


Backing up the leads is an impressive supporting team spearheaded by Tessa Orton Jones who stepped in at virtually the last minute to take on the role of Roz Keith, who’d do anything to please the awful boss, after the lady with whom she was originally part-sharing, Justine Bradey, had an accident in rehearsals.
The script demands quite a bit of set-piece show dancing and singing. And that’s admirably provided by a strong ensemble cast.

Smooth musical backing was provided for all this by a six-piece band under the baton of musical director Elen Mair Roberts.


Settings are masterfully created by the back-stage crew and costumes, lighting and sound are up to the society’s usual high standard.
This is an inspired co-production by Alix Rawlinson and Robin Crowley which ranks as another hit for the talented Llangollen team.


To reflect the day’s dreadful news from Manchester, the show was prefaced by one minute’s silence.
9 to 5 is on again tonight (Wednesday) and also Thursday and Friday with two shows on Saturday. Tickets, I understand, are in high demand.
Posted by llanblogger at 7:04 AM