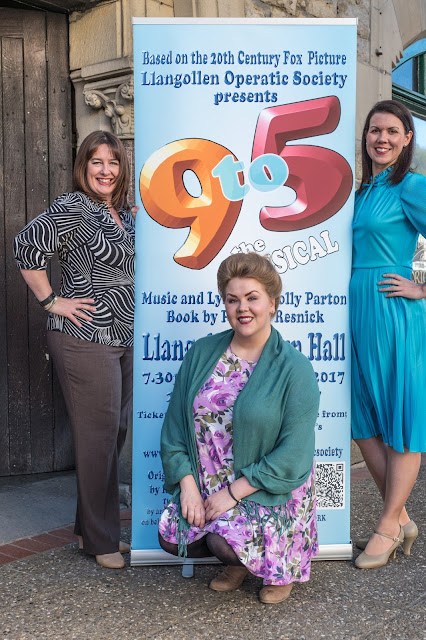 * From left, Helen Belton who plays Violet Newstead,
Louise Cielecki as Doralee Rhodes
and Louisa Jones as Judy Bernly in 9-5.

Members of Llangollen Operatic Society have been working 9 to 5 rehearsing for their forthcoming production of Dolly Parton's hit musical, based on the film of the same name.

The show, set in an office in early 1980s New York, charts the journey of three downtrodden women who are brought together in unlikely friendship by their mutual frustration with their "sexist, egotistical, lying, hypocritical bigot" of a boss.

The score is signature Dolly Parton and includes catchy songs with a country and western feel, a couple of big belters and some more poignant numbers.

This is perfectly complimented by Patricia Resnick's witty book, which will certainly have audiences chuckling all the way home.

Society spokesperson Louisa Jones said: "The cast and crew have put in an enormous amount of work over the past few months to produce a spectacle of the standard to which our audiences have become accustomed.

"Indeed, we are all thrilled to once again be up for three NODA nominations for last year's production of "The Producers" and this year's show already promises to be great."

9 to 5 - The Musical will be performed at Llangollen Town Hall from Tuesday 23rd to Saturday 27th May.

Doors open 7pm for a 7.30pm start and there will also be a matinee on the Saturday, starting at 2.30pm.

Tickets can be purchased online at www.ticketsource.co.uk/llangollenoperaticsociety or from Jade's Hair and Beauty, Gwyn Davies Butchers or Bailey's in Llangollen.