Police are advising owners of Land Rover Defenders to keep them secure after attempts were made to steal two during the past week.

The first attempt was made at an address in Towyn on Wednesday April 26. Another was taken from the Glascoed area, near St Asaph, later the same day. 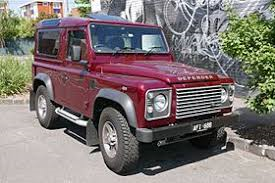 Four people were arrested as a result of these two incidents. They have all been released pending further enquiries.

David Williams, Designing Out Crime Officer for North Wales Police, said: “We are advising owners of these vehicles to be extra vigilant after several Land Rover Defenders have been stolen during the past year.

“We would urge people to fit an alarm with an immobiliser but also to use a mechanical device of some sort in a bid to dissuade any offender from even trying to hot-wire the ignition.”

He added: “These vehicles are very sought after, due to the fact that this popular model is no longer made. Unfortunately, as the demand for spare parts is only going to increase, owners of Land Rover Defenders should take all possible steps to prevent them being stolen.”

* Anyone who may have information relating to the thefts of the Land Rover Defenders is asked to call North Wales Police on 101.

Posted by llanblogger at 5:24 PM