A police boss is stepping up his campaign against modern slavery with the appointment of the UK's first support officer dedicated to helping victims.

Tackling the "insidious" issue has been made a priority by North Wales Police and Crime Commissioner Arfon Jones (pictured) and will be central to his new blueprint for policing the region. 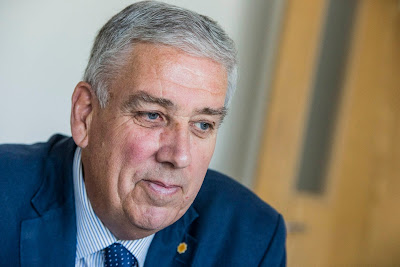 The post of Victim Support Officer is being funded by Mr Jones and the successful candidate will be based at the North Wales Victim Help Centre which is a one-stop-shop for victims of all crimes.

The centre covers the whole of North Wales and is based at divisional police HQ in St Asaph.

It brings together the support services of North Wales Police, the Witness Care Unit of the Crown Prosecution Service (CPS) and the former Victim Support organisation.
Each victim receives a response specifically tailored to their situation and the centre also employs specialists in mental health and hate crime.
The commissioner said: “Modern slavery and human trafficking are appalling and callous crimes which reach right into our society here in North Wales which is why I have made it one of my priorities in my Police and Crime Plan which sets the strategy for policing the area.

“It is vital to increase public awareness of one of the most insidious crimes faced by society and we are working hard with our partners to expose and tackle this crime, protect its victims and bring offenders to justice.

“To do this we need the communities of North Wales to support us, to look out for evidence of it and to contact the police if you have concerns.”

It was a view supported by Detective Inspector Gary Kelly, the North Wales Police's specialist on the scourge of modern slavery, who warned that modern slavery and human trafficking were a threat in the region.

According to DI Kelly, the force had safeguarded 60 persons from Modern Day Slavery and trafficking in the last 12 months.

He said: “It is a challenge. The victims can be affected by language barriers and by self-blame and are often people being held under duress or coerced

“It’s difficult to gain their trust because they often come from countries where police forces are corrupt or don’t operate at the level that the police do in the UK.

“The seriousness of the problem has been recognised in North Wales and in great part that is because of Arfon Jones and we are looking to appoint a victim support officer which would be unique and has never been done before.

“Dealing with modern slavery is a challenge but we are lucky to have a Police and Crime Commissioner and Police Executive who are passionate about it because this crime doesn’t always get that level of support and scrutiny elsewhere.

“We do have significant challenges ahead of us but we are heading in the right direction.
“Much of the problem is linked to the victim care issue because if you lose the victim then it significantly affects the investigation.”

He said that modern slavery and human trafficking in North Wales can be linked to Ireland but with North Wales as a thoroughfare, through the port of Holyhead, to the North West of England and a complicating factor was that many victims were being brought in and out of the area on a daily basis.

DI Kelly said: “You have to question whether people who drive into a car wash or visit a nail bar wonder how they can get full valet for £4.50 – the answer is pretty straightforward.

* North Wales Police has further information on its modern slavery website at www.north-wales.police.uk/advice-and-support/stay-safe/modern-slavery.aspx.

If you suspect slavery is happening near you please report it to police on 101, anonymously via Crimestoppers on 0800 555 111 or call the Modern Slavery Helpline on 0800 012 1700 or BAWSO on 08007318147. The victim help service is available from 8am-8pm Monday to Friday and 9am-5pm on Saturdays.
It can be contacted by Freephone on 0300 3030159, by email at: northwales.helpcentre@victimsupport.org.uk, or via the websites www.victimhelpcentrenorthwales.org.uk or www.canolfangymorthiddioddefwyrgogleddcymru.org.uk
Posted by llanblogger at 6:35 AM