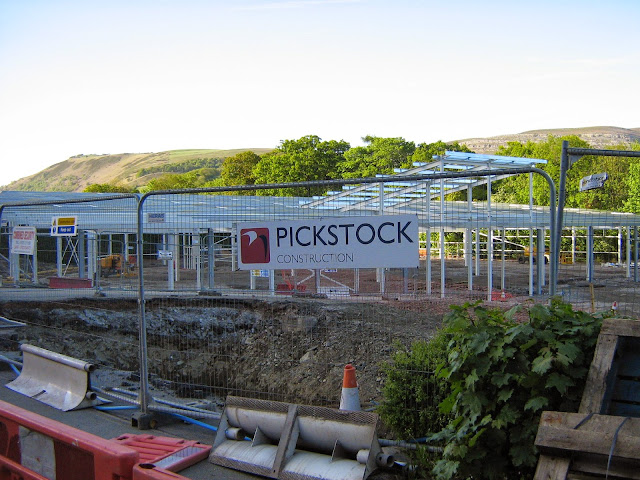 * Contractors started work only recently on the steel frame of the new store.

SAINSBURY’S have pulled out of plans to take over the supermarket now being built for them in Llangollen.
And the shock move leaves a question mark hanging over the 130 jobs promised by the development.

The store giant says it is now looking for another business to take over the 34,000 square foot building currently being built on the former Dobson & Crowther printworks site off the A5.


It was known as that as a result of tough trading conditions the store giant embarked on a review of planned new stores across the UK at the end of last year.
And this morning (Thursday) a Sainsbury’s spokesman confirmed they would be pulling out of the Llangollen development.


The spokesman said: “Following a review we have decided we will not be going ahead with the store on the site in Llangollen.
“We have not taken this decision lightly and are very disappointed we are not able to open a new shop in Llangollen.

“Since the proposals were first announced, shopping patterns have changed considerably and following a review, the scheme is no longer viable for us.


“There has been a fundamental shift in the retail market and in ways of shopping, such as convenience and online which means the scheme is no longer viable.
“It was a tough decision because we had worked really hard to get the support of the local community and to get their backing for the plan.”


The spokesman added: “J-Ross are developers on the scheme and we will be taking the building in August.
“We are now speaking to a range of different businesses to gauge interest and looking for someone to occupy the building.


“We want to make sure we get someone in there as quickly as possible and do it in a way that is complementary to the town.
“We are open to ideas.”


Stuart Davies, one of the town’s county councillors, said he had been given the bombshell news by Sainsbury’s official by telephone just before he headed off on holiday abroad early this morning.
Cllr Davies, who has been a keen supporter of the controversial development, said he was “saddened” by the announcement and hoped the new store, currently in the early stages of construction on the former Dobson & Crowther site off the A5, could still be taken over by another supermarket company such as Aldi or Lidl.


He added: “The news that Sainsbury’s won’t be coming after all is a real shock.
“The company did say recently that it would be reviewing its programme of store openings, including the one in Llangollen, due to difficult trading conditions.


“I was hopeful that this review would bear out the case for them coming here but now they have finally decided to pull out it is very saddening.
“Much will now have to be decided about the future of the building now going up on the old printworks site but I trust that it can still be used as supermarket, bringing much-needed jobs into the area.


“I will be asking our county economic development team to provide what assistance it can in ensuring Llangollen gets a new supermarket of some form.
“I don’t mind whether it ends up being Aldi or Lidl if they bring some jobs with them.”


The Sainsbury’s development on the old Dobson & Crowther site was part of a deal in which the print company was assisted to move to a new purpose-built factory just further along the A5 on former farmland at Cilmedw.
The firm took up occupation of its new headquarters last year and contractors moved in to clear its former site.


Work on the steel structure of the new supermarket has started in the past few weeks and the store was due to be trading by the end of the year.
The Sainsbury’s plan caused a welter of opposition from its announcement in 2012, which continued through its approval by the county council later that year and beyond.


Opponents, led by campaign group Keep Llangollen Special, argued that the town did not need such a large new food store and that it would badly damage the trade of small shops in the town.
They were particularly against the inclusion of a café in the development, which they claimed would have a ruinous effect on local food outlets.


Doubt was cast over the future of the development late last year after Sainsbury’s announced a half-year loss before tax of £290 million.
Like other large supermarkets they have been under pressure from the rise of discount chains like Aldi and Lidl.


Martin Crumpton, chair of Keep Llangollen Special, said: “This is a victory for common sense and persistence.


“KLS is thrilled an delighted and it’s cause for celebration from one end of the town to another.


“In terms of the site, we see this as a golden opportunity to bring in something like a technical park or warehousing that will bring in employment – skilled and semi-skilled jobs.”


Clwyd South AM Ken Skates said: “While I am disappointed that Sainsbury's has decided not to occupy the building, it will be completed and it will be occupied.
"This latest development offers us an opportunity to see an alternative retailer such as Aldi or Lidl come to Llangollen if that is what people want.
“We also have an opportunity to say what business use or type of retailer we’d like to see here, so I will be relaying the views of residents to Sainsbury’s as they look to sub-let this brand new building. I would ask my constituents to get in touch and tell me what they want.
“The key demand is that we continue to safeguard and create jobs in Llangollen, as well as build on the town's fantastic reputation.”

* An artist's impression of the completed Sainsbury's store.
Posted by llanblogger at 11:20 AM