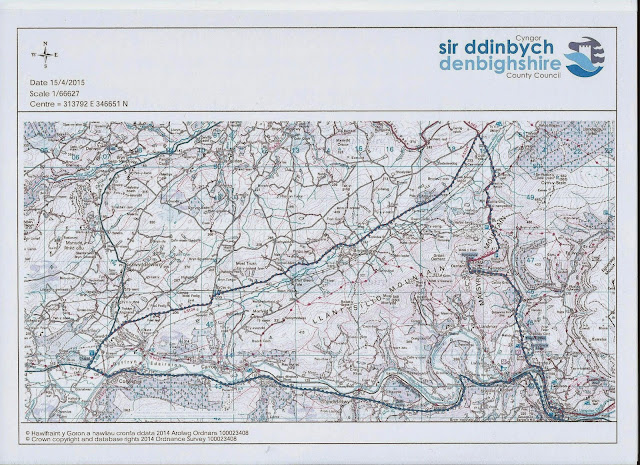 * A council map showing the closure and alternative route.

LLANGOLLEN county councillor Stuart Davies says he has “grave concerns” about the temporary closure of a stretch of the Horseshoe Pass just as the busy summer season begins.

Cllr Davies has learned that Denbighshire County Council recently made an order banning vehicles from using a length of the A542 pass – one of the main approach routes to the tourist town – between the Ty Cerrig/PIas Norway junction and the White Hart/Pentredwr junction to allow carriageway reconstruction and resurfacing work to go ahead.

The county council public notice detailing the order says it will come into force on June 8 and remain in place for 18 months or until the completion of the works, whichever is the earlier.

However, the county says it is anticipated that the works will take about five weeks to complete.

The altemative route available for traffic will be via the A542, A5104, A494, Castle Street, Abbey Road and A542 and will be signposted accordingly.

Pedestrian access will be maintained throughout the period of closure.

Cllr Davies said: “I have grave concerns about this closure leading up to one of the busiest times of the year for the town.

“It will mean people having to divert through Corwen adding six miles or so on to their journey.

“I will be getting in touch with officers to make sure that the works are done as quickly as possible and to ensure that the closure is kept to a minimum period of time.”
Posted by llanblogger at 6:59 AM