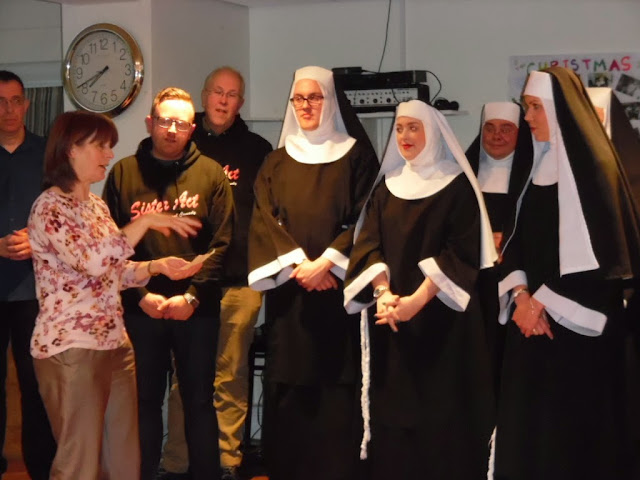 * Leonard Cheshire's Syliva Jones, left, explains to society
members how the money they raised from Sister Act will be used.

Society spokeswoman Louisa Jones said: "We sang a selection of songs from the show, lasting around 45 minutes.

"All those who had played nuns wore their habits to add to the effect and our audience all seemed to enjoy the performance.

"At the end, we presented Sylvia Jones, the volunteer coordinator and activities organiser, with a cheque for £882.
"This, together with a donation from HSBC, who very kindly matched the sponsorship raised by Elaine Ansloos, its manager in Chirk, came to £1,000.
"Sylvia thanked us for the donation and said the money would be used for residents' activities such as arts and crafts, IT, in-house entertainment and outings.
"It would also help to support two Japanese volunteers who stay with them for a year a time and do activities with the residents."
Louisa added: "It is a pleasure for our members to go and perform at the home following our production each year and we are always given such a warm reception.
"It really is a fantastic organisation and we are proud to have been able to raise funds on their behalf.
"The remainder of the money raised by the Nun Run, the charity event we did just before the show, will be used to cover Sister Act production costs and specifically, the costume spend, which was significant as all of the fantastic habits were made from scratch, by hand, by our very own costume team."
Posted by llanblogger at 6:10 AM