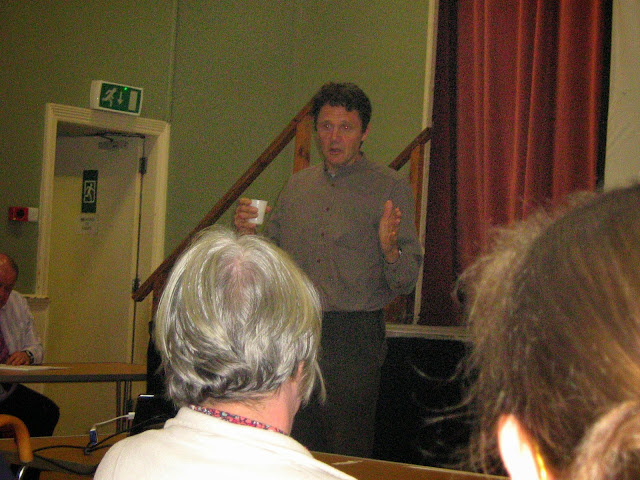 THE scrapping of traffic lights at the A5 junction, the creation of special zones to help slow down vehicles as they enter the town and flattening of kerbs on the bridge.

These were amongst the suggestions put forward by a visiting expert to ease traffic problems on Llangollen’s busy Castle Street at a public meeting last night (Tuesday).

Earlier this year the Cittaslow Llangollen group, which aims to improve local quality of life, ran a crowd funding scheme to collect enough money to get renowned traffic engineer Ben Hamilton-Baillie to take a look at the town’s main street and suggest solutions to deal with snarl-ups.

After spending the day analysing conditions in and around Castle Street he presented his findings to a meeting in the Town Hall.


Mr Hamilton-Baillie has an impressive track record of producing schemes to cure traffic headaches in towns across the UK and abroad, all based on balancing out the competing requirements of drivers and pedestrians.
He told an audience of about 60 people, including representatives of the town and county councils, that while he did not have any solutions he would offer a number of ideas to improve Castle Street which could form the basis of future discussion.


Explaining that many towns were now filled with “expensive kit” such as signs, signals and lights, to control traffic, Llangollen was “nowhere near as bad” as some other places.
He went on to give examples of schemes he had worked on, including London’s Exhibition Road and Poynton in Cheshire, where measures put in place to slow down traffic and create pedestrian areas even at once-busy junctions had been highly successful.


These had been based on introducing features such as paved areas which could be shared by vehicles and pedestrians.
Stressing that it was a “great mistake to treat drivers as idiots,” Mr Hamilton-Baillie that determining the safe speed at which vehicles could pass through a town centre was crucial to success and provided the basis for all other aspects of a scheme.


He also said that while red lights could be useful to stop traffic in some cases, he did not like to give motorists a green light, which suggested they were free to speed ahead when traffic lights change.
Giving instances of where lights had been removed completely making no difference to safety, he said: “I’m not sure the signals at the junction of the A5 and Castle Street are necessary. I would do something else.”


He also explained the importance of clearly defining the places where vehicles should change from highway driving to a much slower style.
In Llangollen, with its two main roads, he suggested the creation of paved areas in the road to highlight these spots – around the Sarah Ponsonby pub in Mill Street and in front of St John’s Church in Abbey Road on the A539/A542 and near the end of Brook Street and the junction of  Market Street on the A5.


Mr Hamilton-Baillie also suggested the creation of pedestrian areas in Queen Square and around Royal Gardens, site of the town’s war memorial, to help slow down traffic passing along Castle Street.
Another of his ideas to achieve the same aim was to flatten the kerbs on the bridge.


Other possibilities were the re-siting of pedestrian crossings in front of the Bridge End Hotel and close to Stan’s supermarket to more practical areas for pedestrians.
On the often thorny issue of parking along a stretch of Castle Street, he said it was “no bad thing” for traffic to have to pause as it passed the row of cars.


However, he said it would be more practical to have short blocks of parking rather than one long line as at present.
At the end of his hour-long presentation, which was followed by a question and answer session, Mr Hamilton-Baillie told the audience: “Llangollen is not in crisis but you need to have a clear vision of which way you want to go.”

Town councillor Phil Thane, who arranged the exercise, said Mr Hamilton-Baillie’s ideas would be discussed by the town council at its meeting this week and there could then be discussions between the authority and Denbighshire County Council.
Posted by llanblogger at 8:36 AM