Chain Bridge re-opens after over 30 years 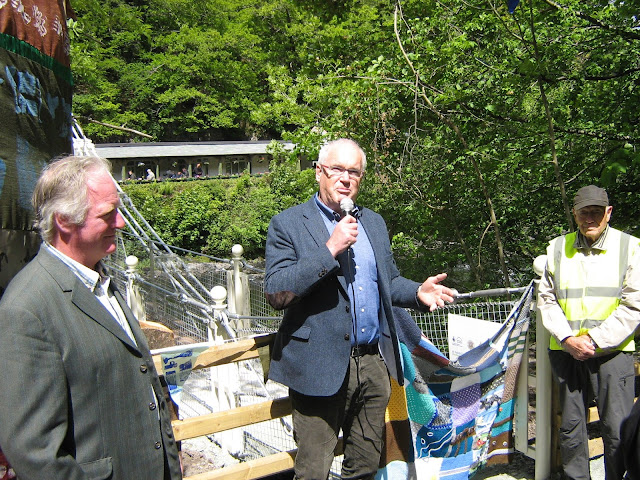 * Eddie Butler performs the official opening of the Chain Bridge. 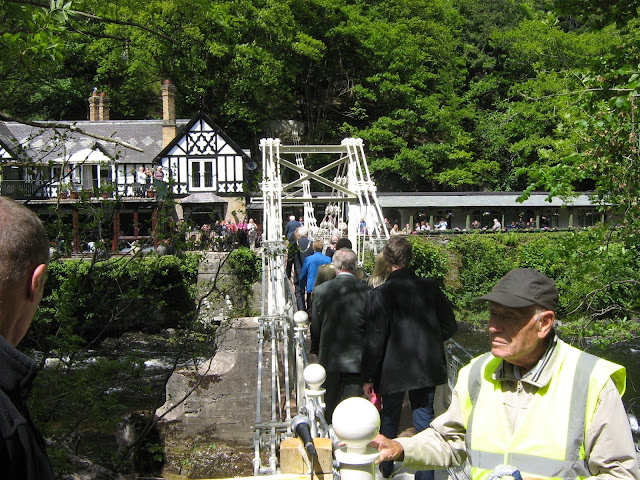 * The first 10 VIPs walk across the re-opened bridge. 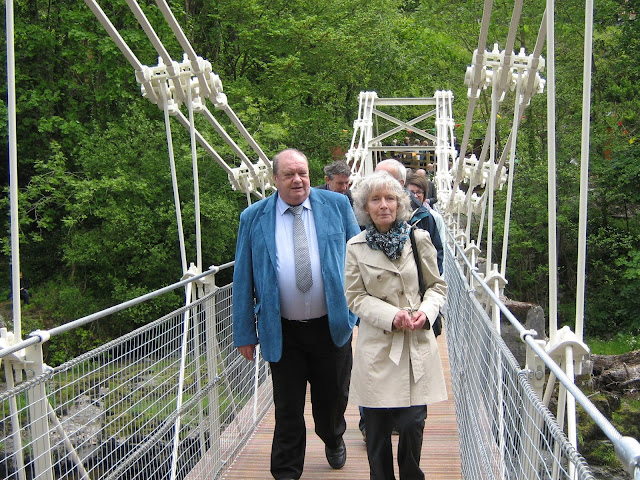 * Llangollen Town Clerk Gareth Thomas with Sandra Baker, clerk to Llantysilio Community Council, who were both closely
involved with the project, make the crossing. 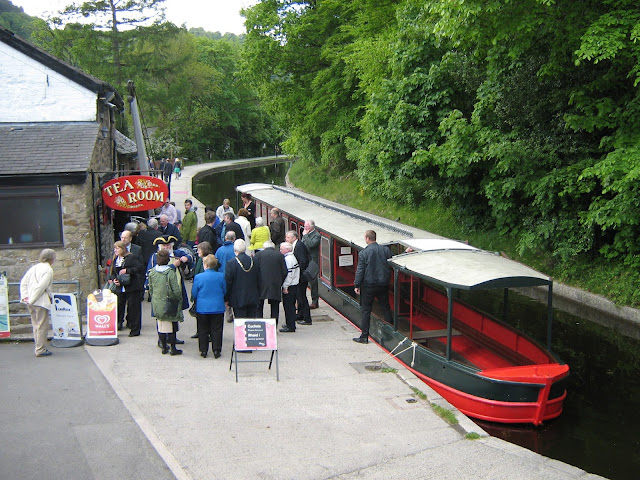 * VIPs disembark at Llangollen Wharf after their return boat trip along the canal.

LLANGOLLEN’S world famous Chain Bridge re-opened to the public today (Thursday) for the first time in over 30 years.

Eddie Butler, rugby commentator and presenter of the former BBC Wales series Hidden Histories, officially unveiled the iconic structure - thought to be the oldest chain link bridge in the world - following its recent £350,000 facelift, which took just over a year to complete.

VIPs arrived by steam train at Berwyn Station for the official opening ceremony at lunchtime and, after walking across the newly-opened bridge, travelled back to Llangollen Station by canal boat.

Among invited guests were John Pickering, a direct descendent of Exuperius Pickering who built the first bridge, and Sarah and Jamie Robertson, descendents of Henry and Sir Henry Robertson who built the second and third bridge.

Llangollen Town and Llantysilio Community Councils embarked on a painstaking project to restore the historic Chain Bridge about four years ago after buying it for just £1 after it had fallen into disrepair after years of neglect.

The project received a large grant from the Heritage Lottery Fund plus funding from WREN, which distributes funds donated by FCC to the Landfill Communities Fund, Denbighshire County Council, Cadwyn Clwyd and the Clwydian Range and Dee Valley Area of Outstanding Natural Beauty (AONB).

Acknowledged as a gem of the Dee Valley, the Chain Bridge was originally built in 1817 by local coal merchant Exuperius Pickering to open up a cheap transport route across the River Dee enabling him to transport coal to the A5.

It was later rebuilt by Henry Robertson in the 1870s and again by his son. Sir Henry Beyer Robertson, in 1928.

He rebuilt the suspension bridge which can be seen today, re-using the old chain links as suspension cables.

The bridge will now re-establish the strong link between Llangollen heritage railway and the canal, part of the Pontcysyllte World Heritage site.

Descendants of both Exuperius Pickering and Henry Robertson will attend the official re-opening along with the Deputy Minister for Culture, Sport and Tourism, Ken Skates AM, and Clwyd South MP Susan Elan Jones.

Ken Skates said: “The re-opened Chain Bridge will act as the perfect addition to the wide heritage offer in this beautiful part of Wales.

“It sits at the heart of a World Heritage Site and an Area of Outstanding Natural Beauty, making it a key part of the thriving tourism industry in the region.”


A distinctive engineering landmark, the bridge is of vital importance to the area’s industrial heritage and the re-opening has been welcomed by Nigel Clubb, chair of the Heritage Lottery Fund Committee for Wales, who said: “We’re thrilled to see this prominent feature from Llangollen’s past restored to its former glory and that National Lottery player’s money has played a part in this.

“I would like to congratulate the project team on their hard work on bringing the bridge back to life and look forward to seeing it thrive as an important local attraction once more.”

Samantha Jones, Chain Bridge heritage officer, said: “This has really been a labour of love for all involved and it’s so exciting to see all that hard work finally come to fruition. Communities in both Llangollen and Llantysilio have really come together to ensure that the bridge becomes an important transport link once more. We can’t wait for descendants of those who built the original bridges to mark the next chapter in the bridge’s history with us.”

“We’re delighted to have been able to support the restoration of the Chain Bridge and look forward to seeing the new bridge in use once more.”

* Stewarding duties for the occasion were performed by members of Llangollen's Tidy Town Team.

Posted by llanblogger at 3:59 PM