Davies hits out again over A5 roadworks 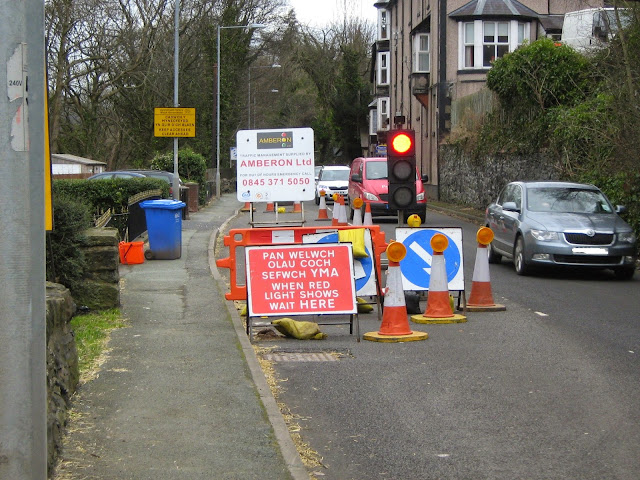 * The controversial A5 roadworks.

WITH revelations of an “unprecedented” number of calls about drivers rat-running through a residential area to avoid it, a councillor claims Llangollen people are being treated as “mushrooms” over controversial roadworks on the A5.


A lengthy section of the road was closed just before Christmas to allow investigations to go ahead into problems with the retaining wall opposite the Tyn y Wern hotel.
This has led to complaints about congestion caused by the long-phase lights controlling traffic flow through the works and a lack of information from the Welsh Government about how long they will last.
Now, Llangollen county councillor Stuart Davies has had information from a Denbighshire County Council official that shows a high volume of complaints about drivers going out of their way to avoid the blockage.
He said: “I have been told by an officer in our transport department that they are receiving an unprecedented number of complaints about the number of vehicles using Maesmawr Road as a way of avoiding the temporary traffic lights.

“The high number of vehicles using that road is creating a safety issue as it is predominantly residential in nature and is not designed to carry the level or class of vehicles now using it.
“I also understand that the traffic management arrangements are likely to be in situ for a sustained period of time
“Our transport team recently asked the Welsh Government if they have any time scale on the works and about any proposed remedial works.

“They also asked if a temporary prohibition of through traffic accept for access would be an option in the short term pending North Wales Police's approval.
“However, a reply from the Trunk Road Agency simply notes these comments and confirms they are dealing with the A5 retaining wall.”
He added: “I am disgusted with the reply, which is basically a cop out by the people in charge of this project. They are treating us like mushrooms.
“I have been fighting this battle now since last year.
“I have involved the Minister, Edwina Hart, through our local AM, Ken Skates.
“Residents are fed up, local members are fed up, there is the potential for children to be harmed and we are still being treated like mushrooms.
“There has been no news of what has been found, no news of resolutions, no news of time scales. What exactly is going on?
“MPs had a rude awakening last week. The Welsh Government needs to wake up and smell the coffee.”
Posted by llanblogger at 6:48 AM