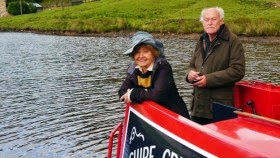 * Prunella Scales and husband Timothy West aboard their narrow boat during the recent TV series.

George Jones of Llangollen Railway says that an episode of a TV series featuring the town is to have a second showing later this month.


Actors Timothy West and his wife Prunella Scales recently hosted Channel 4’s Great Canal Journeys on which they embarked on four spectacular trips on waterways in Britain and France.
George says the third episode, which sees the couple journeying back to Llangollen where they spent their honeymoon and taking a trip on the railway, is to be shown again at 5.45pm on Saturday, September 27 on the channel More 4.


He added: “Those who watched it the first time round told us in the exhibition coach how nice it was and how it encouraged them to come to Llangollen.”
Posted by llanblogger at 11:35 AM