Choc and fudge sausages to premiere at food festival 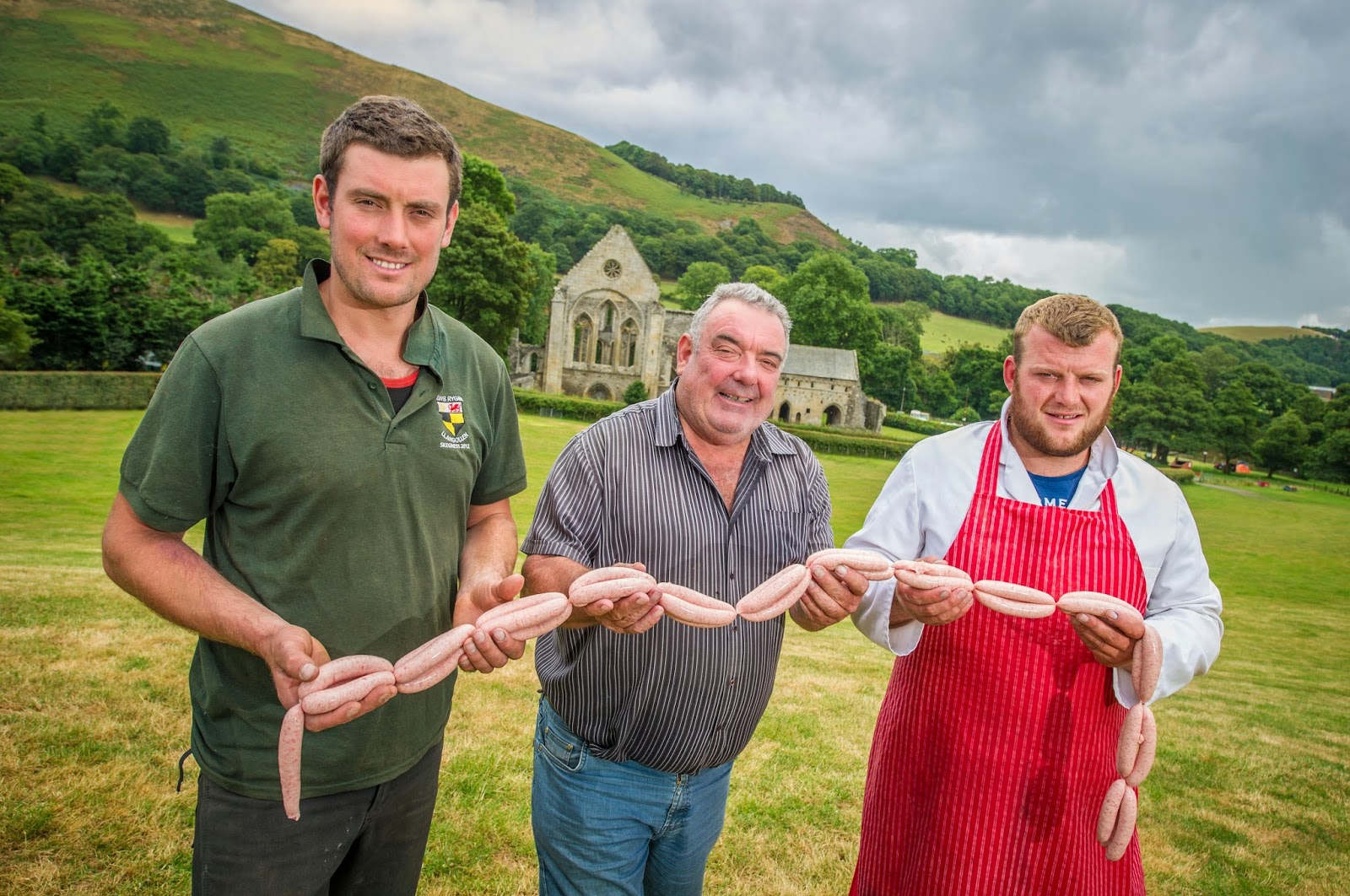 * Arran, his dad John and his older brother Jonathan with the sausages.
A new range of sausages made with chocolate and fudge will be launched a top food festival.
The special bangers are being developed by young farmer and trainee butcher Arran Davies and his butchery mentor Brin Kelly at Abbey Farm, just outside Llangollen.
Their meat counter at Abbey Farm Shop, which also supplies local hotels and restaurants, is just up the road from where the Hamper Llangollen food festival will be staged on Saturday and Sunday October 18-19.
Now recognised as one of the UK's top 10 food festivals, Hamper Llangollen is supported by rural development agency Cadwyn Clwyd.
Cadwyn Clwyd’s contribution comes via the Rural Development Fund for Wales 2007-2013, which is funded by the European Agricultural Fund for Rural Development (EAFRD) and the Welsh Government.
The event at the Royal Pavilion sees a wide range of food and drink exhibitors along with demonstrations by top chefs, plus a Rail and Ale evening excursion on board a steam train with Llangollen Railway.
Arran, 27, is the third generation to work on Abbey Farm, next to the historic Valle Crucis Abbey, which has been in the family since the 1930s.
The secret recipe for the sausages, which also use pork from pigs raised on the family farm, is still being tweaked, admitted Arran.
“It’s a recipe that Brin has previously made, though he used cocoa powder then. This time we are using chocolate chunks – there will be dark chocolate and milk chocolate versions, plus a fudge one, which we think caramelises the sausage as it cooks, so it’s a sweeter taste.
“Our customers at the farm shop are going to be asked to sample it over the coming weeks until we get the recipe just right,” said Arran.
“I am learning the ropes from Brin – he is a traditional butcher and I am like an old-style apprentice, learning at first hand-hand. I split my time between working in the Farm Shop with Brin and working on the farm with my older brother Jonathan, 30, and my dad John. My younger brother Billy, who is 23, also works on the farm, though he also does contract work elsewhere.
“I’ve been worked on the farm since I left school, like my dad, who worked with his dad,” added Arran, who admits that he prefers the more traditional style sausages he also makes for the farm shop.
Brin, from Penycae, used to run his own shop in Coedpoeth until he moved to take over at the Abbey Farm Shop butchery three years ago.
“I have previously made chocolate sausages and thought they would be ideal for our stand at Hamper Llangollen - in past years we discovered that visitors like to try something a bit exotic, something they can’t buy every day. These sausages will be savoury but with a sweet edge, especially the fudge ones.
“We will also be doing a pig roast at Hamper Llangollen, as pulled pork is so popular these days,” said Brin.
Arran’s dad John Davies is the one who helps select the porkers to be raised at the 500-acre Abbey Farm. He also rears beef cattle plus runs two caravan parks.
“I buy the pigs in as weaners to fatten up, I like a mix of traditional breeds such as Gloucester Old Spot, and the modern varieties, which are much leaner, and crossed with the Welsh White.
"One of my earliest memories of my dad is him cutting a slice of bacon from a flitch hanging down in the kitchen, to cook for his breakfast.
“He was a big Shire horse man, always preferred horses to tractors, and he won a lot of prizes with them. The stables, where he kept the horses, are where the Farm Shop, Tea Rooms and Bistro are now. I like to think he would have pleased to see what we have done with the farm, which he took on as a young man just after the depression.”
A quartet of Wales’s best chefs will have a starring role at the festival. Graham Tinsley, executive chef at Carden Park in Cheshire and Conwy’s Castle Hotel, will be cooking up a Welsh feast with Mike Evans, hospitality lecturer at Coleg Llandrillo, Rhos on Sea, and Dion Jones, one of Europe’s finest young chefs.
The ever popular Dai Chef, now the resident chef at Bodnant Welsh Food, the centre of excellence for Welsh food in the Conwy Valley will be there too.
Robert Didier, a baker who trained with culinary legend Raymond Blanc will also unveil the UK’s most expensive loaf – made with champagne and 24 carat gold, at the event.
Cadwyn Clwyd agri-food project officer Rob Price said: “Hamper Llangollen is a prime example of how Cadwyn Clwyd is helping to stimulate the local economy. The event will bring a large amount of people – and extra money - into the area, whether they are visiting for the day or staying the weekend
"There’s been a lot of interest in stands at the festival, both from established companies who have been many times before, and from new food and drink producers.
“There will be many new products on offer  -such as Arran and Brin’s chocolate and fudge sausages – as well as more traditional foods, so there will be something for everybody.”
More on Hamper Llangollen at www.llangollenfoodfestival.com.
Posted by llanblogger at 6:53 AM