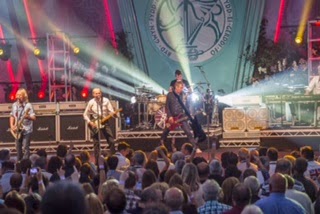 
Rock icons Status Quo had the Royal International Pavilion bouncing as they blasted through an all our yesterdays set of hits.
The Quo have been doing what they do best for nearly 50 years but a Llangollen  International Musical Eisteddfod audience isn’t their usual habitat.
True professionals that they are they took it all in their stride though and their pulling power had already been demonstrated months earlier when their closing night concert was sold out within days.
And they showed they can still riff with the best of them as they had the Pavilion audience on their feet and boogieing along to Rockin’ all Over the World, Get Down, Whatever You Want, Caroline and all the rest.
The Quo, who opened Live Aid back in 1985, were inspired to play the International Eisteddfod after a meeting with Jools Holland who played the closing concert last year.
Singer and guitarist Francis Rossi said: “Jools Holland told me he did the Eisteddfod this year and what a brilliant place and atmosphere it was. He also explained about the occasion and the event’s history. That got my attention.
“When we started out in the 60’s we used to look at anyone over 30 and think how they were dead old. But like everyone else we have changed and matured with age.”
So have their fans and the audience knew most of their songs by heart, and sang along and clapped and chanted through a splendid and stirring set.
Rossi formed The Scorpions, which became The Spectres, with fellow schoolboy Alan Lancaster way back in 1962 and they have played in excess of 6,500 live shows to a combined audience estimated to be well in excess of 25 million.
After a number of line-up changes they became The Status Quo in 1967, although they dropped The becoming simply Status Quo two years later.
And Quo they still were last night as they wowed yet another crowd and left them chanting for more.
It marked the end of another sun-drenched International Musical Eisteddfod which showed it has lost none of its colour and excitement with splendid crowds, intense competition and a glittering array of stars from Bryn Terfel to Caro Emerald to Status Quo.
Posted by llanblogger at 10:25 AM