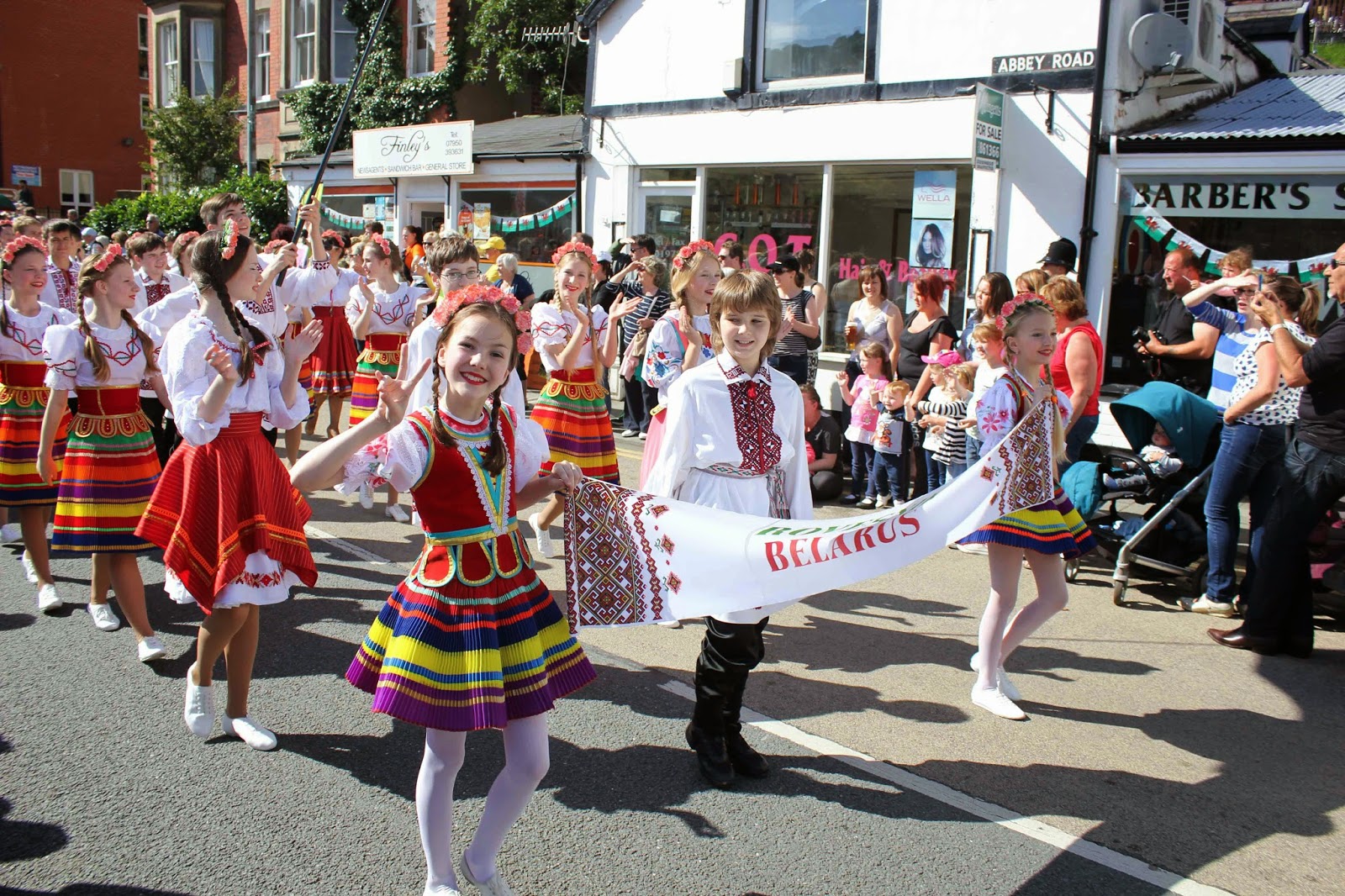 * A group from Belarus on the big opening day parade last Monday.

THIS year’s “sunshine eisteddfod” at Llangollen has been a big hit both artistically and as a crowd pleaser, says its delighted Music Director.
As temperatures soared throughout the week over 22,000 people from across the globe came flocking to the international musical festival to enjoy a packed programme of star-spangled evening concerts and top-class choral and dance competitions.
Music Director Eilir Owen Griffiths said the evening concerts, which ranged from a stunning performance of the Sondheim musical Sweeney Todd starring opera legend Bryn Terfel to a foot-stomping show by iconic rockers Status Quo, were among the best to be staged during his three years at the helm of the festival’s entertainments programme.
“Sweeney Todd, which was our eisteddfod opener on Monday, was quite an undertaking and meant pulling in all kinds of people to make it happen but everyone worked together fantastically well and I’m very pleased with how it went and was received by the audience,” he said.
“The Caro Emerald concert on Thursday evening was also something very special.
“She completely held the audience for the whole 90 minutes of her performance and then got people up on their feet singing and clapping along.
“As with everything during the week - concerts and competitions - the backstage crew did a remarkable job.
“Our volunteers make magic things happen.
“Noah Stewart, both during the evening concert on Wednesday and when he sang on Thursday as our day president, was magnificent.
“He embraced the eisteddfod and the eisteddfod embraced him because he shows so much enthusiasm and passion.”
Eilir said that another highlight of the evening concerts came on Friday when the eisteddfod production team worked with the Wales Millennium Centre, and the opera company Igugu Le Kapa and the Bloemfontein Male Voice Choir, both from South Africa, to present Spirit of Unity.
Eilir said: “The concert showed Llangollen’s spirit of international co-operation at its very best and we had South Africa side by side with Wales.
“It sent the audience away with smiles on their faces because they knew they had felt something at the concert.
“This series of concerts is the one of which I am most proud."
Eilir also had warm praise for the wide range of singing and dance competitions which ran throughout the week.
He said: “I was very impressed with the standard we saw being achieved in all the competitions and the children’s choirs in particular were just amazing.
“I believe that some of the younger ones were good enough to be in our Choir of the World Competition.
The problems faced this year by a number of overseas groups in obtaining visas to travel to the eisteddfod was highlighted a number of times during the week, first by eisteddfod president Terry Waite CBE and then by Wednesday’s day president The Rev Aneurin Owen, from Bro Aled, who said in his address that it can often be easier for soldiers of terror to travel around the world than it is for eisteddfod competitors to obtain visas.
Eilir added: “We’ve been lucky that the sun’s been with us all the week and it’s definitely been the sunshine eisteddfod.
“This year we put extra effort into bringing the field alive, offering something for everyone in terms of entertainment and stalls."
Eisteddfod chairman Gethin Davies said: “It’s been a tremendous week, which has been helped by the perfect weather.
“The quality of the competitions has been quite outstanding and the evening concerts have been amazing. When it came to their variety they had something for everybody.
“It is difficult to imagine that another festival anywhere would be able to offer anything similar.
“It is indicative of Llangollen that one of our guest performers, the American opera star Noah Stewart, was absolutely bowled over by the friendliness and fun of the whole event as well as its high standards.”
Posted by llanblogger at 10:53 AM