Ceinwin's on a roll with her baking collection 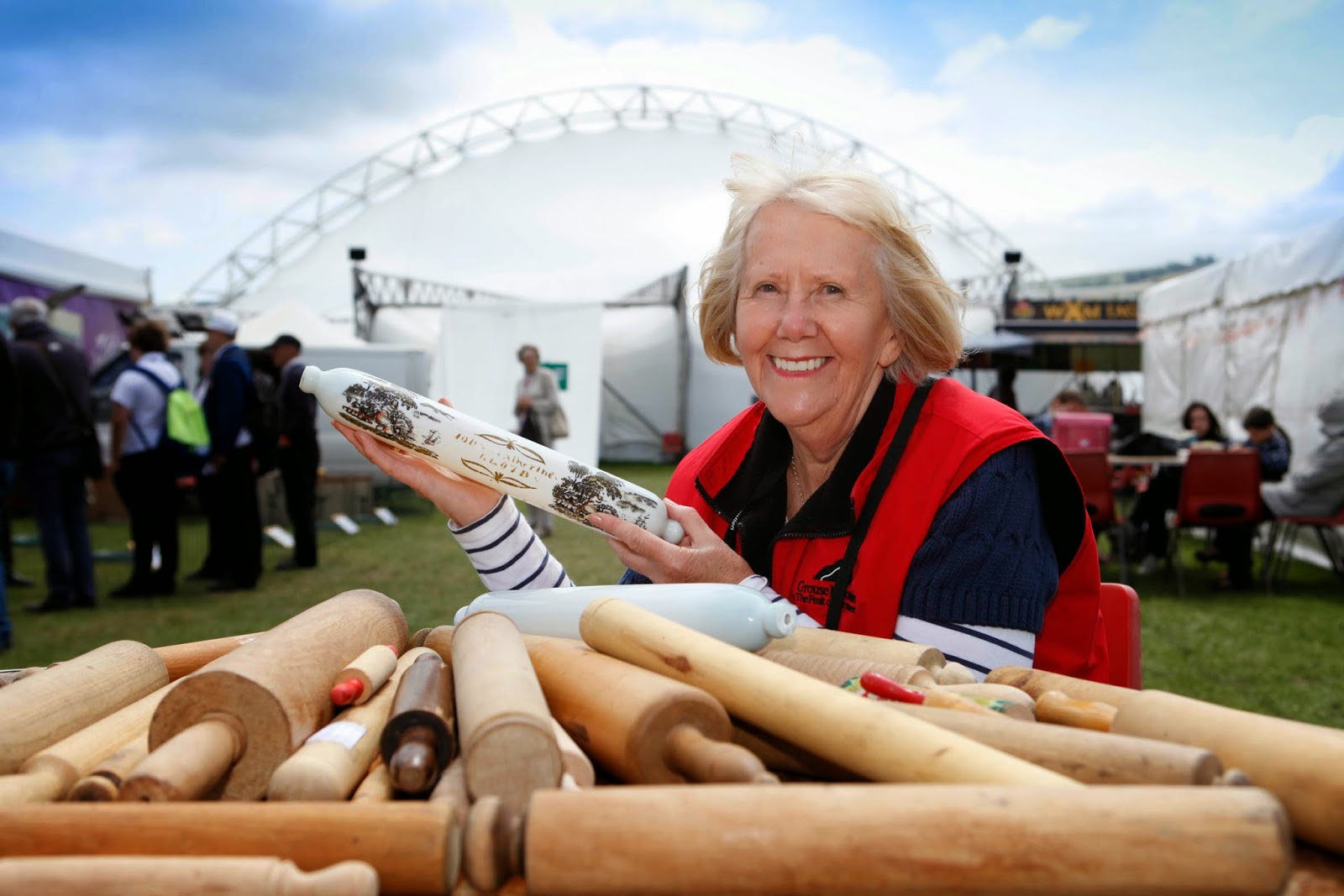 * Ceinwin on the eisteddfod field with her rolling pin collection.
YOU might say that for the past 30 years or more grandmother Ceinwen Clark has been on a roll when it comes to collecting.
For, when she’s not busy working as a volunteer with the floral committee at Llangollen International Musical Eisteddfod she’s out at antique fairs and car boot sales up and down the country indulging her passion for collecting rolling pins.
Over the decades she’s been building her amazing collection, which she keeps at her home in the Denbighshire tourist town, and she’s managed to gather together over 300 in a wide range of shapes, sizes and vintages.
And when her hobby came to the attention of producers of the musical Sweeney Todd: the Demon Barber of Fleet Street, starring Bryn Terfel, which kicked off this year’s Eisteddfod on Monday night, she was the obvious choice to supply a suitable rolling pin to Sian Cothi as a prop to make her role as Todd’s murderous pie-making assistant Mrs Lovett as authentic as possible.
Ceinwen, who has been a stalwart of the eisteddfod’s floral team for over 20 years, recalled that she began her long obsession with rolling pins about 30 years ago when she was visiting a coffee morning in Anglesey.
She said: “I saw a very big rolling pin on show which had a hook at one end. I asked what that was for and I was told that it was to hang it up in the kitchen.
“This particular one had come from one of the big country houses on the island and must have been used by the resident cook.
“As soon as I saw it I was hooked myself. I paid something like 50p for it and haven’t looked back since.
“I’ve now collected over 300 pins in all shapes, sizes and sorts.
“Most of them are made of wood and have got all different kinds of handles on them. There are also pins which are weighted with lead inside to give you a more even rolling action.
“I have some special ones that are made of ceramic. I believe these were brought back home from abroad by sailors. They have people’s names inscribed on them along with scenes of the South Seas and sailing ships. I think they must date back well over 100 years.
“I also have quite a few smaller pins, including one with my name on it which was specially made for me by the Eisteddfod’s life president Bob Attenborough who is a friend of myself and my husband Ronald. Ronald has also been a volunteer on the floral committee for the past five years.”
Ceinwen, who has two sons, three grandsons and a granddaughter, added: “I have a special pin for making waffles, which has the correct honeycomb pattern on it and another that is one-handed and made for disabled people to use.
“Our house is now getting pretty full of rolling pins and Ronald has told me we don’t want any more of them – but I’m not sure I can stop myself buying them.
“The word is also getting out about my collection. At one car boot sale I go to regularly they now call me Mrs Rolling Pin and when the Eisteddfod was looking for a pin for Mrs Lovett to use to make her pies on Sweeney Todd they came straight to me.
“I was glad to help but I thought I’d have a bit of a joke with it. The first one I offered Sian was very big and so heavy she could hardly lift it up.
“When she told me it was much too big, I brought out a tiny one which she said was too small. But all the time I had a medium pin hidden behind my back and when she saw that one she said it was just right.”
Ceinwen actually does do lots of baking, which means she regularly uses pieces from her vast collection.
“As we grow our own fruit at home I make lots pies from things like rhubarb, apples and raspberries,” she explained.
“My favourite pin to roll the pies is the one my mother had years ago but I do use other ones too because it would be a shame not to with so many at home!”
Ceinwen obviously has the collecting bug because, apart from the rolling pins, she has also amassed hoards of old fashioned flat irons, glass fishes, cobbler’s lasts, models of red double decker buses and, perhaps most unusual of all, glass eyewash vessels.
Posted by llanblogger at 6:46 AM