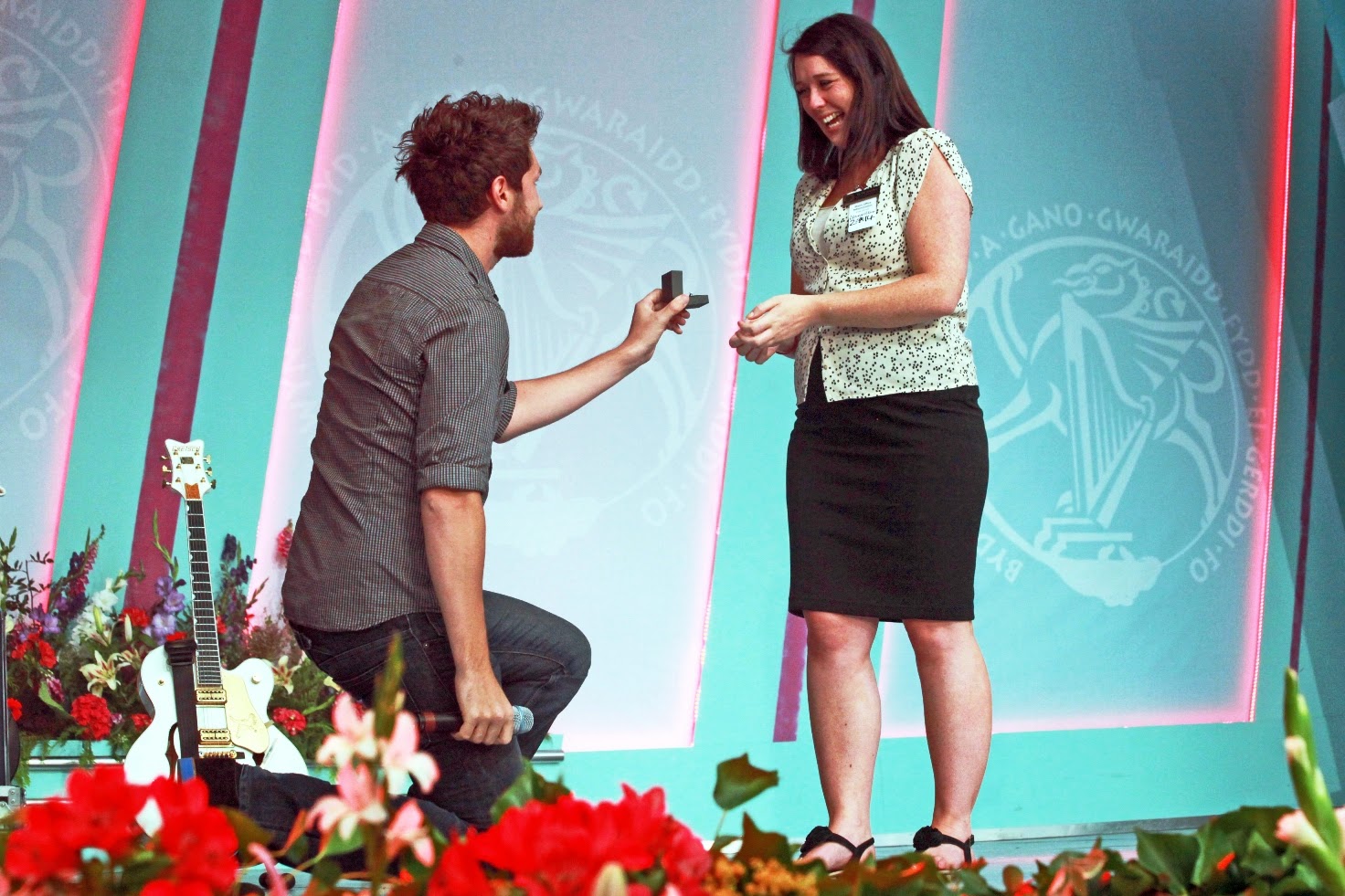 
A YOUNG Wrexham man perfectly captured the harmonious atmosphere of the occasion by proposing to his girlfriend before Thursday night’s Caro Emerald concert at Llangollen International Eisteddfod.
As an audience of thousands looked on, 28-year-old David Jackson, of Ruabon, went up on stage and down on one knee to romantically pop the question to Elise Davies, 26, who works full-time as an event co-ordinator for the festival.
When a shocked Elise, who had been carefully kept completely in the dark about the impending proposal, recovered enough to say “yes” the delighted crowd erupted in cheers and applause.
Elise, who lives in Ruabon with her future husband, said: “I had no idea David was going to ask me to marry him, especially in such a public place.
“I was absolutely gobsmacked when he did it and couldn’t speak for a few seconds but then I said yes because the whole thing was so romantic.”
The couple first met when they were both pupils at Ysgol Ruabon and eventually started dating.
They have been together for the past seven years and are expecting their first baby in November.
Elise, who has worked at the eisteddfod’s headquarters in Llangollen Pavilion for the past three years, said that although she knew David, who works as a graphic designer at a firm on Wrexham Industrial Estate, was going to the Caro Emerald concert with other members of the family, she didn’t have tickets herself until a few hours before.
“During the afternoon the eisteddfod’s musical director Eilir Owen Griffiths came into the office and gave some front row tickets to myself and my colleague, Sue McEvoy, which I thought was very nice of him,” she said.
“However, what I didn’t know was that he was actually in on the proposal thing and wanted me to have a seat from where I could easily get up on stage.
“Just before Caro Emerald was due to start the concert and when the place was absolutely full the presenter Sian Thomas said she had a special announcement to make.
“She asked David to come up on stage. I thought he was sitting in one of the rows behind me with his mum, Sue Jackson from Acrefair, and my mum Linda Davies, from Gyfelia near Bangor-on-Dee, but he appeared from behind the stage.
“He walked to the front and invited me to come up and join him. That was the first time I had any idea of what was going on.
“He gave a nice little speech about how much he loved me and then he popped the question.
“I said yes, of course, although it took me a few seconds to take in what was happening.
“The audience loved it and there was lots of clapping and cheering.”
Elise added: “I was absolutely gobsmacked about it all and I still can’t really believe it. In fact, it feels like it all happened to someone else.
“It was so romantic – but not really like David at all.
“But he later told me he’d actually been planning it all since last year’s eisteddfod when he was watching the Jools Holland concert.
“It was also so nice of him to propose at the eisteddfod because he knows Llangollen means so much to me.
“We haven’t named the day yet and probably won’t start planning the wedding until after our baby is born.
“I’d like to thank everyone at the eisteddfod who was involved in planning what was a fantastic moment for us.”
Posted by llanblogger at 7:27 AM