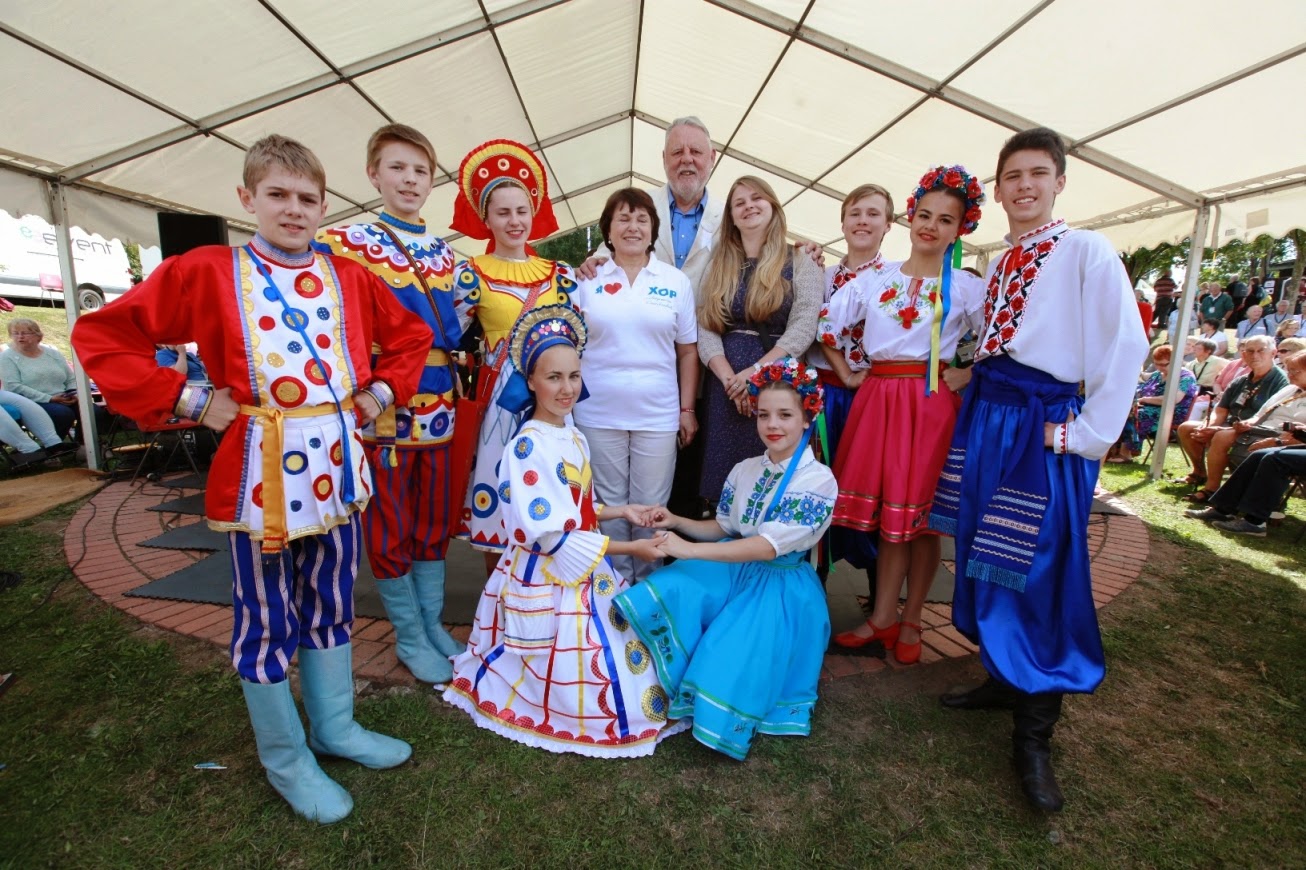 * Llangollen International Musical Eisteddfod President Terry Waite CBE
with Ludmila Stebenkova, left, chief conductor of the Krasnoyarsk City Children’s Choir, from Russia, and Oksana Cherkas, leader of the
Barvinochok Ukrainian Dancers.
PERFORMERS from the Ukraine and Russia put aside their countries’ political differences to unite in music today.
The symbolic meeting between a dance group from the Ukraine and a choir from Russia came this morning (Thursday) when they performed side by side at Llangollen International Musical Eisteddfod in which are both competing this week.
Eisteddfod President Terry Waite CBE, who greeted both groups of young people in their colourful national costumes, told them: “We know you have your problems at home but today you have come together in the spirit of music and dance. The future is in your hands.”
The historic meeting took place in the amphitheatre on the eisteddfod field and began with the 30-strong Barvinochok folk dance group from Kiev in the Ukraine going through an energetic routine.
Following them on stage were around the same number of young singers from the City Children’s Choir from the Siberian city of Krasnoyarsk who sang two powerful numbers.
At the end of their respective performances members of each group gave the other loud cheers and warm applause.
There were encores from the dancers and the singers at the request of Terry Waite and the delighted crowd who gathered to watch.
Oksana Cherkas, leader of Barvinochok Ukrainian dancers, said: “We are very happy to meet with the group from Russia today.
“Despite what is happening back home it is good that we can get together like this, enjoy each other’s performance and put politics on one side.”
Ludmila Stebenkova, chief conductor of the Krasnoyarsk City Children’s Choir, said: “It is good that we have been able to meet together in this way and come together as friends.
“This shows that music and dance comes before politics.”
Speaking through interpreters, Terry Waite told the two groups: “Today we have seen two peoples united through music.
“Over the years we have had many groups at Llangollen who have had their political differences but they have come together in performance, which is what the eisteddfod has always been about since it was first held in the aftermath of the Second World War.
“The future is in your hands and we hope that one day there will be more occasions such as the one we have seen today when you perform together in harmony and peace.”
Barvinochok from the Ukraine was founded in 1976 and today has over 500 children and young people aged from three to 23 in its ranks.
Dance styles the group specialises in include classical, traditional Ukrainian, modern and global culture.
Over the years, Barvinochok has received recognition and won awards at a host of international festivals and competitions in countries such as Russia, Hungary, Germany, Greece, France, Spain, Austria, Bulgaria, the Czech Republic, Portugal, Italy and Cuba.
Barvinochok’s first appearance at Llangollen came in 2009 when they won a certificate of merit for taking second place to a group from Slovakia in the choreographed folk dance competition.
Krasnoyarsk City Children’s Choir from Russia are making their Llangollen debut.
Founded in 1971 in the 1970s, the choir regularly tours the Russia, the Czech Republic, Mongolia, Georgia, Bulgaria, Romania and the Ukraine.
It has also visited the USA as part of a project called Friendship Ambassadors and co-operates with the Krasnoyarsk State Academic Symphony Orchestra.
Posted by llanblogger at 9:09 AM