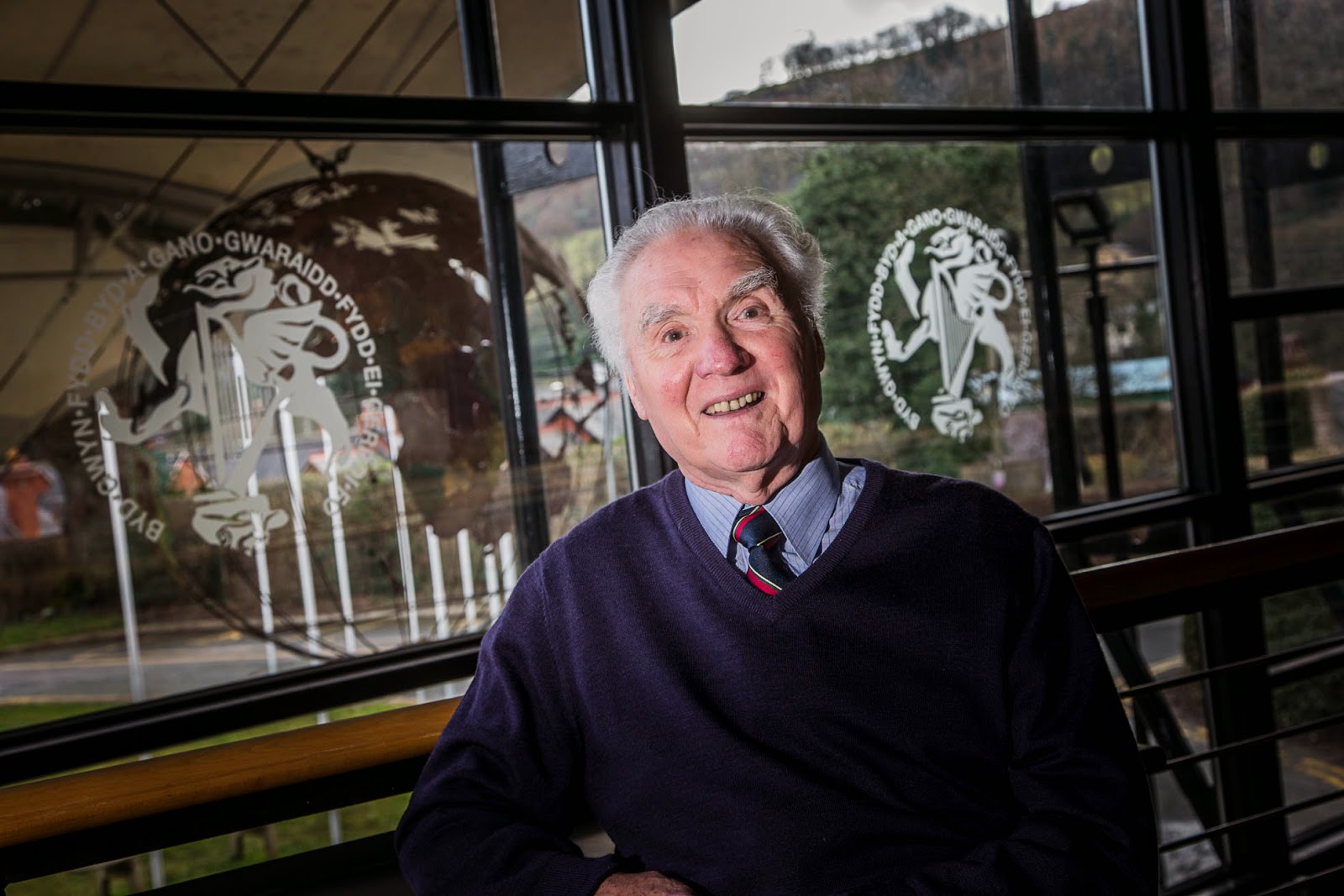 * Vincent Griffiths remembers turning down the chance to sing with Pavarotti.

A FOUNDER member of the world-famous Froncysyllte Male Voice Choir has been remembering the occasion almost 60 years ago when he turned down the chance to join legendary tenor Luciano Pavarotti in a sing-song around the family piano.

Vincent Griffiths, now a sprightly 82, was a young man in his early twenties when his late mother, Alice Griffiths, played host to Pavarotti and his father while they were competing at the Llangollen International Eisteddfod in 1955.

Mrs Griffiths opened her home in Beech House, Froncysyllte, to Luciano and Fernando Pavarotti for a week as the Chorus Rossini from Modena in northern Italy won the male choral competition.

Vincent, one of the first members of the Fron Choir and part of its line-up for 45 years, recalled: “My mother and father, Alice and William Griffiths, offered free board every year to people performing at the Eisteddfod. Over the years they had all nationalities there and enjoyed playing host to them.

“In 1955 Pavarotti, his father and two other members of their choir were staying at the house. I’d just been married to my wife, Nesta, and we were living in nearby Newbridge and I walked over one night to my mother’s in Fron to meet their guests.

“Of course, Pavarotti wasn’t famous then but he had a fine voice and was always singing.

“He was sitting at my mother’s piano. Neither he nor his father spoke English very well but when he heard I sang with a choir too Pavarotti invited me to join him in a song.

“I politely refused. Actually, I was due to compete against him when both our choirs were in the main choral competition that Saturday but that wasn’t why I turned him down.

“I was a bit shy and didn’t think my voice was very good, although I had been one of the first members of the Fron Choir from the age of 15.

“We went on talking about music for half an hour and I recall that both Pavarotti and his father were very nice chaps.”

Vincent, a retired lab worker at the Monsanto factory near his home has a son, Peter, who lives in Acrefair, two grand-daughters and three great-grandchildren.

He added: “In the main choral competition the Modena choir won the competition. Both the Pavarottis had very good voices but, to be honest, I think the best choir on the day was a group of Moravian teachers from Czechoslovakia.

“After that, of course, Pavarotti became very famous but he came back to sing as the star at the Llangollen eisteddfod 40 years later. He was staying with his father at the Bryn Howel Hotel and I took my mother, who died about 10 years ago at the age of 93, to see them.

“We didn’t have long to speak to Luciano but I think he remembered my mother. Fernando spoke to us for longer and put his arm around my mother. It was nice to have that reunion.

“On the Sunday night, when he sang at the closing concert of the eisteddfod, we had front row seats and it was a terrific performance.

“He was definitely the best tenor I have ever heard because of the clarity and power of his voice.

“With the Fron choir, which I left about 20 years ago, I sang second tenor and then first bass. I must have competed at Llangollen at least 30 times over the years from 1948 and it was always a highlight for us.”

In 1955 larger-than-life Pavarotti was a slim 19-year-old trainee teacher who had joined the choir because his father, a baker, was a stalwart member of the chorus.

The moment the Modena choir won the male choral competition and the visit to Llangollen left an indelible impression on him and he often spoke of it.

The experience also helped shape his destiny and he once famously said that if he could win the first prize with a small choir from Modena, he could do anything.

Four decades after the 1955 appearance Pavarotti would still enquire earnestly about the lady in whose home he had been a guest.

He once said of his time boarding with the Griffiths family in Fron: “I remember well the house I stayed in. All the way from Italy, I was exercising my English. But when we are brought to the house in Llangollen and meet the family, I understand not a word.

“I did not know there was such a language as Welsh. Even now I think how lucky they don’t write operas in such a language for me to sing. I would be out of work. It is impossible for us Italians to learn.”

Pavarotti said many times that he wanted to go back to Llangollen one day and that desire was fulfilled in 1995 when he made a triumphant return to headline at that year’s eisteddfod, marking the 40th anniversary of his first visit to north Wales.

He accepted an invitation to be President of the Day, on condition that his father could share the Day Presidency with him, so for the first and only time, the Eisteddfod had two joint Presidents of the Day.

On the Friday of the festival he fought his way to the stage through adoring crowds to tell a packed house: "Forty years ago, my God it seems to be just yesterday for me. I have done so many things.

“I always say that to the journalists when they ask me what is a day more memorable in my life, and I always say that it is when I won this competition because it was with all my friends. With me at that time there was a person that I would like to have the privilege to introduce: my Father.”

To much applause, Fernando Pavarotti walked on stage to join his son, and Pavarotti Jnr declared: "He is stronger than me he has a voice more brilliant than mine - at least that’s what he thinks

His father, who spoke no English, then came on stage and charmed the audience by putting his hands together and bowing to them with a beaming smile on his face.

Another giant of the world of opera, Wales’s own Bryn Terfel, will headline a spectacular curtain-raiser to this year’s International Musical Eisteddfod when he leads an all-Welsh cast, which also includes Wynne Evans, in a performance of Stephen Sondheim’s Broadway smash Sweeney Todd, the Demon Barber of Fleet Street on Monday, July 6.

It begins six tremendous days at Llangollen which kicks off on Tuesday with the Parade and a galaxy of international talent at the Carnival of Nations concert.

It will showcase spectacular circus acts from across the globe including Cirque du Soleil's Bruce Bilodeau, acrobats from the Chinese State Circus and Spellbound, winners of Britain's Got Talent.

The following night will see the return of Karl Jenkins, the highest selling classical composer alive today, with the world premiere of his latest masterpiece, Adiemus Colores.

The multi-award winning Dutch jazz singer Caro Emerald will be making her Llangollen debut on the Thursday evening.  Earlier this year her second studio album, The Shocking Miss Emerald, went to No 1 in the UK album chart.

Appearing with them will be Wales’ representative in Cardiff Singer of the World, Gary Griffiths, the Wales Millennium Centre Only Kidz Aloud Chorus under the baton of celebrity conductor Tim Rhys Evans and British Sinfonietta, one of the UK's leading independent professional orchestras.

The Choir of the World competition on the Saturday night is the blue riband event of the week-long festival and remains one of the foremost choral competitions in the international choral calendar.

Saturday will also feature a competition to find the dance champions of 2014 and to top the evening off Richard and Adam, who shot to fame on Britain’s Got Talent, will appear as special guests.

Bringing the house down on Sunday night will be legendary British rockers Status Quo who released the first of their 100 singles almost 50 years ago and are still Rocking All Over The World.

* To book tickets and for more details on the 2014 festival go to the website at www.international-eisteddfod.co.uk
Posted by llanblogger at 8:12 AM