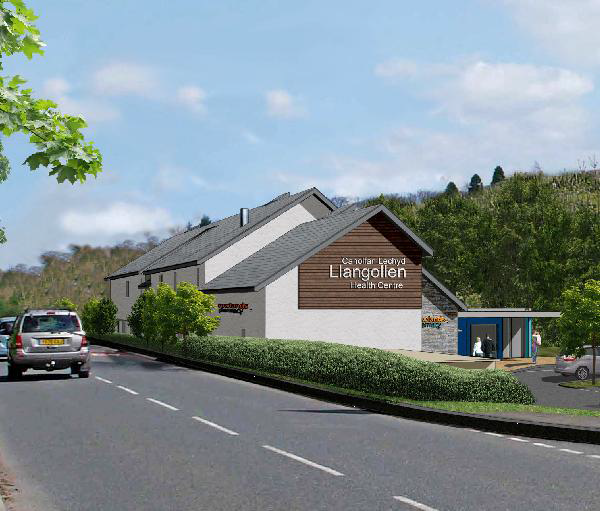 * An artist's impression of the planned new health centre.

The Daily Post is reporting today that the Welsh Government has approved the sale of the former River Lodge Hotel in Llangollen to the local health board as a site for a proposed health centre.

The story says: "The controversial hotel plot had originally been bought by the Welsh Government for £1.6m – above its market value – as part of a proposal to transform it into a martial arts centre.

Almost a year ago, an inquiry by the Wales Audit Office concluded that the decisions to buy the former 25-bedroom River Lodge Hotel in Llangollen for £1.6m in 2007, and to enter into a lease agreement with an organisation known as Powys Fadog, were “flawed and did not represent good value for money”.

Now economy minister Edwina Hart has approved the sale of River Lodge, Llangollen to Betsi Cadwaladr University Health Board, which plans to demolish it and build a health centre, after Llangollen Community Hospital was closed last year.

“The Wales Audit Office was scathing in its assessment of the unbelievable incompetence of Labour’s purchase of the hotel, which was beset by a major conflict of interest, a lack of risk assessment and no proper valuation.

“The Welsh Government’s earlier estimates suggested that the taxpayer would only get back between a third and a quarter of what the administration originally paid for the hotel.

“At a time when Labour Ministers are imposing record-breaking cuts on the Welsh NHS, evidenced by the recent closure of Llangollen’s community hospital, patients will be angry to see more evidence of millions of pounds thrown down the drain.”

A Welsh Government spokesperson said that it had no comment to make on the River Lodge issue further to the confirmation of the sale decision on its website.

A figure of £5.5m had been touted for the new centre but no official cost was officially confirmed.

A Betsi Cadwaladr University Health Board spokesperson said: “We look forward to progressing with the next stages of the new Primary Care Resource Centre project for Llangollen.

“The development is planned to provide a light, modern and spacious building to bring together a wide range of integrated services provided by the GP Practice, the Health Board, Denbighshire County Council Social Services and the voluntary sector, delivering as many services as close to patient’s homes as possible and allowing the ability to expand in the future. We are keen for this development to be completed in mid 2015.”
Posted by llanblogger at 5:00 PM