Popular Welsh singer Shȃn Cothi is about to step in the shoes of Oscar-winning actress Emma Thompson.
The former West End star (pictured below) will transform herself into the rough Cockney schemer, Mrs Nellie Lovett,  in Sweeney Todd - The Demon Barber of Fleet Street which will be the curtain-raiser for the Llangollen International Musical Eisteddfod on Monday, July 7. 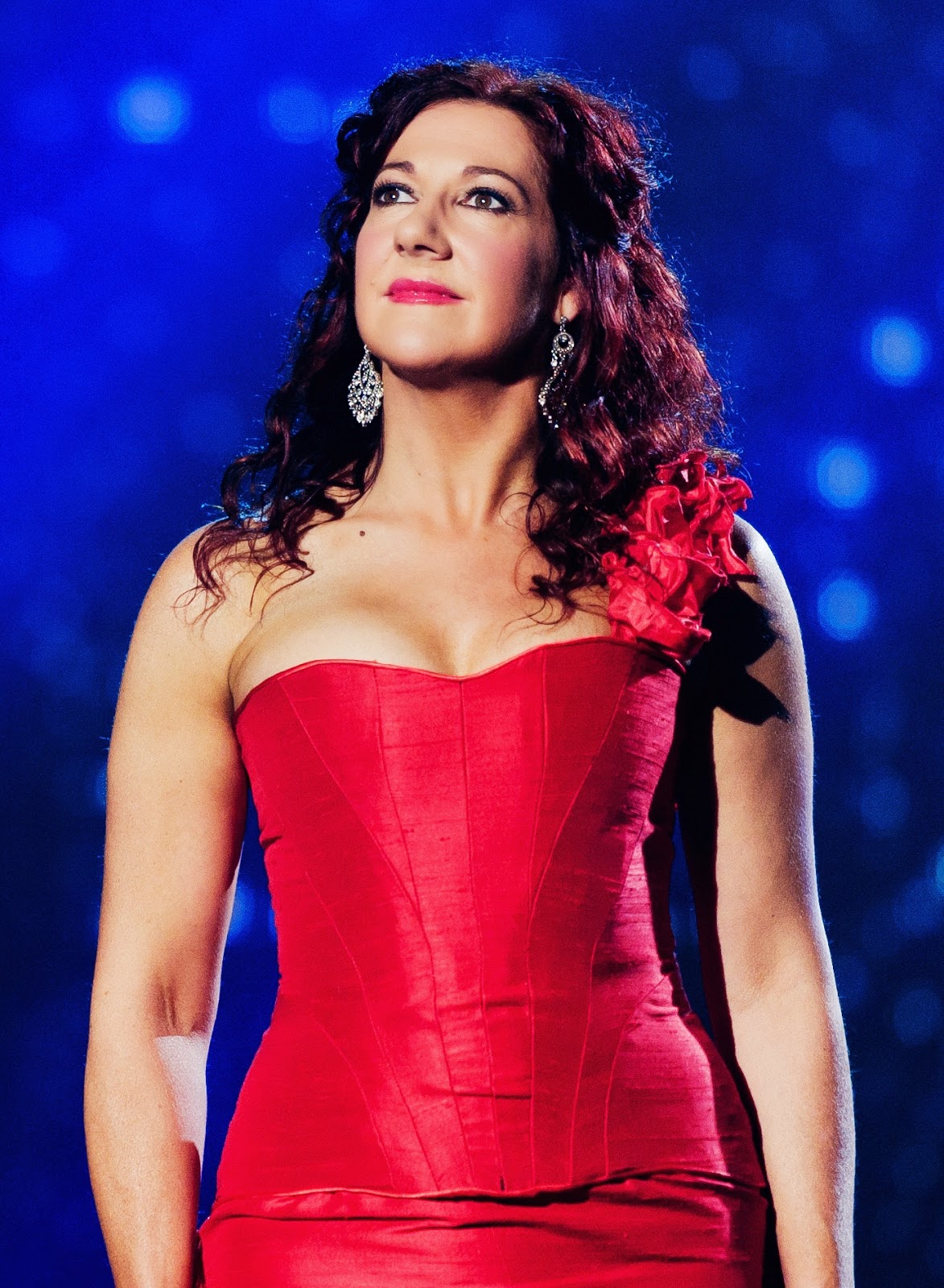 She be performing alongside old friends, opera superstar Bryn Terfel and the top tenor Wynne Evans aka Gio Compario in the Go Compare TV ads, in what promises to be a sensational opening night.
It will be a homecoming for one of Britain's top singing actors, Eric Roberts, who hails originally from Llangollen and will be playing the part of Judge Turpin.
Meanwhile, Alun Rhys Jenkins, one of the Three Welsh Tenors, will be taking the role of Beadle Banford while, mezzo soprano Leah Marian Jones, the former company principal at the Royal Opera House, Covent Garden, will be performing as the Beggar Woman.
They will be joined on stage by schoolboy Dewi Wykes, 14, from Ruthin, who was hand-picked by Bryn to play Tobias Ragg.
Dewi was alerted to the auditions for the role by his grandparents, Llinos and Tyrone Powell-Jones, who live in Wrexham, who had read about them in the Leader.
Earlier this year Bryn earned rave reviews when he played the Demon Barber in Broadway production co-starring Emma Thompson.
Shan is delighted to be part of the iconic international festival, forged in the aftermath of the Second World War with the aim of promoting world peace and harmony.
During the first full week in July every year since, Llangollen is becomes a cultural melting pot where Wales meets the world.
Singers and dancers, often resplendent in colourful national costumes, travel from the four corners of the earth to be part of the unique event.
For the time being though, Shȃn is concentrating on learning the role of the formidable Nellie Lovett.
“It’s scary to be honest”, she said, having just finished her morning Bore Cothi - Morning Cothi - show on BBC Radio Cymru, “It really is a huge role and I’m fully aware the audience will be full of real fans of the genre, people who know Stephen Sondheim’s work inside out.
“And while I have watched every production I can to get a feel for the role, I want to put my own stamp on the part.
“I do have a lot to live up to however, as there have been some amazing performers who have played the role. People like Angela Landsbury, who was the original Mrs Lovett, and Emma Thompson who won critical acclaim in the role opposite Bryn in New York just last month.
“Performers of that quality are the benchmark really and I’m going to have to work hard to get this important role just right.”
“I’ve taken on something really big and a bit out of my comfort zone.
“I’m spending three hours a day learning the part and thinking about how I want to present this mature, scheming, rough old Cockney bird to the audience. It’s going to be some transformation to be honest.”
But Shân says she accepted the role the second she was asked knowing she’d be appearing alongside old mates Bryn Terfel and Wynne Evans.
She said: “I competed at Llangollen many times but this will be my first appearance in an evening concert. I really am looking to get my teeth into the Mrs Lovett role.
“She a cheery sort whose business is on a bit of downward spiral due to a lack of fresh meat and she really wants to be a bit more than a landlady to the mean and moody Sweeney Todd.”
Shân Cothi was born, the daughter of a blacksmith in a little village, Ffarmers, in Carmarthenshire and graduated from the University College of Wales, Aberystwyth having studied music and drama.
After leaving university she was initially a music teacher at a South Wales high school but decided to turn professional, as a singer, after winning the prestigious Blue Riband prize at the 1995 Abergele National Eisteddfod.
Since then her career has spanned a wide range of music styles from opera to oratorio and musical theatre, she played Carlotta in Andrew Lloyd-Webber’s The Phantom of the Opera in the West End for 15 months, to traditional Welsh songs.
And she’s performed in some of the UK’s iconic venues from the Wales Millennium Centre to the Royal Albert Hall as well as abroad.
Bryn Terfel, Wynne Evans and Shân Cothi will appear in Sweeney Todd – The Demon Barber of Fleet Street, sponsored by Pendine Park Care Organisation, at the Llangollen International Music Eisteddfod on the evening of Monday, July 7.
This year’s Eisteddfod will also feature concerts by Dutch jazz sensation Caro Emerald and veteran British rockers Status Quo as well as a world premiere of a new work, Adiemus Colores, by top composer Karl Jenkins.
He will conduct his Latin American themed work with American tenor Noah Stewart, Venezuelan trumpeter Pacho Flores and Latvian accordion player Ksenija Sidorova to the accompaniment of the Llangollen International Eisteddfod Orchestra.
The Friday night concert, Spirit of Unity, will feature the Cape Town Opera, Africa’s premiere opera company, famed for their "vibrant vocalism and high-octane stage performances".
Appearing with them will be Wales’ representative in Cardiff Singer of the World, Gary Griffiths, the Wales Millennium Centre Only Kidz Aloud Chorus under the baton of celebrity conductor Tim Rhys Evans and British Sinfonietta, one of the UK's leading independent professional orchestras.
The Choir of the World competition for the Pavarotti Trophy on the Saturday night is the blue riband event of the week-long festival which will close with a Sunday night concert by Status Quo.
For tickets and more information visit http://international-eisteddfod.co.uk/ or call the Box Office on 01978 862 000.
Posted by llanblogger at 8:09 AM