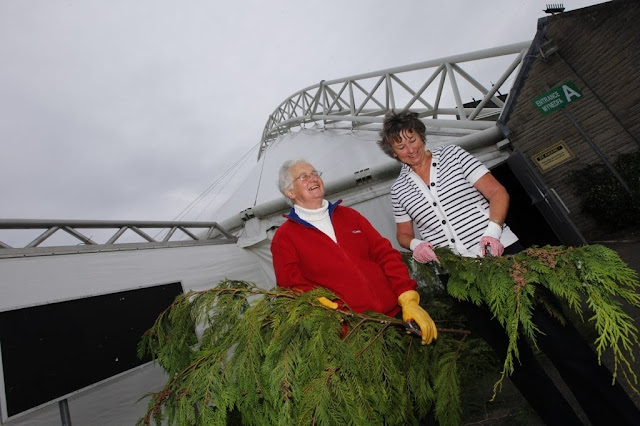 * Ann Eagar, left, and Jane Jones on the floral displays.

Sunny skies and soaring temperatures are expected to make this a bumper year for the 67th annual Llangollen International Musical Eisteddfod which starts tomorrow (Tuesday).
Ticket sales are already racing ahead of last year’s successful event with top attractions like keyboard king Jools Holland and Strictly Come Dancing stars James and Ola Jordan attracting big audiences to evening concerts.
But ticket sales to all the concerts are going well, according to Treasurer Selwyn Evans, who said: “We are already within £85,000 of our target of £440,000 and we would expect to pass that comfortably now.
“The weather seems set fair to and that is great news because there is so much on here on the field during the days and that makes an outing to the Eisteddfod a fantastic experience.
“Ticket sales for the concerts are going really well but we still have tickets left for each one.”
Thousands of people from around the world will again descend on the town for the Eisteddfod which began as a festival of peace in the aftermath of the Second World War and has since grown into one of Europe’s premier music and dance events.
It has attracted cultural icons like Dylan Thomas and the great Italian tenor Luciano Pavarotti, who began his international career as a member of a choir from Modena at Llangollen in 1955.
In recent years artists of the stature of Bryn Terfel, Katherine Jenkins, Kiri Te Kanawa, James Galway and Montserrat Caballe have performed at the final Sunday Evening Gala Concert.
Most importantly the competitors have continued to come from all over the world – this year they will be here from Alaska, the Philippines, Russia, South Africa, Hong Kong, Australia, Canada, China, India, New Zealand and Ghana as well as from all over Europe and the UK.
This year’s event runs from Tuesday, July 9, when the colourful traditional procession through the town will be led by Eisteddfod Patron Terry Waite, through six days of competitions and concerts to Sunday’s spectacular fireworks extravaganza.
The evening concerts start with Tuesday night’s Carnival of Nations featuring four of Wales’s finest male voice choirs, the Rhos Orpheus, Cor Godre’r Aran, Cor y Brythoniaid and the chart topping Fron Choir, performing on the 60th anniversary of the historic visit of Germany’s Oberkirchen Choir. They will be joined by the St Melodians Steel Band, from Trinidad and international competitors.
Wednesday night will feature An Evening with Scottish percussionist Evelyn Glennie who will be joined by the rising American tenor Noah Stewart and harpist Claire Jones, former official harpist to HRH the Prince of Wales, along with the Eisteddfod Orchestra and the Santo Tomas Choir from the Philippines, twice Choir of the World winners.
Thursday will be Strictly Cuban, a celebration of Latin dance rhythms with James and Ola Jordan and the Buena Vista Social Club while Friday will be VERDI 200, a performance of Verdi’s Requiem by to mark the 200th anniversary of the composer’s birth with Claire Rutter, Mirouslava Yordanova , Gwyn Hughes Jones, Jonathan Lemalu and accompanied by the Eisteddfod Orchestra conducted by Andrew Greenwood.
Saturday is Choir of the World which this year will also feature Only Men Aloud, Last Choir Standing TV winners while for the first time dance will be teamed with choral music on Saturday night as the Eisteddfod’s top two dance troupes dance off for the new Dance Champions 2013 Trophy.
On Sunday keyboard king Jools Holland will bring the house and the curtain down with his Rhythm and Blues Orchestra before the spectacular firework finale.
The Eisteddfod field will also be alive and buzzing every day of the week with international performances on the new and improved undercover Outside Stages.
Visitors can enjoy live music at the 200-seat S4C Stage, join in with a dance workshop on the Amphitheatre Wrexham Lager Stage or listen to live storytelling on the Lawn Stage.
And in the early evenings the S4C Stage will be transformed into an amazing window on world music for The World @ 6 programme of song and performance from Persia, the Indian subcontinent, Africa and more.
Throughout the week world-class competitors perform in a spectacular celebration of cultures with stunning choral music and lively traditional dance, especially on Folk Friday when the outdoor stages will feature world-class music and dance.
The Eisteddfod is a complete international experience and that goes for the food too. Home-cooked Welsh produce is on the menu but so are the cuisines of Europe, China, India and the rest of the world and there’s excellent local Llangollen ale.
There are gifts and clothes from South America, jewellery, wooden toys and Welsh-made products at more than 40 stalls, including exhibitions of festival supporters, Extreme Animals and Owl Rescue Display, charity groups and more including jugglers, escape artists and magic tricks.
For tickets for this year’s concerts and for more information go to the website at www.international-eisteddfod.co.uk and on Facebook at www.facebook.com/llangollen
Posted by llanblogger at 6:30 PM