Over 8,000 breath tests were administered throughout North Wales during the month-long Anti Drink and Drug Driving Summer Campaign.
Led by Gwent Police, officers stepped up the pressure in a concerted effort to deter people from driving motor vehicles whilst under the influence of alcohol or drugs.
During the June campaign a total of 19,906 breath tests were administered throughout Wales with 436 being arrested. 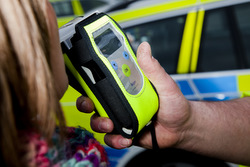 North Wales Police administered 8,281 breath tests with 109 testing positive, which equates to 1.3%.
Chief Inspector Darren Wareing from North Wales Police said: “We want to get the message across that drinking alcohol and driving or driving under the influence of drugs is unacceptable and that it puts other roads users’ lives at risk.
“Through our annual Christmas and summer campaigns we have consistently warned the public that drink and drug driving can kill. It can also lead to a lengthy driving ban and possible loss of jobs and livelihoods with some even facing imprisonment.
“We are disappointed that there is still a group of people who are not listening or ignoring the consequences and continuing to drink or take drugs and drive.
“With the current warm weather, more people may be tempted to have a few drinks, at barbecues or whilst drinking in beer gardens during the afternoons, and may drive without thinking of the consequences.
He added: “Think before you go out, watch what you drink and plan how you will get home.”
North Wales Police has a robust strategy around enforcing the ‘Fatal 5’ offences which are drink and drug driving, dangerous driving including unnecessary risk taking, speeding, failing to wear a seatbelt and using a mobile phone whilst driving.
Chief Inspector Wareing added: “We are committed to assisting in reducing casualties on the road through the use of targeted operations around high risk groups of people and locations while enforcing the ‘Fatal 5’ offences.”
“It is important to stress that the work does not stop here – any amount of alcohol affects your ability to drive, campaigns such as this raise awareness and we will continue to target those breaking the law as part of daily policing.”
Anyone with information regarding individuals who are believed to drive whilst over the legal limit or under the influence of drugs, can contact North Wales Police on 101 or Crimestoppers anonymously on 0800 555 111.
Notes:
Posted by llanblogger at 2:31 PM