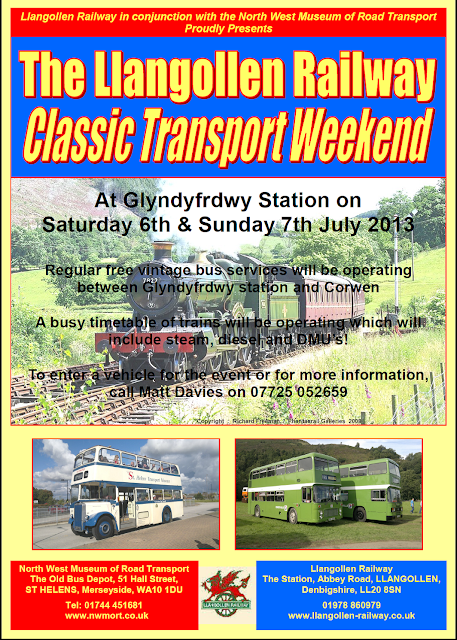 A former Chester City Transport bus is making a journey into Wales this weekend, July 6/7, from its base at the North West Museum of Road Transport in St Helens, Merseyside.


The Guy Arab double decker was new to the Chester in June 1953, Coronation year, and sported the No.1 in the bus fleet.
In celebrating its 60th anniversary it will be joining other examples of classic transport for the rally organised by the museum at the field near the railway station in Glyndyfrdwy.
Organiser Matt Davie said: "The field at Glyndyfrdwy offers a splendid location for a gathering in association with the heritage railway.

"Based on our experience of previous events, we will again be offering visitors to the rally the chance to sample a free ride on the vintage buses when they make demonstration road runs between Glyndyfrdwy and Corwen on Saturday and Sunday.
"Those travelling along the A5 road will have the opportunity to see the work on the railway's extension west of Carrog and be able to view the location of the temporary platform to be sited at Corwen East.
"As well as the road transport vehicles attending, we are also expecting members of the Jowett Car Owners Club to be gathering at Glyndyfrdwy with examples of this iconic British automobile, on this the 90th anniversary of the club's formation."
In support of the classic transport rally, Llangollen Railway will be operating a half hourly train service on the heritage line in the Dee Valley with a mixture of steam and diesel locomotives and diesel railcars to add the variety of transport items from a bygone era.
The Jowett Car Club celebrates the classic British cars made in Bradford from 1906 to 1954, including the Jupiter, Javelin, Bradford, Jason, Black Prince, Curlew, Kestrel, Weasel, Flying Fox, Falcon, Long Four, Focus, Blackbird, Kingfisher, Black Prince, Wren, Grey Knight, Silverdale, Chummy, 7cwt Van and Short Two.
Posted by llanblogger at 7:30 AM