Steam loco damaged as yobs leave log on the track 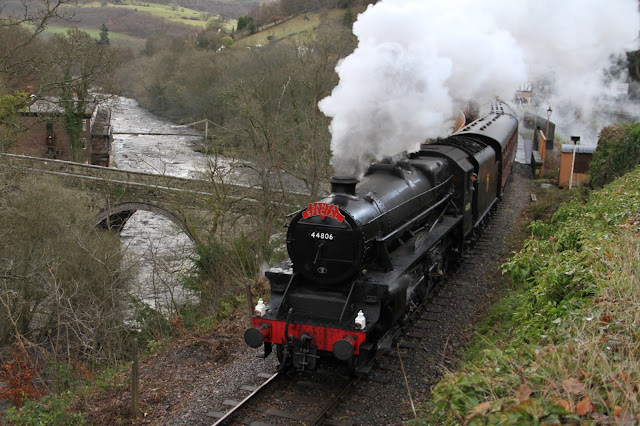 * The Black Five locomotive, which was damaged in Saturday’s incident
on the track, pictured on a Santa Special Train near Berwyn.


An historic steam engine was damaged by yobs leaving a wooden log on the track … as it hauled a murder mystery special carrying over 100 people on the heritage railway line from Carrog to Llangollen on Saturday.
A railway chief says the incident could easily have caused a derailment and serious injury to passengers and crew.
North Wales police, who say extensive damage was caused to the train, are now investigating the incident which took place at around 9.20pm and have launched an appeal for witnesses.
Railway spokesman George Jones said:  “Llangollen Railway Plc holds a number of evening events throughout the year.
“On Saturday evening, the summertime Murder & Mystery Special operated along the line from Llangollen to Carrog with the Black Five steam locomotive No.44806.
“During the return journey from Carrog, when the locomotive was working tender first, an incident took place involving the placement of a wooden log between the rails of the track at a remote point below Pen-y-Garth, between Glyndyfrdwy and Deeside loop.
“The locomotive involved has been examined and has been found to have sustained damage to the running gear of the tender and locomotive.
“An assessment is being made as to the repair costs, but it will be out of service for some time and this means that no stand-by engine will be available during the busy summer season.”
Railway chairman, Jim Ritchie, commenting on this incident, said: “The board of Llangollen Railway is pleased that, although this incident could have resulted in the derailment and potential injury of crew and passengers, it was fortunate that no one was injured and the train was able to continue its journey back to Llangollen.
“The board attaches the greatest priority to the safe operation of the railway and such an act of vandalism by persons unknown is of the deepest concern.
“The object placed on the track was of a size which could potentially have caused a derailment to a smaller locomotive or a diesel railcar. With over 100 passengers on the train that would have resulted in injury or worse to crew or passengers.”
He added: “The Llangollen Railway is co-operating with North Wales Police who are investigating this incident and appeals for anyone who has information to provide it to the police. The incident has been reported to the Office of the Rail Regulator.
“The penalty for trespassing on any railway, including heritage lines such as Llangollen Railway, is £1,000 and, of course, anyone involved in such practice endangers not just themselves, but also the train crew and passengers using the railway.”
·         Anyone with information regarding the incident is urged to contact PC 2820 Sarah Smith at Llangollen on 101. Alternatively, anyone with information can contact Crimestoppers anonymously on 0800 555 111.
Posted by llanblogger at 12:23 PM