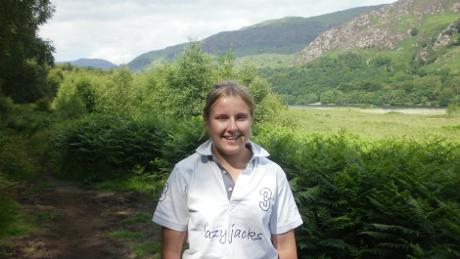 * Caryl Hughes now has the keys of Llyndy Isaf.

Life changed completely for one young woman from near Llangollen at the Royal Welsh Agricultural Show earlier this week.

Winning the scholarship means Caryl will be given the keys to Llyndy Isaf - the iconic 614-acre upland farm in Snowdonia saved for the nation through the Snowdonia Appeal in 2012 – and take control of the farm for a year starting in September.

Caryl told us she was both on top of the world and nervous about the challenges ahead of her with this unique opportunity, which she believed would be life changing for her and her dog Mist – who will be moving with her to Llyndy Isaf.

Caryl said: 'This is a once in a lifetime opportunity that I intend to take full advantage of. It’s not every day you get the chance to farm a 614-acre farm, especially not at the age of 23 and especially if you are female.

"I’m a bit nervous of taking on Llyndy, it is a daunting challenge, especially because it hasn’t been farmed for a number of years, but I’m really excited about it and all the new experiences and opportunities I’m going to get in the next 12 months. I’m really looking forward to working with the National Trust and getting to know the whole team and all of their work – especially in agriculture.

"I don’t see it why we can’t do it as well as the ‘boys’, if not better. Women are renowned for being better at multi-tasking, but I’m confident I’ll rise to this challenge as well as anyone else. My priorities will be to re-establish a flock here with good grazing management to retain this natural environment around us. That’s Llyndy’s unique quality and challenge all in one.

"The views in Snowdonia are spectacular and I feel honoured to be allowed to live and work there - but also it’s not too dissimilar to home-so maybe that’s why it appeals to me.

Appeal saves Llyndy for the nation

Llyndy Isaf farm drew international attention when it was saved for the nation in the National Trust's successful one million pound fund-raising appeal last year.

The campaign to acquire Llyndy Isaf was spearheaded by Welsh Hollywood actor Matthew Rhys in his role as Snowdonia Appeal Ambassador.

The Americans series star said: "When I visited Llyndy Isaf, I could see that such a beautiful and special part of Snowdonia demanded our support. I am delighted that Caryl now has the opportunity to learn a vocation and time-honoured way of life, where she can contribute to the survival, preservation and future of this incredibly important place."

This 'once in a lifetime' offer is the result of an innovative partnership between the National Trust and Wales YFC.

Applications were invited from all Wales YFC members. The scholarship was designed to encourage the successful candidate to develop key skills and broaden their knowledge of the industry. The winning scholar will have the opportunity and responsibility of managing all aspects of running the farm including form filling, stock management and practical work.

Caryl is 23 on 28 July, and lives on an upland farm with her parents and brother in Dyffryn Ceiriog.

She went to Aberystwyth University where she studied agriculture and animal science. As part of the course, Caryl went to live and work in New Zealand in her third year - on a milking farm for eight months and a sheep farm for 2 ½ months.

Caryl is interested in training and working sheepdogs (she has a sheepdog called Mist who’s eight-years-old, and who will be joining her at Llyndy).
Posted by llanblogger at 7:05 AM