Musical director brings touch of magic to the Eisteddfod 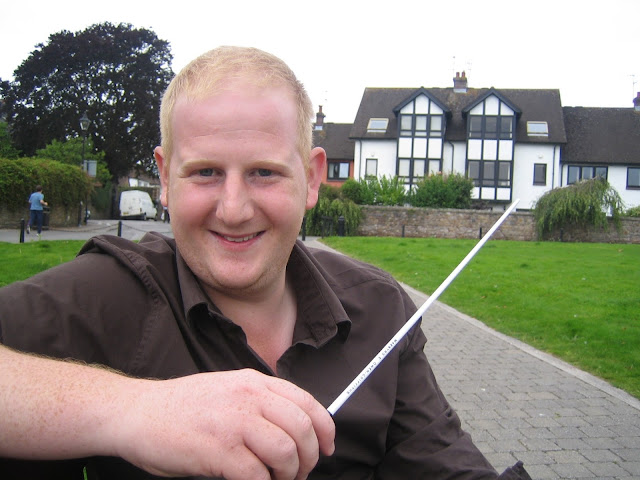 The man responsible for this year’s stellar line-up at the Llangollen International  Musical Eisteddfod is used to pulling rabbits out of hats – he’s a member of the Magic Circle.

Musical Director of the Eisteddfod Eilir Owen Griffiths is not just an acclaimed choral conductor and composer – he is also magic at getting some of the biggest stars to sign up for the world-renowned event.

The enduring appeal of the Llangollen International Musical Eisteddfod is the calibre of artists it attracts – names like Pavarotti, Menuhin, Bryn Terfel and Lulu - and this year is no exception.

Jools Holland, Strictly Come Dancing stars James and Ola Jordan and opera singers Noah Stewart and Claire Rutter are signed up and that’s down to the Llangollen factor and the pulling power of the Eisteddfod’s young Musical Director Eilir Owen Griffiths.

The 31-year-old, who lives in Cardiff, teaches in Carmarthen but is born and bred in North Wales, has helped turn the event round within 18 months of his appointment.

In that time Eilir has proved himself not just an acclaimed choral conductor and composer but also magic at getting some of music’s biggest stars to sign up for the world-renowned event.

Not bad for a kid from St Asaph who cut his musical teeth performing for Women’s Institutes and chapels as part of the family ensemble headed by his father, Welsh Presbyterian minister the Rev Robert Owen Griffiths and his mum, Rhiannon.

Also on the strength were brothers Peredur, Hedd and Eilir and little sister Hannah with the young Eilir adding variety to the entertainment with a magic show.

He said: “We were a sort of Von Trapp family on the chapel circuit in North Wales for about ten years. I played the piano and violin and sang – and did magic tricks.

“My mum was a librarian and we had to go to the library after school to wait for her to finish work before she took us home. I hated reading so I headed for the crafts and hobbies section and picked up a magic book and was fascinated.

“I learned how to do tricks and I actually became a member of the North Wales branch of the Magic Circle.”


Eilir, who lives in Taffs Well, near Cardiff, with his wife, Leah, son Aaron, three, and just-born Gwenni, had a wandering childhood as his father’s ministry took to Denbigh, Pumpsaint, in Carmarthenshire, Moelfre on Anglesey, and Lixwm, near Holywell.

He was head boy of Ysgol Glan Clwyd, St Asaph, before going to study Theatre, Music and Media at Trinity College, Carmarthen, where he now teaches, before taking a Masters in Music.

His specialism now is composing and conducting choirs and his record is outstanding including the Worshipful Company of Musicians Award (2005) and in 2008 the Main Composers Prize at the National Eisteddfod of Wales Cardiff.

He has released a CD of his work, titled Y Gair, while as a conductor he has won many major prizes with his choirs, Côr Aelwyd CF1, Côr Godre’r Garth, Côr y Drindod and The Blues Choir.

He became established as a conductor-composer on a year’s exchange study in the USA at Central College Pella, in Iowa, when he conducted a piece he had composed in a church there.

He has composed a Reqiuem performed by superstar Bryn Terfel, Wynne Evans and a massed choir but also works in musical theatre with students at Trinity College so his taste is varied.

The religious connection is important and he said: “A lot of my choral music is very religious and although I don’t have strong religious views I do find that I can transfer the message in religious text into music.”

He regards being Musical Director of Llangollen as a pinnacle though, because of its standing internationally and he said: “When the job came up there were two reasons I wanted to go for it – the challenge and because everyone refers to me as Eilir Owen Griffiths Caerdydd because that’s where I live but my North Wales connection is important to me.

“I also respect Llangollen more than anything else because over the years they have managed to make more of an impact than any other eisteddfod and it was an exciting thing to be part of.

“Last year the main thing was that it happened and made a profit after five years of losses which was even more remarkable because the weather was so terrible.

“Now in 2013 we’re in a much stronger position and it fills me with pride that we have turned it round in 18 months.

“Basically, I’m responsible for everything artistic in the Eisteddfod – it’s a hell of a challenge and a very difficult balancing act but from the feedback we’re getting about the concert programme is that even though it’s diverse it’s been very, very well received.

“It’s got something for everyone and it maintains the International Eisteddfod’s reputation for excellence.

“We wanted a jazz pianist and we’ve got Jools Holland, you couldn’t get better. We have James and Ola Jordan from Strictly Come Dancing and they’re performing to the music of the Buena Vista Social Club from Havana and without musicians like them there just wouldn’t be this tradition of Latin American dance.

“If you want choral music than we’ve got the best choral competition with the best choirs, certainly in the UK, probably in Europe but I won’t say the world because there is the Choir Olympics.

“But the Choir of the World for the Pavarotti Trophy is the best and most high profile competition on the choral circuit and the connection with Luciano Pavarotti is very important.

“The best of the best are still coming to Llangollen and you just would not hear choirs of this standard anywhere else in Britain.

“It’s important that it’s in Wales but what’s important is that it’s an Eisteddfod, it’s what our tradition is based on, the idea of competition, whether at Urdd level, National Eisteddfod level or International level.

Eilir, himself, has wide ranging tastes and is looking forward to the concerts though he expects to be too busy to catch more than snippets of them: “If I could only listen to one it would probably be Jools Holland but then I would like to take elements of them all.

“I don’t just like classical music, I like avant garde and I like jazz and every night of the concerts should have its own USP and you can’t see what we’re putting on or the combination of artists anywhere else.

“The National Eisteddfod has the same artists every year – I don’t want that for Llangollen. I want something different and unique every year but the reality is that I won’t get to sit through any of them – except one and that’s Choir of the World

“I chair the panel of judges for that and when I was interviewed for the job one of the first questions I asked was would I be the person who actually gets to say who wins Choir of the World – and I do.

“Last year one of my highlights was announcing on the stage who had won and I’ll get to do it again this year and that’s a thrill, it’s magic.”

For more details on this year’s event go to the website at www.internationaleisteddfod.co.uk and on Facebook at www.facebook.com/llangollen
Posted by llanblogger at 8:05 AM