Chain Bridge facelift can go ahead thanks to £350,000 grant 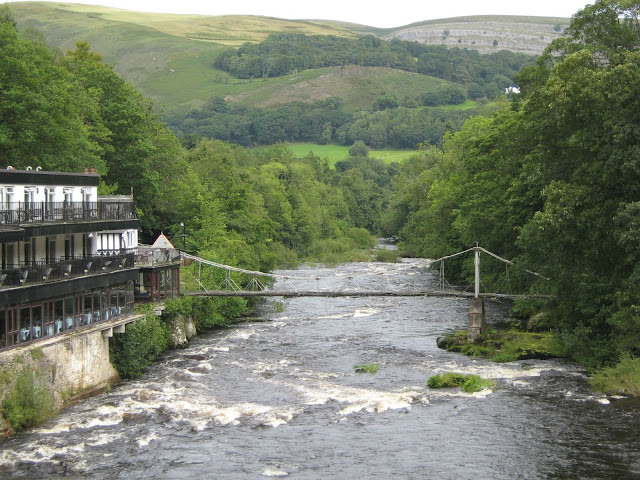 * The historic Chain Bridge is to be brought back to life after 30 years of dereliction.

A VISIONARY scheme to bring Llangollen’s world famous Chain Bridge back to life is set to go ahead after receiving a £350,000 cash boost.


At their meeting last night (Tuesday) members of the town council were given the good news that their grant application to the Heritage Lottery Fund (HLF) – made jointly with neighbouring Llantysilio Community Council – has just been approved.
And Llangollen’s mayor said he was hopeful the historic bridge spanning the River Dee, which has been closed for safety reasons for 30 years, will be re-opened to the public early next year.
The two councils bought the bridge from its previous owner, businesswoman Stephanie Booth who also ran the adjacent Chain Bridge Hotel, in 2007 and have since been working to secure the funding necessary to see it repaired and returned to its former glory as a major tourist attraction.
First injection of cash came a few years later when the HLF made a grant of £28,900 to pay for the preparation of a detailed report on how the bridge could be restored.
The project took another step forward last month when it landed a grant of £50,000 from WREN, a not-for-profit business which awards cash to community, environmental and heritage projects.
The bridge crosses the river, which itself runs parallel to the Llangollen heritage railway line on one side and Llangollen Canal on the other near its source, the Horseshoe Falls.
The plan is to fix the bridge and create disabled access via nearby Berwyn Station along with an exhibition and other community events.
The HLF grant bid included working with community groups such as local schools and history groups, including Llangollen Museum.
One of the aims is to see tourists travelling along Llangollen Canal via horse-drawn boats and then crossing the bridge to take a steam train ride back into Llangollen.
The original bridge was built around 1817 by Exuperius Pickering, a local entrepreneur dealing in coal, limestone, slate and iron bar, who is reputed to have called on engineer Thomas Telford to help with the design and construction.
The new bridge allowed Pickering to monopolise the local coal trade as it gave him access to the adjacent London to Holyhead road - the A5.
It also meant he avoided paying tolls to cross the main bridge over the river in Llangollen.
In 1876 the bridge was replaced by Sir Henry Robertson, a part owner of Wrexham's former Brymbo Ironworks.
In 1928, freak flooding washed away most of the bridge and it rebuilt in a style similar to Anglesey's Menai Suspension Bridge.
It was closed in the mid-1980s due to concerns over its safety.
At the Llangollen Town Council meeting, town clerk Gareth Thomas told members: “Our Heritage Lottery Fund grant of £350,000 has now been confirmed.
“All things being equal we should now be able to proceed in August.”
The mayor of Llangollen, Cllr Bob Lube, said later: “This is fantastic news.
“We now look forward to creating a circular route for tourists between the canal and the railway via the bridge, which I am sure will add to the visitor experience we already have.
“It is great that the council has been able to do this. Work can now go ahead and we are hopeful the bridge will open again early next year.”
Posted by llanblogger at 8:15 AM