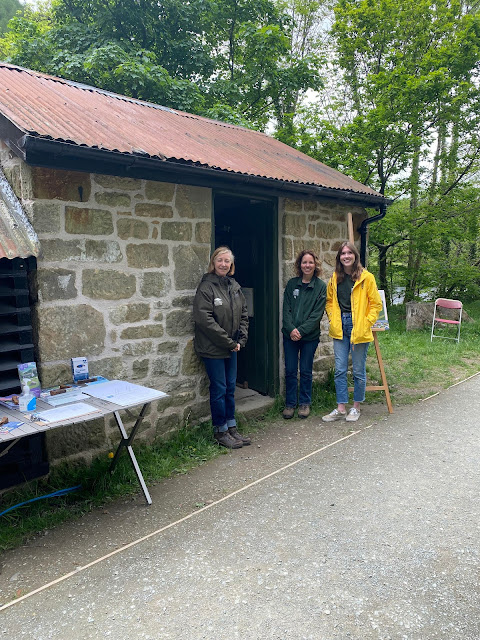 * The Our Picturesque Landscape team outside the Lengthsman's hut.

After six months' preparation the area around the meter house at the Horseshoe Falls has been transformed to create an improved visitor welcome.

The job was undertaken by the Our Picturesque Landscape project, which is a landscape partnership scheme funded by the National Lottery Heritage Fund based in the Dee Valley.

Partnership officer heading the small team running the project is Kate Thomson who said: "Using Welsh Government Brilliant Basics and National Lottery Heritage funding, the area around the intake and the meter house has been transformed to create a much improved visitor welcome.

"To celebrate this we formally opened the Lengthsman’s Hut to the public for the first time yesterday (Tuesday).

"It has been closed up for many years and has been decorated as if the lengthsman has just popped out to work and will be back shortly.

"At the opening we were also trying to recruit volunteers to open it up going forward.

"The Lengthsman's Hut is located opposite the meter house on the canal towpath, just past the Chainbridge Hotel."

In one of her first official engagements since being elected as one of Llangollen's two new county councillors, Karen Edwards visited the project yesterday.

She said: "I was delighted to be invited to the opening of the Lengthman’s Hut and meet the team involved with the picturesque landscape project.

"It’s so important to restore and preserve these buildings that are part of the heritage of the Dee Valley."