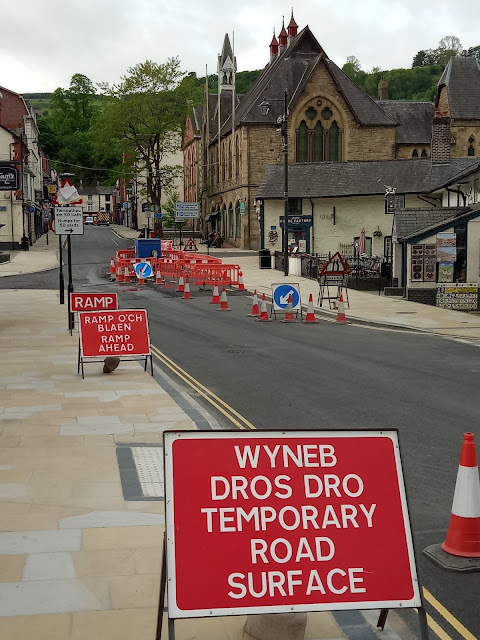 * The pumping machine in action on Castle Street.

The current traffic disruption in Castle Street is due to construction debris from the ongoing 2020 project falling into a manhole and blocking a sewer pipe, according to Denbighshire County Council.

A spokesperson for said this morning (Monday) told llanblogger: “Whilst carrying out road resurfacing work in Castle Street on Friday evening, some construction debris accidentally fell into a manhole and became stuck within a sewer pipe.

"When this did not work, a camera survey was undertaken which revealed the debris had lodged against a damaged section of pipe.

"The council is now liaising with Welsh Water to discuss options for repairing the damaged pipe. We would like to thank the public for their understanding and to apologise for any disruption caused whilst these works are undertaken."

Further information about the problem has been obtained from the council by new Llangollen County Councillor Karen Edwards who said: "The obstruction caused the surface water and sewage in the manhole to back up and started to flood out of the manhole last Friday.

"This was despite the best efforts of the drainage contractor who was brought in to clear the blockage through rodding.

"I am told that two options exist - an attempt to repair the damaged pipe, which will require a 1.2 metre deep excavation to access it, or a short length of pipe being run from the affected manhole to an adjacent one."