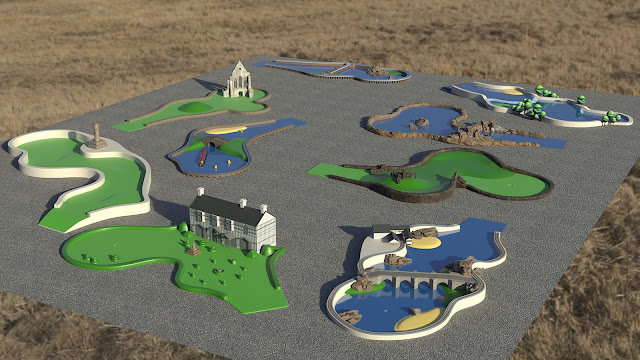 * How the new mini golf area will look.

A massive £200,000 injection of Welsh Government money will help bring a range of improvements to Llangollen’s Riverside Park.

The cash is part of a £2.9 million package announced by Economy Minister Vaughan Gething under the government’s Brilliant Basics capital fund to be shared among 18 projects that will help deliver small-scale infrastructure improvements in strategically important tourism locations across Wales.

According to the government announcement, in Llangollen “improvements will be made to this popular destination and include mini golf, play equipment, green infrastructure, including E-bike charging points, water play infrastructure, bandstand seating, interpretation boards and ramped access between levels of the park”.

The fund, which is supporting local authorities and national parks to deliver the improvements which will benefit both communities and visitors, will finance projects to help alleviate pressure in areas that are seeing increased visitor numbers.

Brilliant Basics will also support projects to improve accessibility to sites and projects that make their destinations more environmentally sustainable.

Llangollen Parks Project, a community group made up of local parents, has been spearheading the campaign for improvements to the park, which is run by Denbighshire County Council.

Its spokeswoman, Jessica Evans, said: “When the Brilliant Basics  funding became available we saw the opportunity to work with DCC to look at applying for improvements to the play equipment and band stand as well as improving accessibility around the park.

“We have also been able to apply for some money to install the required water pipe input and electricity supply to the location that we hope will contain a splash pad/ water play facility which we will aim for in future funding applications.”

She added: “The full value of the project is £250k which should make a huge difference to the park.

“The bid focused on much of the feedback we had received from the survey we put out about the park a few months ago, most notably making the facility a much more inclusive one and ensuring that the Riverside Park is a place where people of all ages can come and enjoy this stunning location.

“The play equipment should cater for a much wider age range than it currently does and also have a greater capacity to cater more easily for the numbers that use the park.

“We are so delighted that Paul Evans and the team at Denbighshire Countryside and Clwydian Range and Dee Valley AONB had the vision to work with us and push this project forward. We were also encouraged and supported by Ken Skates with this application and are very grateful to him for his support.

“The project should be completed by spring 2023 so a very exciting and busy time ahead. We can't wait to see the finished project and the difference that this will make for people living in and visiting Llangollen.”