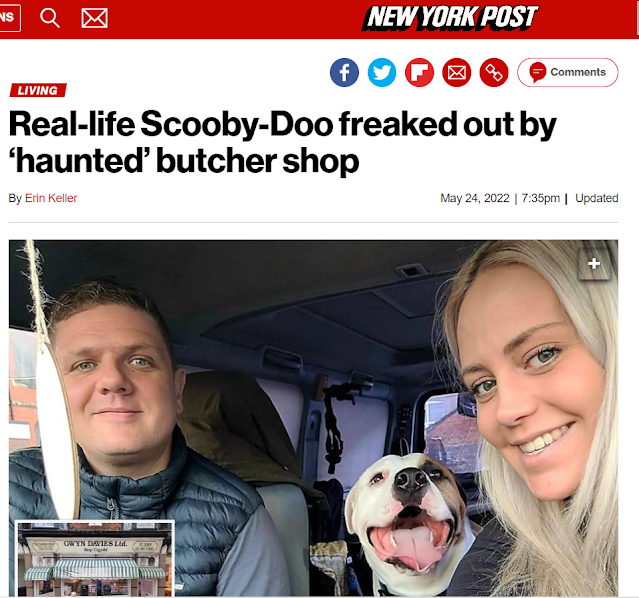 * The story in the New York Post. Marc Mountford and Katie Morran feature with Cooper the mastiff.

A story which started off in llanblogger has just hit the pages of the New York Post.

Earlier this month we reported on a string of local Facebook messages about a dog which refused to walk past the former Gwyn Davies butchers shop in Castle.

And theories abounded that the pooch may have shied away because the empty shop was haunted.

The story was first picked up by a regional newspaper and has now made its way across the Atlantic to the Post in New York.

The story says: "A couple and their 168-pound Mastiff, Cooper, had a real-life Scooby-Doo moment in Wales while traveling in their camper that they appropriately named their “Mystery Machine.”

According to Daily Post UK, Marc Mountford and Katie Morran said their furry friend “went mental” when he passed a former butcher shop in Llangollen, Wales, that is said to be haunted.

“As soon as he reached the shop, he went wild,” Mountford said. “He was uncontrollable — I was so close to going under a coach [bus].”

Luckily, several people were around and helped the couple control Cooper.

“We had to get him across the road to calm down. But he was still shaking,” Mountford added. “He wasn’t making a noise but his tail was between his legs and he was clearly in distress.”

This isn’t the first time the pup’s been spooked by the shop, either. The family has taken the Mystery Machine to Llangollen four times, and said Cooper’s spooked reaction is always the same.

“This behavior is totally out of character,” he continued. “He’s a lovely dog and we’ve been past plenty of other butchers’ shops with no problems — especially if we pop in for a bone! But there’s something about this particular place.”

The now-vacant shop belonged to Gwyn Davies until he retired last year. Some Facebook users wondered whether Cooper could smell the old slaughterhouse in the back of the building.

Old photos of the town show carcasses hanging up in front of the shop.

“Row upon row of sheep, cows and chickens, before Gwyn had it,” said one Facebook commenter, the Daily Post reported.

Another added, “[The] smell of blood, maybe it lingers?” While a third comment read: “[Cooper] feels like he is walking past a graveyard with all the dead meat in there.”

The theories continued as an alleged former employee of the butcher shop chimed in, saying the cellar and an upstairs apartment were both haunted.

One of the people that helped the couple calm Cooper was a town historian. The couple happened to meet her in a neighboring town after the encounter, and she told them she’d find a history book with the ghost story recorded — which she did.

According to “Tales of Llangollen: Past and Present” by Trevor Roberts, the shop’s then-butcher swore he saw the owner of a nearby fishing tackle shop outside while on his way to work.

Once inside, he was informed the angler had died the day before, but the butcher always stood by his sighting."

* The story has also appeared in the Mirror in the UK. 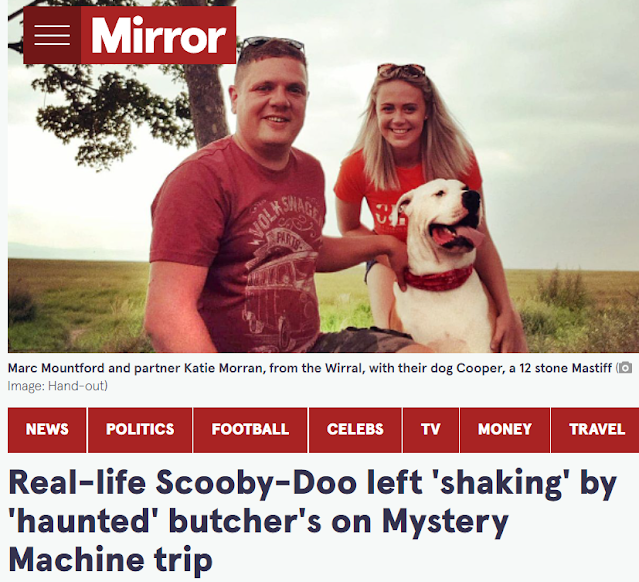