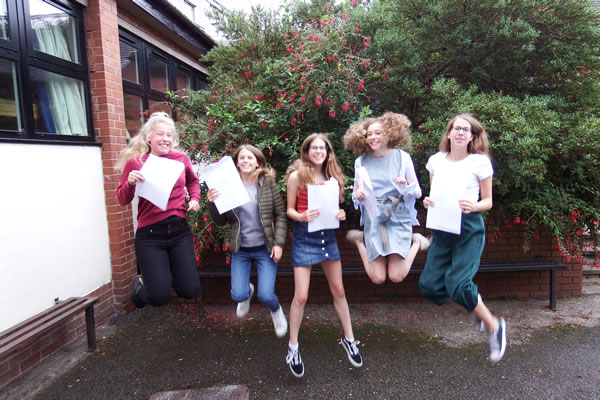 * A level students jump for joy at their results.

Overall the pass-rate at A level (grades A*-E) was a very pleasing 98%, with over 80% of grades awarded at A*-C, well above national averages.

Among subjects, Design and Technology, Art and Design, Drama, Geography, History, Maths, PE, Music, Spanish and Psychology all had 100% pass-rates at A*-C.

There were some outstanding performances from students.

Julian Gonzalez achieved four A* grades, achieving an A* in Music this year while in year 13, A* in Physics and Further Maths last year when in Year 12 and an A* in Maths while only in Year 11. He will now continue with his studies in Maths at St John’s College, Oxford University.

Mae Morgan achieved A* grades in Maths and Physics and A grades in Spanish and Biology; Mae will now study Nursing at Southampton University.

Barra Liddy also took three of his A levels whilst in Year 12, achieving four overall including an A* and two A grades. Barra will now study Music and Sound Recording at the University of Surrey.

Connor Stalham achieved a clean sweep of A grades in his three subjects  - Biology, Physics and Mathematics.  Connor will now go on to study Theoretical Physics at York University.

Other students who achieved two A grades or more were:

Early indicators suggest that the vast majority of students who applied to university have been successful in their first choice applications.

Headteacher, Martyn Froggett, said: "We are delighted with these fantastic results.  A levels are hard exams;  the students have worked hard and deserve their success.  We wish them well for the future, whatever their chosen route.

"A big thank you also to all the teachers for their tremendous work and support of the students.”

The county council says early indications show approximately 99% of students have been successful in achieving the Level 3 threshold, which is a slight improvement on the previous year.

Councillor Huw Hilditch-Roberts, Denbighshire's Cabinet Lead Member for Education, Children and Young People, said: “We would like to congratulate all students on their individual results and we wish them every success in their chosen pathway.

“These results highlight the continued focus we have on education and is testament to the commitment shown by everyone concerned.

“The results reflect the years of hard work and dedication of students and the tireless support of their teachers in preparation for the examinations and shows that pupils make strong progress over the course of their education.

“Denbighshire has a consistent focus on ensuring that children and young people achieve well and once again highlights our belief that “every child really matters” as was noted in the recent Estyn Inspection.

“Education remains a top priority in the County and we are extremely pleased to see the majority of schools in Denbighshire continue to improve performance.”

The local authority extends sincere congratulations to every individual student achieving this summer and wishes them well in their future endeavours. 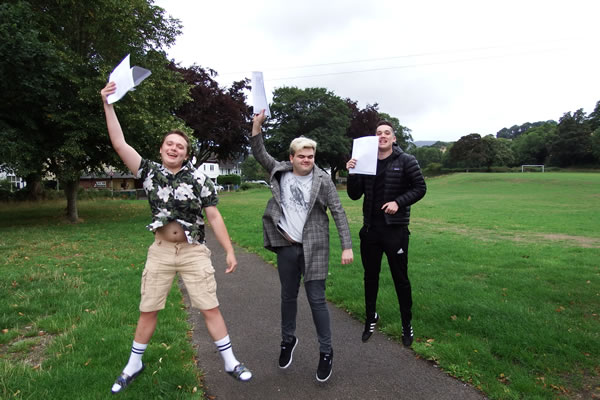 Posted by llanblogger at 1:24 PM