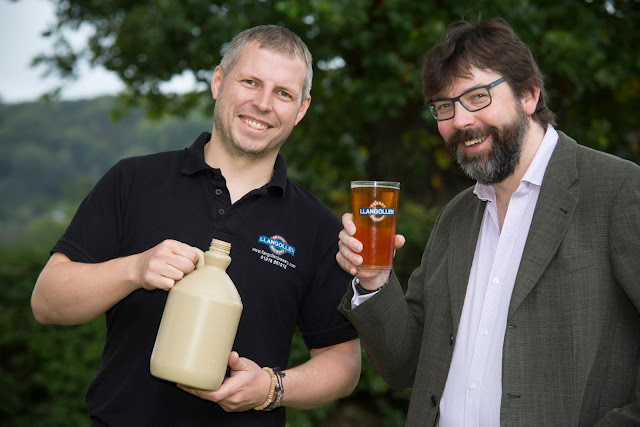 Wales’ most famous and saddest love song has inspired a new beer.

The song Myfanwy tells the tragic story of the unrequited love of a penniless young poet called Hywel ab Einion for a beautiful young noblewoman who lived in Dinas Bran castle high above Llangollen in the 14th century.

The new brew, appropriately a bitter, being unveiled at Llangollen Food Festival later this year is called Heartbreak Hill as a tribute to Hywel’s spurned passion.

It’s the brainchild of Ynyr Evans, the head brewer at Llangollen Brewery, who was moved by Hywel’s response to being rejected by the woman who had captured his heart.

The brewery is based at the Abbey Grange Hotel on the outskirts of the town and was set up by Ynyr and his uncle, the landlord, 10 years ago.

They currently make 1,000 gallons a week and sell their range of beers to around 50 pubs, mainly in North Wales and the North West.

Llangollen Brewery are regulars at the food festival which will be held on Saturday and Sunday, October 13 and 14.

It’s now officially recognised as one of the top 10 food festivals in the UK and pumps around £400,000 into the local economy every year.

According to Ynyr, he was entranced by the story of the lovelorn Hywel and Myfanwy, who was the daughter of the Norman Earl of Arundel, and described as the “the most beautiful woman in Powys”.

Ynyr said: “Myfanwy was exceedingly vain and loved nothing better than being told how beautiful she was.

“Young men came to Dinas Bran from far and wide to seek her affection but she rebuffed them, even if they were rich and handsome because they could not compose and sing poems that did justice to her beauty.

“One man who did have the talent to satisfy Myfanwy’s vanity was the poor but richly talented Hywel ab Einion who lived in the Dee Valley below.

“And one day Hywel plucked up the courage to climb up the hill to the castle with his harp, to sing and play to Myfanwy.

“Hywel believed she had fallen in love with him because while he was playing and complimenting her on her beauty she could neither listen nor look at any other man.

“Sadly, his hopes were dashed when a richer, more handsome and more eloquent lover came along. Hywel, who was discarded and quickly forgotten by Myfanwy, wanders through the forests of the Dee Valley composing a poem to his lost love.

“Hywel was a broken man. His love lay in ruins just like Dinas Bran castle today.

“The story that inspired the song Myfanwy is tragic and touching but not well known today so I thought Hywel’s ardour  and how his heart was broken on the hill above Llangollen should be remembered.

“Heartbreak Hill is perfect for those who want to cry in their beer. In terms of taste it’s quite hoppy and fruity and at 4.5% it’s not too strong.”

“As well as launching Heartbreak Hill on our stand at the food festival, we’ll also put  it into local pubs to see what people think of it.

“We’re really looking forward to being at Llangollen Food Festival because it is so important to us.

"Festival goers are always keen to try something new and different so hopefully Heartbreak Hill will go down well.”

It was a sentiment echoed by festival committee member Pip Gale, who knows a thing or two about alcoholic beverages, as he runs the family-owned Gale's Wine Bar in the town.

He said: "I have lived in Llangollen all my life but I must confess I had never heard about the story behind the song Myfanwy. I’m sure Hearbreak Hill is going to be very popular.”

Among those who can’t wait to give it a try is fellow committee member Phil Davies.

He said: "Heartbreak Hill is a proper craft beer made by a local brewery so it sums up what a lot of the festival is all about really, supporting indigenous producers.

"In addition to Llangollen Brewery, we have a wonderful array of fantastic food producers clustered in the area and this year the festival is promising to be great event once again with a fantastic choice of produce, along with demonstrations from the region's finest chefs so there will be plenty to tempt the taste buds.

The song Myfanwy was composed by Joseph Parry in 1875 and the lyrics were written by Richard Davies.

* To find out more about the Llangollen Food Festival please visit www.llangollenfoodfestival.com

Why is it anger, O Myfanwy,
That fills your eyes so dark and clear?
Your gentle cheeks, O sweet Myfanwy,
Why blush they not when I draw near?
Where is the smile that once most tender
Kindled my love so fond, so true?
Where is the sound of your sweet words,
That drew my heart to follow you?
What have I done, O my Myfanwy,
To earn your frown? What is my blame?
Was it just play, my sweet Myfanwy,
To set your poet's love aflame?
You truly once to me were promised,
Is it too much to keep your part?
I wish no more your hand, Myfanwy,
If I no longer have your heart.
Myfanwy, may you spend your lifetime
Beneath the midday sunshine's glow,
And on your cheeks O may the roses
Dance for a hundred years or so.
Forget now all the words of promise
You made to one who loved you well,
Give me your hand, my sweet Myfanwy,
But one last time, to say "farewell".

Posted by llanblogger at 6:54 AM