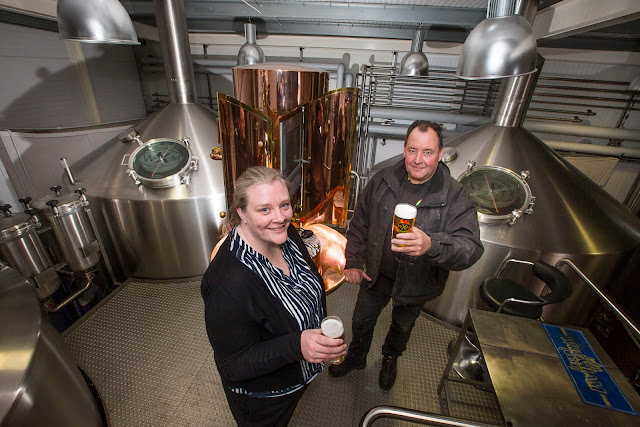 An iconic Welsh beer that made a remarkable comeback is celebrating after landing its biggest ever export orders with major deals in China and France.

Wrexham Lager was served on the ill-fated Titanic which sank in 1912 after hitting an iceberg in the Atlantic on its maiden voyage.
The brewery itself sank in 2002 but the famous beverage was resurrected in 2011 and now it’s going from strength to strength.

The company credits Llangollen Food Festival for helping to introduce its lager to a new audience.

They will be making a triumphant return to the annual festival this autumn in the picturesque Dee Valley town after securing the two international contracts which will catapult its award-winning bottled lager to global success once again.

China is currently the world’s largest market for lager, overtaking both Germany and the US, and the Wrexham-based firm hopes foreign interest in the brand will lead to new jobs for local people.

The new export orders were placed by leading wholesalers and come on the back of international business networking events organised by the Welsh Government which showcased the best of Welsh produce.

Office manager Nic Gaffey said: “The French contract is with a wholesaler which supplies more than 3,000 supermarkets and deli shops. It’s a big order for us and hopefully once the bottles go out they’ll be well-received and the supplier will look to re-order in bigger volumes. We’re hoping for a four-six week turnaround.

“It’s a similar story in Hong Kong where the wholesaler has a licence to distribute alcoholic drink across China.
“The bottles will be sold across China in high-end specialist drink shops selling premium spirits and lager.
“There's a very strong market for high-end lager and spirits in China and from there we’re hoping to get more orders.”

To toast its success, Wrexham Lager will be bringing its purpose-built formal bar to Llangollen Food Festival and will serve a variety of soft drinks, spirits as well as Wrexham lager in draught and bottles and will accompany the firm’s usual demonstration trailer.

The vehicle was imported from Germany and modified over a number of weeks to create the perfect setting for a pint.

The firm will also be selling its popular gift packs to give customers something to take home from the day for relatives and friends.

This year Llangollen Food Festival will be held on October 13 and 14, with thousands of food lovers expected from far and wide.
It’s been named as one of the Top 10 food festivals in the UK by the Independent and Daily Telegraph newspapers, pumping almost £400,000 into the local economy

Nic added: “We’ve been coming to the festival for six years now and really look forward to it. People go along every year and expect to see us - we’ve really become a firm fixture at this event.

“Now we’re increasing interest in Wrexham Lager farther afield which is really exciting. Our first export orders represent a significant expansion and both are firsts for us. We’re definitely getting our name out there with the bigger brands which enjoy a world market.

“There are only five of us here at the moment but our bottles are on the same platform as the likes of Budweiser and Fosters which is great to see for both Wrexham and North Wales.

“We’re already looking for an additional member of staff and as orders increase there could be the potential for additional delivery drivers and others to work on the brewery side which is all good for the local economy.”

Wrexham Lager was first brewed in 1882 by German immigrants and was the first chilled beer in the UK.

The brewery was resurrected in 2011 by the Roberts family and Ian Dale, the former head brewer at Wrexham Lager, and production of the historic tipple was revived. The firm now supplies hundreds of pubs across North Wales, the North West and beyond.

Donna said: “We are thrilled that Wrexham Lager is doing so well and has landed these two major export orders.

“It is a source of great satisfaction to us that the festival has been able to play a part in helping to revive this famous brew which is made using the original recipe.”

It was a sentiment echoed by Phil who added: “Thanks to a whole host of indigenous companies, North East Wales is rapidly establishing a reputation as a centre of excellence for high quality products like Wrexham Lager.
“The food festival is a perfect shop window for the companies who form the backbone of the local economy."

* For more information about Llangollen Food Festival go to www.llangollenfoodfestival.com
Posted by llanblogger at 6:54 AM